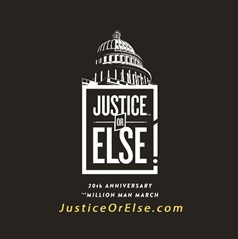 Can wicked rulers be allied with you, those who frame injustice by statute? They band together against the life of the righteous and condemn the innocent to death. (Psalms 94:20-21)

As the Honorable Minister Louis Farrakhan mobilizes the victims of the American “injustice” system, we reflect over the historical record of this system and its harmful intentions concerning the very existence of Black and Indigenous people.

Let’s begin by noting that one of the most wicked uses of law in America can be witnessed in America’s denying her Black slaves the God-given freedom that every human being is created to enjoy.

One particular area of the slave laws or codes that is especially fascinating to me because of all its nefarious implications is the area of slave religion. I remember reading once what the Most Honorable Elijah Muhammad wrote: the “white man would never give you a religion to free you” (paraphrase). And while some have dismissed Mr. Muhammad’s bold teaching, the history of our enslaved ancestors actually serves to vindicate his message.

Professor Albert J. Raboteau discusses this in his excellent book Slave Religion. According to Professor Raboteau,

One of the principal reasons for the refusal of English planters to allow their slaves to receive [religious] instructions was the fear that baptism would emancipate their slaves. The notion that if slaves were baptized, “they should, according to the laws of the British nation, and the canons of its church” be freed was legally vague but widely believed. Repeatedly, would-be missionaries to the slaves complained that slaveholders refused them permission to catechize their slaves because baptism made it necessary to free them. Thus it seemed that the Christian commission to preach the gospel to all nations ran directly counter to the economic interest of the Christian slave owner. This dilemma was solved by colonial legislation. In 1664 the lower house of Maryland asked the upper house “to draw up an Act obliging Negroes to serve durante vita [during life] . . . for the prevention of the damage Masters of such Slaves would sustain by such Slaves pretending to be Christian; And [then pleading for their freedom on the basis of] the law of England.” By 1706 at least six colonial legislatures had passed acts denying that baptism altered the condition of a slave “as to his bondage or freedom.” Virginia’s was typical of the statutes enacted in expressing the hope “that diverse masters, freed from this doubt, may more carefully endeavor the propagation of Christianity,” among their slaves.

What makes this particular law so representative of the wicked desire to legally codify the permanence of Black suffering is the fact that the most sacred text in Christianity—the Christian Bible—makes the claim that freedom is in fact the intended result of Baptism. According to the Bible: “And all who have been united with Christ in baptism have put on Christ, like putting on new clothes. There is no longer Jew or Gentile, slave or free, male and female. For you are all one in Christ Jesus. And now that you belong to Christ, you are the true children of Abraham. You are his heirs, and God’s promise to Abraham belongs to you.” (Galatians 3:28) 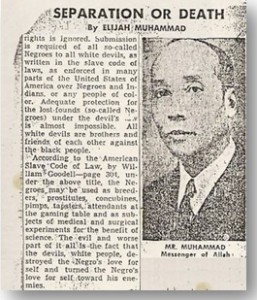 Yet, as we see from the records of history, white slave masters only consented to their Black slaves becoming Christians after they had created laws to ensure that there would be nothing within Christianity to secure freedom for their slaves! What a startling historical fact!

Throughout the history of the Nation of Islam in America, the Most Honorable Elijah Muhammad and the Honorable Minister Louis Farrakhan have repeatedly made the case and justified the call and plea for justice for Black and Indigenous peoples in America. And both men have courageously followed in the tradition of the Biblical and Qur’anic prophets by making it known that America’s continued denial of justice to Black people is an offense to God and will ultimately bring about God’s judgment/punishment against America.

In an article titled Separation or Death, the Most Honorable Elijah Muhammad identified the wicked separate justice system for Blacks known as the Slave Codes. In this article the Most Honorable Elijah Muhammad writes: “According to the American Slave Code of Law, by William Goodell—page 304, under the above title, the Negroes may be used as breeders, prostitutes, concubines, pimps, tapsters, attendants at the gaming table and as subjects of medical and surgical experiments for the benefit of science…”

Goodell’s book is indeed very enlightening and should be required reading for every Black family in America and for anyone who wants to understand the history of injustice in America. Goodell documents powerfully that the criminal justice system in America is founded upon the criminalization of even the noblest aspirations of Black people. 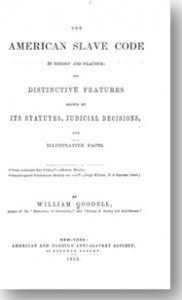 Goodell surveys the various state laws that were created to criminalize the existence of Black men and women. Goodell’s 433-page encyclopedia of wicked Slave Laws includes the following chapters and subject headings:

Education of Slaves is Prohibited (Page 319);

And what makes Goodell’s survey vitally relevant to Minister Farrakhan’s call for Justice in the aftermath of the murders of scores of Black men and women by police and angry whites is Goodell’s examination of laws pertaining to the murder of slaves. I could not help but think about Ferguson, Missouri, police officer Darren Wilson when I read the quote by North Carolina slavery-era Judge Thomas Ruffin.  Goodell quotes Ruffin rendering a judicial ruling that said “cruel and unreasonable battery on a slave” by his owner or hirer is not an indictable offense, and that “there have been no prosecutions of this sort.” I thought of George Zimmerman, who lynched the beautiful young man, Trayvon Martin. And I remembered Michael Slager, the murderer of Charleston, South Carolina, citizen Walter Scott. I thought of both these modern-day lynchers when I read on page 195 of Goodell’s book the words of Judge George Stroud, who said: “the master may, at his pleasure, inflict any species of punishment on the person of his slave.”

As I continued to read Messenger Muhammad’s article, I reflected on our beautiful sister Sandra Bland, whose mysterious death while in police custody was ruled a “suicide.” And before her lifeless body was found hanging in a Waller county jail cell on July 13, 2015, Goodell discussed the death of a young Black woman from the Washington, D.C., area in 1823. On page 181 Goodell notes the death of a “slave girl” in Alexandria, Virginia. It was there that “a slave owner chased his female slave, whip in hand, in open daylight, before multitudes, to the end of a wharf, where she jumped in and was drowned. Verdict of the coroner’s inquest: ‘Death by suicide to escape deserved punishment.’”

I am grateful for the Most Honorable Elijah Muhammad’s review of America’s Slave Code history, as laid bare by William Goodell. It has made me keenly aware of this important history and its direct connection to the attitudes and behaviors of the modern descendants of our former slave masters who murder and terrorize the Black community today.

In the light of this history, it is no surprise that the descendants of the slave masters imitate their slave-holding ancestors. American founding father Thomas Jefferson wrote in his Notes on Virginia: “The whole commerce between master and slave is a perpetual exercise of the most boisterous passions, the most unremitting despotism on the one part, and degrading submissions on the other. Our children see this, and learn to imitate it; for man is an imitative animal. If a parent had no other motive, either in his own philanthropy or his self-love, for restraining the intemperance of passion towards his slave, it should always be a sufficient one that his child is present. But generally, it is not sufficient. The parent storms, the child looks on, catches the lineaments of wrath, puts on the same airs in the circle of smaller slaves, gives a loose to his worst passions, AND THUS NURSED, EDUCATED, AND DAILY EXERCISED IN TYRANNY, CANNOT BUT BE STAMPED BY IT, WITH ODIOUS PECULIARITIES.”

The Most Honorable Elijah Muhammad warned America of what awaits her if she refuses to give justice to his beloved Black and Indigenous people.  So as we move forward to study and operationalize the Minister’s magnificent message delivered just days ago on October 10, 2015 (10.10.15), we should also be aware of the bold and ominous warning made by Minister Farrakhan’s teacher—The Most Honorable Elijah Muhammad.

In his article titled “The End,” the Most Honorable Elijah Muhammad details the “Or Else” that awaits America if she remains a “throne of iniquity” for her ex-slaves.

The American white race is the number one people whom Allah’s anger is directed against as Jehovah’s anger was against Egypt in the time of Moses. Jehovah’s weapons of war used against Pharaoh and His people were the forces of nature: flies, frogs, lice, diseases, rains, hailstones, fire, water and finally the drowning of Pharaoh and his armies in the Red Sea. The same forces of nature are prepared to be used against America with the following additions: terrifying storms (which now harass America); the loss of friendship of the nations; a specifically prepared enemy people under the name “Gog” and “Magog,” whose skill and power will cover the earth for a while; there will be no friends for America; snow, ice and earthquakes, even droughts and dust storms, the natural power of water, wind, terrific cold out of the north, fire from the sun, agitation of the high seas by the magnetism of the moon and sun (which will aid in the destruction of America’s sea power).

(Demetric Muhammad is a student minister and member of the Nation of Islam Research Group.  Reach him online at https://noirg.org/ or at http://www.researchminister.com.) 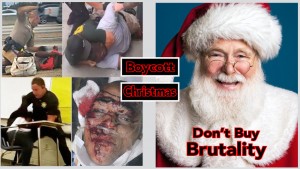