Ever since Jamal Bryant, pastor of Baltimore’s Empowerment Temple AME Church, interviewed the Honorable Minister Louis Farrakhan on the Word Network television show, he has received praise from those working to unify around the needs of Black and oppressed people; however, the interview also brought harsh criticisms from some conservative Christian leaders who felt it was un-Christian-like for Bryant to share the spotlight with the charismatic Muslim leader.

What’s wrong with this? Well, apparently some church leaders and network executives feel it’s wrong for Muslims and Christians to dialogue, especially when it comes to helping Black people. This seems to be the case, as some came down on Jamal Bryant’s ongoing work with Minister Farrakhan to promote justice for a suffering people. 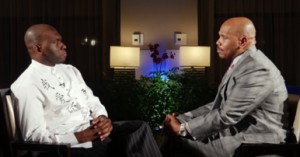 Bishop George Bloomer, host of “Rejoice In the Word,” questioned Bryant’s relationship with the Minister, fearing that he “might lose a brother” after Bryant interviewed the Islamic leader on a Christian television show. “That’s the indictment! That’s my sin—talking to the man!” responded the unapologetic Bryant, despite being victimized for Farrakhan’s namesake.

The backlash continued, as Bryant was recently banned by Daystar Christian Network, which sent him a letter with this message:

We are writing to cancel Dr. Bryant from being on our program. At this time we do not feel comfortable with his comments speaking about Dr. Ben Carson nor are we comfortable with his association with Louis Farrakhan. We are a channel about reconciliation and not division. We apologize for any inconvenience.

Bryant is said to have responded to the hypocrisy of Daystar Christian Network arguing that they have not rebuked any of the Christian evangelicals who “affirmed and prayed for Republican Presidential candidate Donald Trump to become the next president of the United States, even though Donald Trump is inarguably divisive and has made cruel remarks about Women, Asians, Japanese, Blacks, Hispanics, and others.”

For Daystar to suggest me going on stage before a million people calling the name of Jesus is divisive, and to have ought with me calling Ben Carson into accountability for having made his name in Baltimore but never speaking to the plight of black Baltimoreans — yet they continue to re-air old footage of me preaching to raise money for their network! — I want you to know that people want your gift but despise your guts. You have to be careful of people who love your personality but can’t stand your purpose. Be careful of those who want your body but can’t handle your brain — within the last eight years white evangelicals have vilified the presidency of Barack Obama but eight years ago said that republican George Bush was God’s man. I want people to know when man shuts a door – God opens an elevator shaft!

What did Farrakhan do or say that was wrong or untrue that a Christian network feels “uncomfortable” with this relationship? Was it because he enlightened the audience about the Christmas tree as a pagan practice? Was it un-Christian of Farrakhan to quote the Bible that warns Christians not to participate in such heathen activities (Jeremiah 10:1-5)? Maybe they’re upset because he exposed what many Church leaders have known, but withheld from their parishioners.

Are they mad that Christians are uniting with Muslims to put Jesus back in Christmas and kick out Satan—I mean Santa? Every true believer in Christ would do as Jamal Bryant is doing—stand with his brother and friend, Minister Louis Farrakhan, to honor Jesus this season! During the Word Network interview, the Minister voiced, “Don’t make the wicked (who don’t even believe in Jesus) happy by spending your hard-earned dollars with those who hated Jesus!” What true believer in Christ would not honor this—economic withdrawal, the same principle that Dr. Martin Luther King initiated before his untimely death?

Pastor Bryant and Minister Farrakhan understand the words of Jesus, who said: “And other sheep I have, which are not of this fold: them also I must bring, and they shall hear my voice; and there shall be one fold, and one shepherd” (John 10:16). 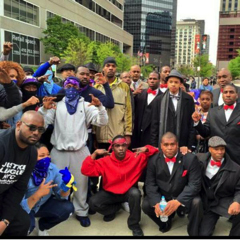 It appears Pastor Bryant is wise enough to recognize that the greatness of Jesus’ work is not limited to a specific denominational congregation. After all, Jesus never built a physical church, because his work extended into the highways and byways, where Pastor Bryant met Muslims amidst the aftermath of the Baltimore uprisings. What God-fearing person would lambaste a man for exemplifying the work of Jesus to deliver God’s people from the vices of Satan’s traps?

Pastor Bryant and Minister Farrakhan didn’t come together for politically opportunistic reasons; instead, they were drawn together because of their love for God’s people after the wrongful death of Freddie Gray resulting in the Baltimore protests. Pastor Bryant and Muslims in the Nation of Islam (NOI) were in the streets standing for our people doing the work of Jesus. That’s how they united—doing Christ’s work—while their critics, including many Black big-named preachers, watched on television.

Pastor Bryant’s work to help save his people and stand with his brother, Minister Farrakhan, should serve as a model for all Christians who really believe in Christ, not just talk about him, proving what the scripture says, “But be doers of the word, and not hearers only, deceiving yourselves” (James 1:22). When Christians target a man for doing the work of Christ, that’s a clear sign that some are gravely deceiving themselves, especially when they aren’t doing the same work.

“The Bloods and the Crips can come together, but the Christians and the Muslims can’t. How in the world can the gangs get together and try to, in fact, bring a better city, but people of two different faiths can’t come together?” Bryant questioned. What has Daystar Christian Network done in this regard? Are these so-called Christian leaders expecting Black Christians and Muslims not to talk to one another while our people are dying daily? 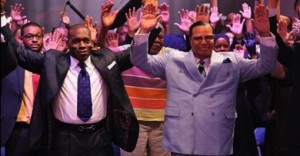 This powerful Christ-based relationship between Muslims and Christians is not about “converting” anyone to another faith as some like Bishop Bloomer feared; instead, it’s about whether or not Christians actually follow the Christ they claim to believe in. “Don’t tell anybody you’re a Christian and you’re not Christ-like!” Minister Farrakhan exclaimed during the interview on the Christian network.

Minister Farrakhan continued, “We have to answer for our weakness and our cowardice in the face of tyranny!” Is this why those pastors are upset—because they are unwilling to stand up against white supremacy and oppression the way Farrakhan and Bryant have been doing? The Minister added, “I want to say to pastors, you must man up and stop preaching a doctrine that makes you a better slave! And don’t put your cowardice on Jesus Christ!”

After decades of being the litmus test of black consciousness, Minister Farrakhan already knew that those who oppose our liberation would come against Jamal Bryant for standing with him to unify the people for justice. “They were giving him [Bryant] hell for even inviting me on his show as a great Christian pastor. That’s because you [detractors] hated me before you knew me,” the Minister explained. Pastor Bryant was equally aware of the consequences noting, “Arsenio Hall was taken off late night television for the lead show in America for bringing Farrakhan on.” These are the consequences for dialoguing with a man whom the white power structure fears—much the same way that many were afraid to speak publicly of Jesus for fear of the Jewish leaders (John 7:13).

Unlike the cowardly leaders who were afraid to speak favorably about a good man, Jamal Bryant publicly expressed his love for Minister Farrakhan in these words:

“I’m so appreciative to be able to mark in history that I lived in the same chasm of time of one of the greatest leaders of our people. Never in the history of this nation have one million people ever gathered, except at your call. I’m appreciative that God preserved your life over these twenty years so another generation will be able to in fact have the reverberations of greatness.”

The mistreatment of Jamal Bryant has exposed the true interests of some so-called Christian leaders. It shows that their concern has very little to do with the true work of uplifting God’s people; rather, they concentrate on nominal labels that amount to nothing but divisiveness.

As co-convener of the historic Justice Or Else gathering on the National Mall on 10-10-15, Pastor Bryant stood with Muslims while boldly proclaiming the name of Jesus Christ as the way to salvation before countless millions of viewers with these words: “I came to speak the name of the man that matters! His name is Jesus Christ, and he was wounded for our transgressions!” What Christians would be upset with him for evangelizing the way of Christ before the entire world unless they have un-Christian-like motives?

If we really understand Christ and his way, there would be no need to criticize Jamal Bryant’s relationship with Minister Farrakhan. Bryant chose to walk the way of Christ—when will other pastors of the Gospel follow suit?

(Ilia Rashad Muhammad serves on the NOI Research Team and is the author of UFOs And The Nation Of Islam: The Source, Proof, & Reality of The Wheels)