(FinalCall.com) – Last week, Jackie Muhammad handily repelled the attack by Jewish racists on The Nation of Islam, in his response to the Simon Wiesenthal Center’s Rabbi Abraham Cooper and his professor-in-residence Dr. Harold Brackman.

It is safe to say that at seven years old Armstrong was probably unaware of these “ungodly” cotton-pickin’ Jewish realities, though there is no excuse for Rabbi Cooper and Dr. Brackman.

Their slander of The Minister titled “The Road to Nowhere: Tracing Farrakhan’s Anti-Jewish Paranoia” exposed to the entire world their profound ignorance of their own Jewish history. Brother Jackie’s missive was at once a blistering rebuttal to the anti-Black rabbi and his cohort and a history lesson correcting their outrageous mythologies.

Unbeknownst to Rabbi Cooper, Dr. Brackman is quoted throughout The Secret Relationship, Vol. 2 (see index)—and for good reason. He confesses in his writings many great pearls of wisdom, including that Jewish rabbis invented the bible’s racist Curse of Ham legend, resulting in all “non-Whites” being targeted for slavery and assorted other historical oppressions forever after. Another Brackman revelation: “[S]lave trading in Brazil became a ‘Jewish’ mercantile specialty in much the same way it had been in early medieval Europe.” More kidnapped Africans went to Brazil than anywhere else in the Western Hemisphere. Obviously, Rabbi Cooper is unaware of this “vicious anti-Semite” sharing his Wiesenthal Center office.

Nonetheless, the two teamed up to produce a spectacularly impotent answer to The Minister’s powerful question “Who are the REAL Children of Israel?” in which we find the following paragraph:

“In New Orleans exactly 100 years before Obama’s election, young Louis Armstrong bought his first cornet with money he made doing odd jobs for an immigrant Jewish family of junk haulers of whom he subsequently wrote: “I was only seven years old but I could easily see the ungodly treatment that the White Folks were handing the poor Jewish family whom I worked for.” Later, he wore in remembrance of the Karnofskys’ kindness, a Star of David pendant given him by his longtime manager and friend, Joe Glaser. No doubt Farrakhan would consider the Star of David around the jazz great’s neck as just another insignia of slavery. But then—as a musician and a man—Louis Farrakhan never measured up to Louis Armstrong. ”

Though we could have picked any of the others, this paragraph is particularly noteworthy. First, Armstrong’s own biographer refutes the idea that the “immigrant Jewish family” had anything to do with the young boy’s first cornet and further states that Armstrong, then ill and advanced in age, probably remembered the story “inaccurately.” Indeed, he had apparently told several different versions of the story. This would have been easily discovered if TRUTH were the goal of Cooper and Brackman, but it is not.

Second, New Orleans was the epicenter of Jewish American wealth and prosperity—the source of which was slave-cultivated and-picked cotton. The Secret Relationship, Vol. 2 has conclusively proven that Jewish merchants in the Deep South had mastered the international markets in cotton and through their religious business networks were shipping thousands of cotton bales down the Mississippi River and around the world. This is exactly why New Orleans’ rabbi James Gutheim (who publicly prayed to God for the success of the Confederate slaveholders in the Civil War) saw the American South as a land where the blessings of providence [and huge PROFITS] “have been showered upon us.” No less of a financial behemoth than Salomon de Rothschild noticed that “What is really quite astonishing here [in New Orleans] … is the high position occupied by our coreligionists. …”

It is safe to say that at seven years old Armstrong was probably unaware of these “ungodly” cotton-pickin’ Jewish realities, though there is no excuse for Rabbi Cooper and Dr. Brackman. After all, according to his own writings, Armstrong was quite busy from 5 am to late in the evenings WORKING as a child laborer for the “kind” and compassionate Karnofskys. And why was young Louis delivering coal to whorehouses for the Karnofskys and not in first or second grade? Well, part of the reason was probably Jewish racism. For when racial desegregation of the New Orleans school system was proposed, Rabbi Gutheim founded a Hebrew school in protest! And why educate a young Black boy anyway? When Armstrong was 13-years old, New Orleans Rabbi Max Heller wrote in the most prominent Jewish American newspaper that “The negro…is the most backward of human races; his contributions to human progress have been insignificant; the Jew, quite to the contrary [belongs] to the best blood of the white race…” Cooper and Brackman have said nothing about this prominent and hate-teaching rabbi, who led the New Orleans Jewish community in Louis Armstrong’s youth.

Cooper and Brackman continue: “No doubt Farrakhan would consider the Star of David around the jazz great’s neck as just another insignia of slavery.” No doubt. The Minister must have been astonished when he toured the notorious slave dungeons in Ghana, where kidnapped Black Africans awaited the horrors of the trans-Atlantic slave trade. And affixed to those dungeon doors was the STAR OF DAVID! As major shippers of African slaves Jewish merchants apparently branded the Ghana slave market as their very own. Indeed, a single Jewish family from France, the Gradises, held a monopoly of the slave trade from the notorious Gorée Island, the infamous slave-trading depot off the coast of Africa. One could easily imagine that the Star of David might hold an entirely different meaning for members of the Black race than it does for Rabbi Cooper and his friends.

Cooper and Brackman correctly note that young Louis Armstrong went from the can’t-see-to-can’t-see “care” of the Karnofskys to that of Mr. Joe Glaser, whom they introduce as his “manager and friend” (Notice that “manager” is first, after which “friend” follows). It turns out that the underworld-connected Glaser was a close associate of Al Capone, the most notorious gangster in American history. But then again so were many, many Jewish hoodlums, who

at this time were in control of the narcotics trade in most inner-cities (The Secret Relationship, Vol. 2, p. 142 note 38). Much of this Jewish drug loot, by the way, ended up financing the establishment of the state of Israel in land stolen from the Palestinians. For this critical support one Jewish scholar even referred to these Jewish drug traffickers as “hoodlum heroes.” Like many Black entertainers Armstrong was bullied by organized crime, leading Glaser from fixing fights for Capone to “managing” Armstrong’s financial life.

The book, “Louis Armstrong, in His Own Words” is where one can find the cornet story, and it also allows us to look deeper into this Black/Jewish relationship showcased and approved by Cooper and Brackman. Armstrong wrote to his “best friend” Glaser in 1955, begging him for his own money. It should be noted that Armstrong is the one who generated ALL of the revenue in this Black/Jewish relationship. Glaser NEVER played any instrument, much less at the prodigious level of Louis Armstrong, but he nevertheless held the purse strings for the great trumpeter. 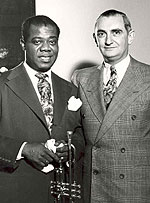 Armstrong begs Glaser for “a little chance to govern myself.” He lightens the potentially offensive request by adding: “I just love your checks in my pockets—‘Oh’ They look so pretty. …” A puppy-like Armstrong told Glaser that the Black man should “always have a White Man (who like you) can and will put his Hand on your shoulder and say—‘This is “My” Nigger’ and, Can’t Nobody Harm’ Ya.’” Armstrong refers to Glaser as his “Boss Man” and signs off his letter as “Your Boy.” He wrote that he “loved” Glaser because “He seemed to understand Colored people so much.”

Armstrong was certainly a powerful cultural figure, but the legacy of slavery, the reality of Jim Crow, and the forces of White supremacy forced him into a subservient and fawning “friendship” that—like so many merchant/sharecropper associations—was characterized by financial exploitation. Armstrong, beaten down by racism, his mind twisted by a grotesque self-hatred, bitterly attacked his own Black people in his private writings; often in the same breath he professed a profound admiration for the Jewish people.

He truly was among those who were deceived into believing, as Mr. Muhammad taught us in Message to the Blackman, that Whites and especially Jews have “the same kind of heart of gold, love and mercy.” But both volumes of The Secret Relationship affirm the Messenger’s words of wisdom: “[T]he white race knows better. They have kept it as a secret among themselves, that they may be able to deceive the black people.”

Rabbi Cooper and Brackman are like Joe Glaser—they want to be able to put their hand on the shoulder of their negro and say, “This is My Nigger and Can’t Nobody Harm Ya.” They miss this kind of obsequious, yessuh-boss negro. The Hon. Min. Louis Farrakhan never was and could never be this type of Black man. That is why they had to reach all the way back to Jim Crow to find “their boy.” Louis Armstrong’s private correspondence is in fact a confused cry for help—the kind of help that only The Messenger of Allah could provide, and continues to provide to Black men and women worldwide. Every Black person should read Armstrong’s own manuscript titled “Louis Armstrong + The Jewish Family in New Orleans,”* for insight into a mind in need of racial rehabilitation. Rabbi Cooper and Harold Brackman see Armstrong’s pain and self-hatred as virtues, worthy of Black emulation. One only wishes that Louis Armstrong in his despair had had the opportunity to meet Minister Farrakhan.