Harold Brackman is one of those “historians” who has been lead flak for the Jewish disinformation campaign so aptly described by Dr. Tony Martin in The Jewish Onslaught. Brackman practices Black history revisionism for the Simon Wiesenthal Center.

Brackman Secret Treatise
Harold Brackman, the embattled Wiesenthal Center hireling, was contracted to produce a “scholarship”-to-order response to The Secret Relationship Between Blacks and Jews. He has produced a pamphlet allegedly to “refute” the now irrefutably documented fact that Jews were heavily involved in the Black slave trade. Unbeknownst to his Jewish bosses, Brackman received his Ph.D. from the University of California on the basis of a dissertation he wrote entitled, The Ebb and Flow of Conflict: The History of Black-Jewish Relations Through 1900. Brackman’s 632-page document casually presents the same material of Jewish slave dealing which he is now employed to refute. A red-faced Brackman now must face what is firmly fixed on paper in his own name. Discussing the Jewish invention of the profoundly racist Hamitic Myth, Brackman wrote:

“There is no denying that the Babylonian Talmud was the first source to read a Negrophobic content into the episode by stressing Canaan’s fraternal connection with Cush.”

The Jewish scholars, he said, advanced two explanations for Ham and his children being turned black. According to Brackman,

“The more important version of the myth, however, ingeniously ties in the origins of blackness – and of other, real and imagined Negroid traits – with Noah’s Curse itself. According to it, Ham is told by his outraged father that, because you have abused me in the darkness of the night, your children shall be born black and ugly; because you have twisted your head to cause me embarrassment, they shall have kinky hair and red eyes; because your lips jested at my exposure, theirs shall swell; and because you neglected my nakedness, they shall go naked with their shamefully elongated male members exposed for all to see…”

When Brackman’s astounding admission was published in The Jewish Onslaught: Despatches from the Wellesley Battlefront, by Wellesley professor Tony Martin, Brackman recoiled and actually pulled his “refutation” pamphlet off the market. Then, in the only known instance of a White Jew bowing to a Black Jew in a matter of Jewish Talmudic history, Brackman denied his initial testimony (“There is no denying…”), and found a Black Jew to claim it is all false. 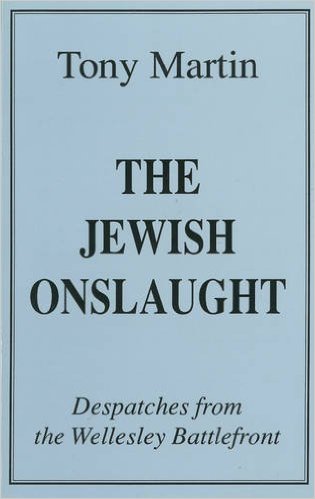 Even Jews are embarrassed by the Brackman harangue which found its way into every Barnes & Noble even as they refuse to sell The Secret Relationship. Lenni Brenner, author of Jews in America Today, titled his review in the Amsterdam News, “Harold Brackman believes in recycling garbage,” and opened with this: “There are some books so bad that I have to apologize for reviewing them. [Brackman’s “book”] is one of them.”

Brackman is the front man for the Jewish position of denial in the battle against the most controversial book in America, The Secret Relationship Between Black and Jews.

Read CAREFULLY the incredible confessions of Dr. Harold Brackman as he reveals the role his people played in the destruction of Black civilization:

Brackman, Harold David, The Ebb and Flow of Conflict: A History of Black-Jewish Relations Through 1900 (Los Angeles: University of California, 1977)

Jews and Black slavery:
p. 6 “For the American Jews, too, the twentieth-century encounter with Blacks grew out of long past roots which, however, remain very alive with contemporary implications. The Jews who struck land in the Netherlands in 1654 found black slaves to greet them. But their introduction to the peculiar institution long preceded the greetings. They had owned slaves –black slaves — in Brazil, and their ancestors had lived for a thousand years in the Iberian countries where slavery had been a thriving concern during the middle ages and where Africans from South of the Sahara were not the unknown quantity they were in Northern Europe. Moreover, they were heirs of a distinctive Jewish law of slavery that continued to develop in its own right and shape underlying attitudes up through the Karo-Isserles Code of the sixteenth century and also a distinctive Jewish lore of race relations with its own special mix of unflattering allusions to the color and character of dark-skinned Africans. The dramatic fault lines of change that run through the subsequent three hundred years make problematical the continuing hold of age-old traditions on immigrant Jewish attitudes….”

Jews and Medievel Slavery
p. 45 “Despite its relatively short duration, however, the medieval era of Jewish slave-trading prominence left a deep and enduring imprint on the rabbinic slave law. In order to accommodate the activities of the Jewish slave merchants, the geonim of the early medieval period and the rabbis of the middle ages properly nullified the talmudic provisions requiring the purchaser of a heathen slave to symbolically incorporate him within the Jewish fold and not to resell him to a Gentile. Since these key provisions formed cornerstones of the earlier Jewish slave law, the whole structure of protections built into it over the course of the preceding two millenia was grievously undermined.”

pp. 47-48 “Yet just because Old World Jewish slaveholders, especially in the Iberian countries, continued to own significant numbers of household slaves but few industrial or agricultural workers, this radical departure from the talmudic slave legislation — which, of course, had been primarily designed to reduce the dangers inherent in domestic servitude — was slow to win general acceptance. The thirteenth century, however, commenced a process of gradual acceptance that culminated three centuries later in its adoption as authoritative by the Karo-Isserles Codes.”

Slavery Permitted in Jewish Law
p. 46 “Two legal fictions were evolved which legitimated slave trading without openly repudiating precedent. The first of these actually seized on a provision of the talmudic slave law itself. For in ruling out forced circumcision, the Sages had declared that, under certain circumstances, a master could purchase a heathen bondsman, retain him for up to a year in hopes of gaining his consent to the operation, but then resell him outside the Jewish fold if such consent was not finally given. Half a millenia after the talmudic era had drawn to a close, one geonic responsa stretched this proviso into a blanket sanction for slave trading by Jews. Answering a question raised by an unnamed Jewish community where most slaves were apparently held as speculative investments, it endorsed the practice of reselling to Gentiles any and all of those who during such a period of trial ownership demonstrated an unwillingness to live up to the rudimentary moral obligations which the Jewish law imposed on them. Maimonides, who headed the slave-trading center of Cairo-Fustat’s thriving Jewish community, loosely grounded his even more sweeping rationale for Jewish participation in the traffic in the same puntative talmudic precedent:

If the slave stipulates at the outset that he will not be circumcised the master may retain him as long as he wishes, even as a heathen, and then he may resell him to a heathen or to a foreign land.”

Jews in the Slave Trade in Sudan
p. 96 “Jewish merchants also participated in the trans-Saharan trade with the Negro states of the Central and Western Sudan. Black slaves formed one of the commodities (though not the most important one) that the medieval Sudan exported to Moslem North Africa; for this reason, they very likely also formed one of the items of commerce dealt in by these camel-riding, merchant Jews. Actually, the involvement of Jews in the traffic with the Sudan seems to have antedated the rise of Islam by many centuries, having its beginnings in the era when their fellow Semites, the Phoenicians and the Carthaginians, established the North African trading communities which were the first to cultivate commercial relations with the Blacks to the south.”

Jews in the Slave Trade in Brazil (where as many as 9 of 10 of African slaves were shipped)
pp. 163-164 “The Marranos in colonial Brazil became soldiers, farmers, mechanics, planters, poets, and even priests; they played in important role in the introduction of sugar cane, owning and administering plantations and mills; and, almost from as early a date, they entered the slave trade. During the 1600’s, in fact, slave trading in Brazil became a ‘Jewish’ mercantile speciality in much the same way it had been in early medieval Europe.“

p. 164 “….The two chief weaknesses of the senhores de engenho were their insatiable hunger for slaves and their chronic lack of ready cash. The New Christian merchants [Marranos or crypto-Jews] had the commercial connections and the capital resources needed to profit from both. They would either import the Blacks directly from Africa or else buy them up cheaply as soon as the slave ships disembarked their cargoes of misery in Brazil; then they would resell to the planters at prices anywhere from 100% to 400% above cost and on terms netting 3% to 4% monthly interest; and finally they would make a handsome, additional profit by marketing in Europe the crop in which their sugar-rich but cash-poor customers paid their debts.”

pp. 164-165 “The system did not reach its full development until the Dutch conquest of the 1630’s — when New Christian merchants openly turned Jew and when Old Christian planters no longer had a sympathetic government to turn to for relief. Its roots, however, stretch back to the first century of Portuguese rule itself. Indeed, by the opening decade of the seventeenth century, Brazilian New Christians were already deeply involved in the trade of slaves to Spanish as well as Portuguese America. In 1618 an official at Buenos Aires deplored the ‘facility with which Jews enter and leave this port, without it being possible to stop it, since they are all Portuguese and mutually conceal each other.’ Later Dutch power proved just as effective a means of entree as had the earlier Portuguese possession of the Asiento, causing another such official to protest in 1636 that Brazilian Jews controlled the trade of Lima ‘from the vilest African Negro to the most precious pearl.’ ‘When every allowance is made of the exaggerations of interested parties and hysterical witnesses,’ C.R. Boxer concludes, ‘it is clear that Jews from Brazil did in fact play a major role in the Peruleiro trade of bringing in slaves from Africa and taking out silver from Potosi.'”

Jews of North America in the Slave Trade
p. 185 “New York Jewry was not active in this traffic, not because of any scruples, but because this commodity more properly concerned the rum-distilling Rhode Islanders and the rice and indigo planters of South Carolina….From 1715 to 1743 the New York Jewish shippers and their Gentile partners imported fewer than eighty slaves. There was [only] one notable exception. In 1717 and 1721 the “Crown” and the “New York Postillion” –owned by Nathan Simson and his New York and London Associates — sailed into the northern harbor with a total load of 217 Negroes. The shipments came directly from the African coast, two of the largest slave cargoes to be brought into New York in the first half of the eighteenth century.”

Southern Jews as Slave Owners
p. 268 “One in four Southern Jews held slaves — exactly the same proportion that held for all Southern whites. They actively participated in the internal slave trade, owning three of Richmond’s seventy, and four of Charleston’s forty-four, slave-auctioning emporiums. They produced the full panoply of classic Southern types — from plantation overseer to plantation mistress to plantation-owning practi[ti]oner of the aristocratic refinements of interracial sex, and from temporizing Unionist Whig to fire-eating Democratic politician to embittered poor white hating nothing so much as free Blacks. And they even tailored their important contribution to Liberal Judaism in the United States to fit the prevailing Southern Temper: Isaac Harby, the lay pioneer of Jewish Reform in the South during the 1820’s, was also a precocious South Carolina fire-eater; and Charleston’s Congregation Beth Elohim, the first American Reform congregation, was also the first to raise an explicit membership bar against ‘people of color.'”