Starbucks seemed to be making all the right moves in response to the recent racial controversy in which the bigotry of its Philadelphia store manager instigated the arrest of two Black male customers waiting to meet a business colleague. The white man showed up just as they were being handcuffed and placed under arrest for not ordering quickly enough from the Starbucks menu.

The company’s CEO, Kevin Johnson, took charge of the situation and expressed his regrets and called the incident “reprehensible.” He flew to Philadelphia to personally apologize to the Black men, who had been locked down for eight hours before being released without charges. Black Lives Matter organized protests at the store and only through an iPhone video and Black Twitter did the issue reach international prominence. As a result Starbucks announced that it would close all of its more than 8,000 US stores on May 29 for “racial bias training” in light of the incident.

And that is where it all collapsed for Starbucks’ experiment in racial healing. Inexplicably, Starbucks announced that the notoriously racist spy agency Anti-Defamation League—the ADL—would be conducting the “training.” And with that ill-conceived move, all the racial good will generated by the Starbucks CEO fizzled, fueling the calls for boycotting the 28,000-store coffee empire.

“…Starbucks was on a decent track until they enlisted the Anti-Defamation League to build their anti-bias training. The ADL is CONSTANTLY attacking black and brown people.” 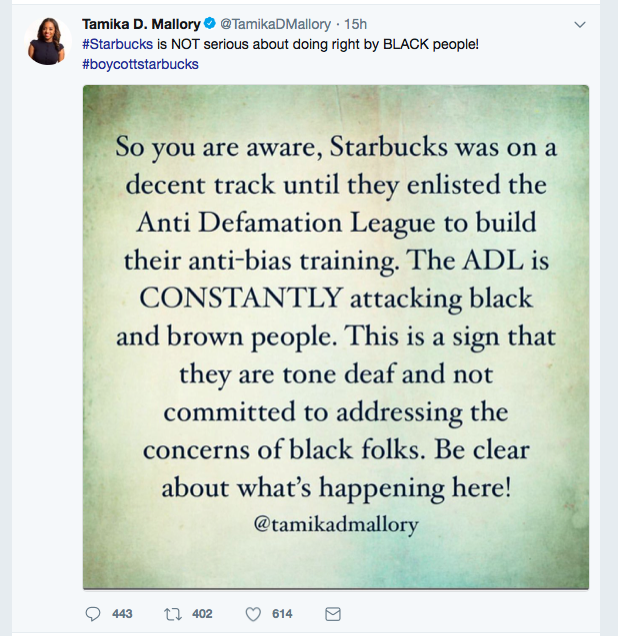 Sister Tamika was being kind. According to Jewish writer Lenni Brenner, “the ADL has been a fanatic opponent of Black liberation.” Like J. Edgar Hoover’s FBI, the ADL has a chillingly racist résumé of hate:

• In 1913, the father of the ADL, Leo Frank, is found guilty of the rape and murder of a young Christian girl. Frank tried desperately to pin the heinous crime on two Black men, who were nearly lynched for Frank’s crime.

• In 1942, the ADL boasts in a secret memo that a “Negro employed by us” proved “quite instrumental” in an FBI raid on the Nation of Islam’s Chicago mosque resulting in 82 arrests.

• In 1979, the ADL pressured Pres. Jimmy Carter to fire United Nations ambassador Andrew Young when he protested the one-sided U.S. policy that was biased against the Palestinians.

• In 1983, the ADL launched a racist attack on Black presidential candidate Jesse Jackson when he pledged that his Middle East policy would be fair and balanced, with consideration of the plight of the Palestinians.

• In 1992, the ADL vigorously opposed the election of Nelson Mandela to the presidency of South Africa. It openly supported a man who was funded by the white apartheid government to undermine Mandela’s own organization.

• In 1993, the ADL was indicted for spying on 12,000 individuals and organizations and sharing its illegally obtained information with the white apartheid South African and Israeli intelligence agencies. The groups included the NAACP, the Mandela Welcoming Committee, the Rainbow Coalition, and anti-apartheid South African groups, as well as Black American citizens like Rep. Ron Dellums, the Rev. Jesse Jackson, and Min. Louis Farrakhan.

• In 1995, the ADL tried to disrupt and destroy the Million Man March, which was attended by 2 million Black men. It portrayed Black men as too ignorant to decide their own leadership without the ADL’s assistance.

• The ADL accused movie director Spike Lee and entertainer Michael Jackson of being “anti-Semites,” claiming that they portrayed Jews in unfavorable ways, even as Jewish-run Hollywood blatantly and routinely portrays Blacks as criminals and whores without an intratribal peep from the ADL.

• The ADL has quietly attacked affirmative action for Blacks in many legal cases in America. In the early 1970s, the NAACP Legal Defense Fund began filing lawsuits challenging the racist hiring and promotion practices of many American institutions. The ADL filed briefs opposing the NAACP—which shocked the NAACP legal teams. In cases concerning school admission, inclusion programs for minority businesses, and job promotion quotas—all designed to correct obvious historical racial discrimination—the NAACP soon realized that the ADL was one of the “most vociferous opponents of affirmative action.” The ADL in court documents even likened affirmative action to the laws of Hitler’s Third Reich!

• The ADL is aggressively “training” American police forces in the same brutalizing tactics the Israelis use on Palestinians in Apartheid Israel. The wanton murders of unarmed Black men, women, and children occur at the hands of police forces that have been Israeli-trained by the ADL. Ironically, the Starbucks incident occurred at the same moment that Durham, NC, became the first city in the US to bar its police department from training in Israel. It decreed: 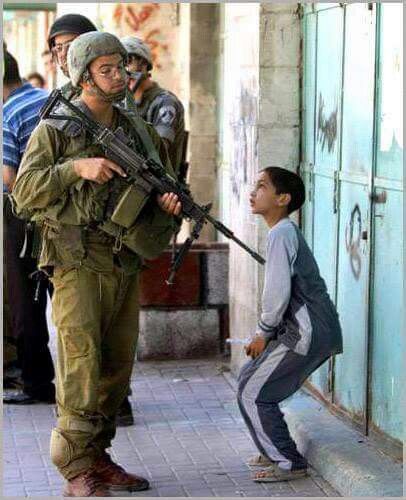 “The Israeli Defense Forces and the Israel Police have a long history of violence and harm against Palestinian people and Jews of Color. They persist in using tactics of extrajudicial killing, excessive force, racial profiling, and repression of social justice movements,” according to the petition. “These tactics further militarize U.S. police forces that train in Israel, and this training helps the police terrorize Black and Brown communities here in the US.”
The history of the Black-Jewish relationship in Philadelphia has never been good, but Starbucks has just made it far, far worse. The ADL has operated as the heir to Hoover’s notorious COINTELPRO program—an American version of the Nazi SS. Think about that while sipping your next macchiato.
-30-