The annual “Oscar” pageant of Hollywood’s motion-picture industry saw a reported 43 million tune in to see a veritable Caucasian extravaganza that showcases—not the latest in movie excellence, but the degree to which White people simply intend to use their power over movie images to lock Blacks in the sub-basement of humanity.

A very quick review of the racial output of Hollywood in the last couple of years confounds the intelligent among us. A movie about Black maids (The Help), one about a Black butler (The Butler), one about a Somali criminal (Captain Phillips), another about a mistreated “free” man-turned-slave (12 Years a Slave)—as if the hellish treatment of his brethren still in captivity was not more of a tragedy.

The first Black person to “win” an Oscar was Hattie McDaniel, who played a head-of-the-household mammy slave in the 1939 drama that glorified the Southern confederacy, Gone with the Wind. The 2014 “winner” of the same award played a cotton-picking field slave who is abused and repeatedly raped by the white man who “owns” her. Black progress? Where is the Hollywood slave heroine that utterly slayed her enemy and escaped to freedom? (See the history of rape in slavery.)

But who keeps putting these degrading images before us, and why do they continually depict us as victims, criminals, buffoons, and otherwise subservient, lowdown anti-Black characters? If there is an accusation about which the Jewish “anti-Semitism industry” is most sensitive, it is the charge that “Jews run Hollywood.” It might seem that the Jewish scholar Neal Gabler ended that debate in 1988 with just the title of his book, An Empire of Their Own: How the Jews Invented Hollywood, but the Jewish “watchdogs” like Abraham Foxman of the Anti-Defamation League (ADL) continue to deny the obvious.

Minister Louis Farrakhan laid out the truth of this assertion in Part 20 of his Time & What Must Be Done series, in which he stated and then proved that “They—The Satanic Jews—are the power in Hollywood and other fields of endeavor.” Not only did Gabler show that Hollywood has always been a Jewish monopoly, he also made a further point that the ADL is desperately afraid to deal with. Said Gabler: “Ultimately, American values came to be defined largely by the movies the Jews made….What is amazing is the extent to which they succeeded in promulgating this fiction throughout the world.”

Amazing indeed. And therein lies the reason why Foxman must beat back with the most bitter anti-Black intensity the truth of Minister Farrakhan’s clear assertion. For much of that “fiction” that Jews have “promulgated” to the world is some of the most viciously racist anti-Black propaganda ever seen. In fact, for their lasting damage, these Jewish-created racist images have no equal.

Let us take a moment to fully understand this issue of “Jewish control.” Abraham Foxman would like to define the issue as “control of Hollywood,” but that position is crafted to elude the far more important point in truly understanding the reel relationship between Blacks and Jews. Jewish studio moguls could have used their century-long media monopoly to portray the multi-dimensional Black reality to the world, and thereby establish a relationship between Blacks and Jews and others that is mutually respectful, equitable, and even friendly. But the result of this Jewish monopoly has had the very opposite effect—and it was all by Jewish design.

Let us start at the Jewish beginning. The first Hollywood blockbuster was the 1915 movie Birth of a Nation. According to Gabler, it was financed by Jews from Brookline, Massachusetts, and it was a spectacular production that packed movie houses around the world. It generated more money than any other film up to that time, enough for one of its Jewish distributors, Louis B. Mayer, to start his own studio—Metro-Goldwyn-Mayer (MGM)! 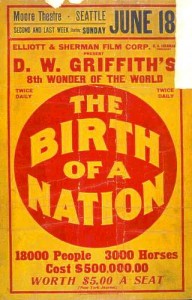 It did not bother any of these profit-hungry merchants that Birth of a Nation rewrote the history of the Civil War to make the Ku Klux Klan terrorists the heroes of the film and the saviors of a grateful white nation. It depicted Blacks as criminals and rapists, simpleminded, barefoot chicken thieves, who had no useful or rightful function in America except as slaves. For the many white immigrants pouring in to America by the millions at the time, this full-screen endorsement and approval of the most ferocious anti-Black violence was their first and most influential introduction to “American values.” The film itself—made by Jews—became the best recruiting tool the KKK ever had!

It only got worse from there. By the 1940s Jews were the heads of all the major movie studios in America. Jews with familiar names such as Zukor, Goldwyn, Schenk, Mayer, Selznick, Thalberg, Cohn, Laemmle, Lasky, Schenck, Fox, Shulberg, Warner, and Loew ran every aspect of the movie business. One of their gentile screenwriters, Dalton Trumbo, with utter disgust, described the anti-Black output of these Jews in 1943: “[They made] tarts of the Negro’s daughters, crap shooters of his sons, obsequious Uncle Toms of his fathers, superstitious and grotesque crones of his mothers, strutting peacocks of his successful men, psalm-singing mountebanks of his priests, and Barnum and Bailey side-shows of his religion.”

The ADL’s own founding charter of 1913 reveals that the very reason it formed was for the purpose of curtailing the negative images of Jews that were then prominent on stage and screen. It says: “The effect of this on the unthinking public has been to create an untrue and injurious impression of an entire people and to expose the Jew to undeserved contempt, and ridicule ….”

So right from the start, the ADL fully understood the damage that filmed images could cause to the reputation of a people. And ever since then, under the watchful eyes of the ADL, Hollywood Jews sanitized their own movie images; but in film after film these same Jews ran the images and the reputation of Blacks into the gutter. Feeding the public movies replete with mammies and uncle toms, happy slaves and pickaninnies, thieves, hustlers and murderers, Jew
s assaulted the consciousness of the entire world with racism in its purest form. By foisting the enmity of the world upon the Black man—as their ancient rabbis did through the invention of the Curse of Ham—Jews enabled themselves to scapegoat, exploit, and dominate a “cursed” people to achieve unhampered their own success. And yet we are expected to stand mute even as the “best film” award goes to 12 Years a Slave, made by Arnon Milchan, who recently admitted that he is an Israeli Mossad propaganda agent. 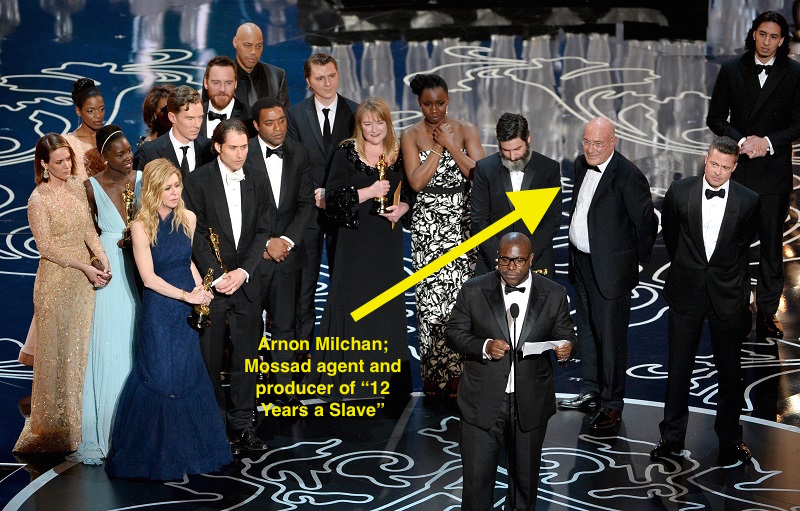 The previously mentioned movie Gone with the Wind, made by Jew David O. Selznick, was actually Adolf Hitler’s favorite movie! Not for its “entertainment” value, but because of how effectively it reinforced a clear racial hierarchy just as he wanted to do in Germany. And even if they couldn’t find a Black man or woman to degrade themselves in one of their films, these Jews actually invented a new form of “entertainment” to accomplish their racial propaganda purposes. Jewish entertainers smeared black paint over their faces in a perverse ritualized race mockery known as “blackface minstrelsy.” While in this blackface “disguise,” these Jewish “entertainers” engaged in an invented behavior they insisted to the world was intrinsic to and the essence of the Black man and woman!

According to Jewish scholar Michael Alexander in his book Jazz Age Jews: “Jews performed this kind of minstrelsy…better and more often than any other group in America. Jewish faces covered in [black paint] were ubiquitous.” But certainly this is ancient history. It has gotten better since the 1940s, right?

Just last week, veteran Black actor and star of the NBC show Blacklist, Harry Lennix, was interviewed by Tavis Smiley, where he discussed the current state of Hollywood’s racial output: “[W]e’re always playing despicable and depraved people—not dimensionalized, not fully human, subhuman, in point of fact. That three-fifths human being thing is something that was propagated, that gained a foothold….”

All of this is the undeniable product of another people—a hostile people—who have controlled our Black images, and clearly they don’t intend to change. And that is not the whole story. The Asians were introduced to us by these same Jews as devious backstabbers during World War 2; the Native Americans were shown to us to be a primitive and savage people worthy of the American Holocaust they still suffer. In Hollywood, the shifty-eyed Arabs and Muslims have no other worldly “prayer” but to strap on a bomb and curtail the civilized Western world.

“The Jewish people have the force to hurt; and they also have what it takes to help. I’ve asked them: ‘Since your people put ours in this condition, why don’t you help me raise our people up from the degraded state that your people have put them in.’ Do you think I’m wrong to ask them for this? I’m not asking them for a ‘check’ to give to silly people who are going to give it right back to them! I hope that you will…see how you are being exploited; how Hollywood has painted you in a stupid way, where we are the ‘clowns’ and still the same ‘Steppin’ Fetchits.’”[1]

At what point do we embrace this sage observation and reclaim our own Black images, our humanity, our pride from the people who Jesus Himself called the “Liars and the Fathers of Lies”? Let us use our access to cyberspace and the power of media to positively reach and influence with well-rounded, balanced, comprehensive portrayals of ourselves rather than remain victims of the Satanic Jewish image-makers. In 1915, the Jews launched their racist vision of America in Birth of a Nation. One hundred years later Blacks have only “progressed” to the Israeli Mossad’s vision of 12 Years a Slave. Certainly, with the power of knowledge, our creative genius, and a unified approach, we can do better than that.

(Tingba Muhammad is a citizen of the Nation of Islam, whose articles appear in the explosive books DEFENDING FARRAKHAN, Books 1 & 2. Join the conversation online at https://noirg.org, and on FaceBook.com/NOIResearch, and Twitter@NOIResearch.)