The government of Jamaica warmly welcomed thousands of members of the Nation of Islam to their beautiful island in what can only be described as a triumph for Caribbean progress. The Honorable Minister Louis Farrakhan’s forthright message decrying the continual neo-colonial enslavement of the Caribbean actually came to life when the Jamaican authorities—obviously acting on behalf of the British crown—denied entry to two great thinkers in the Black freedom struggle. Trinidadian JAMAAT-Al-Muslimeen leader Yasin Abu Bakr and Guyanese writer Gerald A. Perreira were turned away by “authorities,” an act proving only that Jamaican jurisprudence still comes from under a powdered wig—and not from the minds and hearts of free Black men and women.

In an intemperate and disingenuous column in the Jamaican Observer, Mark Wignall addressed the politically motivated detention of Imam Abu Bakr. But Wignall has neither the ability nor London’s permission to think his way to his own position on the matter. Instead, he starts his “argument” exactly where whites demand he begin—having uncritically accepted their labeling of the Imam as a “religious extremist.” And dutifully, Wignall repeats the term six times in his brief commentary, often, it seems, to convince himself that it is true. He parrots the white conservative rhetoric of Islamic “gunpoint theology,” whining of how “they want to take our freedoms.” The rest is direct from the current Israeli Mossad playbook: “rise of the murderous and fanatic faction,” “sleeper cells of Jamaican Muslim extremists,” who are “robotic and scary.” And most wickedly, he asks if “Farrakhan’s bash” was “just the rallying point for a more determined and radical push in the region?”

Let us hope so, because it is Wignall, who, by embracing the Eurpean’s view of the region’s disgracefully racist and genocidal history, is the real extremist, whose chained and seasoned mind is fast becoming a relic of the negro past.

It is ironic indeed that Wignall should write from a Jewish and Israeli point of view. For it was the sleeper cells of sugar-trading Jewish extremists who originally flooded the islands and the region with African slaves. According to Jewish historian Albert Hyamson, the economic position of the Jews was “so strong that they practically monopolized the trade in sugar, rum and molasses.” The Jamaican Jews warehoused so many Africans and treated their human “product” so cruelly that the white Gentiles actually had to pass legislation limiting the number of African slaves the Jews could have. Even though this legislation helped reduce African slavery, Jewish historians actually cite this legislation as an example of “anti-Semitism”! This is the religious extremism that drove the slave trade and colonialism, yet Wignall would happily go along with them. After all, these Jewish extremists very likely “rescued” his ancestors from Africa.

On the other hand, the Black men and women enslaved on the vast sugar plantations desperately wanted freedom, justice, equality, and separation from the murderous European extremists. Who stood for them? Who fought for their freedom?

Thank God for the Muslims in Caribbean history. According to research published by John Geipel in History Today journal (volume 47, issue 8, 1997), the Hausa of northern Nigeria, the Mandinga, and the Fula “were solidly Muslim” and fought their Christ-claiming European slavemasters with stunning success. These freedom fighters were known as Maroons, and not only did they escape the sugar plantations to gain their own freedom, but they returned to free enslaved Africans and to fight the oppressors in what Geipel actually refers to as “jihad”—the first known in the western hemisphere.

Geipel’s description of those New World Muslims is far more accurate than the Hollywood-enhanced imagery embraced by the Jamaican Observer’s negro propagandist. Geipel writes that the Hausa, particularly, were esteemed “for their imposing bearing and courteous manners, were frequently superior, in both intellect and erudition, to their masters and many, notably the alufás (imams), were literate in the Ajami (Arabic) script and well versed in the Koran.”

Their fatal flaw, of course, was that they would not succumb to the Jewish and Christian extremists, who demanded a life-long pound of flesh from every African man, woman, and child. 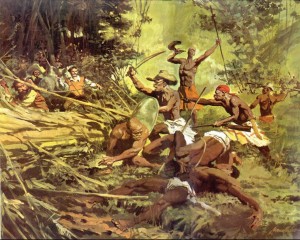 Maroon community of Brazil was known as Quilombo dos Palmares

Mark Wignall’s Europeans did not give up easily. As the Muslim-led freedom fighters worked tirelessly to set up their own independent, free, and democratic societies, it was Jewish extremists who set up militias entirely for the purpose of suppressing the slave revolts and forcing the Black man back onto their plantations. As a matter of fact, writes the highly respected Jewish historian Cecil Roth, the slave revolts “were largely directed against them [the Jews], as being the greatest slave-holders of the region.”

The first Hebrew prayer ever composed in the so-called New World was titled “Old Hebrew Prayer in Time of Revolt of the Negroes,” and it beseeched the God of the Jews: “Oh, Lord our King!…save and deliver those who are setting out to fight our enemies the negroes, cruel and rebellious.”

According to The Secret Relationship Between Blacks and Jews, when these prayerful extremist Hebrews captured the Black leaders of the revolts, they cut off their hands and awarded them to each other as trophies.

The Honorable Minister Louis Farrakhan came to Jamaica to help liberate the Jamaican minds of this extremist mentality once and for all time. In his masterly address, Minister Farrakhan drew from the limitless legacies of Jamaica’s National Heroes and called for a new educational paradigm that truly frees the Caribbean from the Euro-extremist traditions of slavery and genocide. He called on the massive African Diaspora to emerge from this mental servility and to teach and train its youth in how to unify, take control of the regional economy from European bankers and exploiters, and manage its vast material resources for its own growth and development. Mark Wignall’s extremist mind sees such a call to action as properly the “white man’s role” and fights off the Maroons who come to free him.

Leaders Imam Abu Bakr and Gerald A. Perreira embraced the message of Minister Farrakhan and the Nation of Islam, and their presence in spirit represented the regional unity that will establish—finally—true Black independence. Jamaicans showed that they are tired of centuries of European extremism. Their government foolishly barred two strong Black freedom-fighters from their island, but the long-suffering Black victims of white extremism responded by packing the stadium and overwhelmingly embracing the Muslims and the Honorable Minister Louis Farrakhan.

(Tingba Muhammad is a citizen of the Nation of Islam. Visit the NOI Research Group online at www.noirg.org and join the conversation on Facebook.com/NOIResearch and Twitter @NOIResearch.)