NOI Research Group (NOIRG.ORG) Before Christopher Columbus was commissioned by the rulers of Portugal to sail the ocean blue in 1492, he was sailing the coast of Africa in the slave trade. It is in Africa where he very likely learned about the “New World” and the ocean currents that might get him there. The Africans had long traded amicably with the Indigenous peoples of the “New World,” and their mariners had gained knowledge of the ways and methods of distant ocean travel. 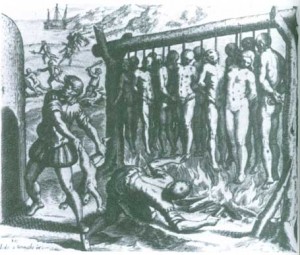 On his second trip to the New World, Columbus brought cannons and attack dogs. If a native resisted slavery, he would cut off a nose or an ear. If slaves tried to escape, Columbus had them burned alive. Other times, he sent attack dogs to hunt them down, and the dogs would tear off the arms and legs of the screaming natives while they were still alive. If the Spaniards ran short of meat to feed the dogs, Arawak babies were killed for dog food.

Columbus himself found evidence during his voyages that he was not the first to “discover” anything. He was told by the peoples of Hispaniola (Haiti) of black men who had appeared on the island before him, and they showed him what the black men had left there: lances tipped with an alloy of gold that was prevalent in West Africa’s Guinea. In Trinidad, Columbus discovered the people there with textiles and clothing identical to that which he had seen in Guinea. In actuality, Columbus’s voyages were only notable for the total destruction he had unleashed upon the Indigenous peoples of Africa and the Caribbean. One of Columbus’s marauders recorded the first rape in the New World:

“While I was in the boat I captured a very beautiful Carib woman [and] I conceived desire to take pleasure…but she did not want it and treated me with her finger nails in such a manner that I wished I had never begun. But seeing that…I took a rope and thrashed her well, for which she raised such unheard of screams that you would not have believed your ears…”

The cruelty of Columbus toward the people of the lands he invaded only escalated from there. According to his own words, quoted in The Secret Relationship Between Blacks & Jews, Vol. 1:

“They are without arms [weapons], all naked, and without skill at arms and great cowards, a thousand running away from three, and thus they are good to be ordered about, to be made to work, plant, and do whatever is wanted, to build towns and be taught to go clothed and accept our customs.”

Cities began to spring up all over the island of Hispaniola. The traffic in slaves—African and Indian—grew rapidly.  Who is Christopher Columbus and where does he come from? There is no shortage of research and scholarly speculation about Columbus’s origin. Italy, Portugal, and Spain have all laid claim to him, but there is strong speculation that he may have been a Jew. The entire book Sails of Hope, by the notorious Nazi-hunter Simon Wiesenthal, strongly argues that Columbus was Jewish. The fact that another of Columbus’s contemporaries claimed he “talked after a practiced slave dealer” probably clinches this speculation, given that the masters of the slave trade at that time were Sephardic Jews. More evidence comes from The Most Hon. Elijah Muhammad, who wrote that Columbus was a “half-original man,” and this, we hypothesize, puts Columbus in the category of a little-known but powerful group of people called the “Lancados.” In the mid-1400s—about the time Columbus would have been born—Portuguese King Dom Manuel colonized the African coastal islands in order “to whiten the race,” as he put it. Two thousand Jews, their children, as well as their orphans went to those African islands specifically for that “whitening” purpose. They kidnapped and raped African women, and the mixed-race progeny, called Lancados, were sent into the African mainland for the express purpose of trading in Black human beings. So brazen were these light-skinned newcomers that they even implanted themselves in the local population as “African chiefs.” 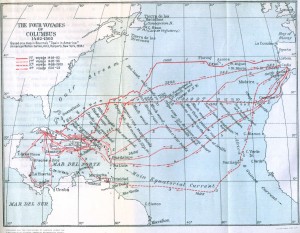 These Lancados developed the sugar trade and pioneered the slavery-intensive model for the plantation economy that would soon thereafter dominate the western hemisphere for the coming centuries. White historians hide these malevolent half-breeds under the name “Africans” when they claim that “Africans sold each other.” Columbus was probably one of these Lancados. Columbus Day has been a holiday in America since 1937. His legacy of genocide, slavery, rape, and robbery makes Columbus the perfect idol for whites. Let us join our Native American brothers and sisters and stay far, far away from these hateful Caucasian heroes, lest we forget their true nature and actual history and make the same mistake our Indian and African ancestors made in 1492 and allow the next Columbus on our shores.