The recent beheadings as a terroristic act are a horrifying addition to the false-flag arsenal of the Israeli Mossad and the American CIA, whose ongoing oil wars have now gotten out of hand. The authenticity of the several filmed beheadings has been seriously disputed, but they represent the next level of a propaganda war that began with 9/11 and continues to spiral out of control. No serious analyst of the events of September 11, 2001, still actually believes any part of the government story, and that scares the Western leaders immensely. The work of the 2,300-strong Architects & Engineers for 9/11 Truth is conclusive, and the next phase of the 9/11 inquiry—“If not the Muslims, then Who Did 9/11?”—is now being masterfully presented by researcher Christopher Boll 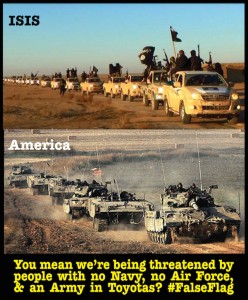 yn, who is now on tour and revealing so much explosive evidence of the direct involvement of the Israeli Mossad that it may actually transform the relationship between Jews and Christians forever.

The September 11th “attacks” were the ultimate false-flag operation, but as mind bogglingly huge and complex as that covert action was, it was not enough to achieve the West’s oil-snatching Middle East/Africa goals. So a new Islamic enemy had to be created that possessed almost mythical powers of terror, destruction, and control, to recapture a populace that is increasingly difficult to provoke into war mode. Thus, ISIS or ISIL or IS and its vicious beheadings were born—not of any mosque, cave, or Qur’an, but of the satanic mind of a Western ruler rapidly losing control. That it was hastily conceived and ill formed is to say the least. The U.S. government would have us believe that a band of desert-roving masked marauders, in a fleet of Toyota pickup trucks (the smaller V6, not the muscly Tundra)—having no navy, no air force, no space program, no government, no nukes, but having prodigious social media skills on Facebook and Twitter—is able to frighten into massive war an advanced $700+ billion/year military that has all of those things and more. They tell us that “ISIS-ISIL-IS” was unknown until yesterday, though America and her allies have installed the most sophisticated communications system outside the United States to support hundreds of military bases in the very area where this alleged “ISIS-ISIL-IS” rules. This “ISIS” or “ISIL” or “IS” is simply fodder for the dumbest of the dumbed down.

Satan has now brought his wicked scheming to America: There are reports of a Black man in the heartland of Oklahoma who allegedly converted to “Islam” and “beheaded” a coworker. If it were true—even reporters at the police press conference seemed to doubt the story [listen at 9:44]—such an act is the work of a demented and unholy monster. And those who can see the workings of a deceiver from a mile away knew that it was only a matter of moments before the Jewish-controlled media connected this wicked act to Minister Farrakhan and the Nation of Islam. After all, the NOI has been blamed for everything from the Kennedy assassination to last year’s “anti-Semitic” murder of three Christians by white Ku Klux Klansman Glen Miller.

It turns out, however, that the grotesque act of beheading is a cherished tradition that has followed European “civilization” as it forced itself upon the globe. One might start with the guillotine, the head-removal apparatus invented by a Frenchman and a German. It got its heaviest use during the French Revolution in the 1790s and remained in use up until 1981. The Germans severed 16,500 heads with the device, and the American-backed South Vietnamese used guillotines left over by French occupiers to execute their enemies. England’s kings and queens lopped off thousands of heads, as in Ireland, where the British Sir Gilbert Humphrey decapitated anti-British rebels and laid their heads like curbstones along the path to his tent. In 1996, a white Georgia state representative in America unsuccessfully sponsored a bill to replace the state’s electric chair with the guillotine. 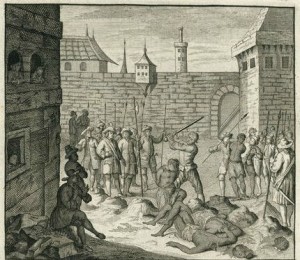 Terroristic decapitations were one of the most important European exports to their colonial outposts. Bounties were awarded for the heads of Indians, and scalping—the violent removal of the top portion of the head—became a staple part of European invasions. One Jewish merchant named Hayman Levy of Pennsylvania shipped many goods to the western frontier, including scalping knives and “Negro slaves.” Another Jewish merchant named Sigmund Shlesinger entered in his diary that he had “Scalpt 3 Indians…for purpose of collecting bounty.” Just two years after the alleged “first Thanksgiving,” one could reap a £50 reward in Massachusetts for the scalp of an Indian. According to one scholar, “Hunting redskins became…a popular sport in New England.” The Spanish invaded the Caribbean and considered their swords to be properly sharpened if they could slice the heads off Indian children with a single stroke.

In 1811, 21 runaway Blacks were executed by decapitation—their heads stuck on poles along the roads as a warning to others. Thomas Jefferson’s nephew chopped a Black boy to pieces while alive and crying for mercy, throwing each severed body part into a raging fire—only pausing to lecture the other slaves about the requirements of their enslavement. And of course there are the many, many, many dismemberment lynchings, wherein white Americans cut off the heads, fingers, hands, toes, and genitalia of their Black victims to be displayed on country store counters.

Church-going, Marquette University-enrolled, honorably discharged United States Army veteran, and Welsh-German homosexual Jeffrey Dahmer decapitated 16 of his victims between 1978 and 1991 before converting in prison to born-again Christianity. The most famous line in the European’s most popular fairytale, Alice in Wonderland, is by a queen who yells, “Off with their heads!” Noted fairy tale writers Hans Christian Andersen and the Brothers Grimm “entertain” youth with gruesome beheadings and dismemberments.

Headlessness is part of the white man’s world—and his mis-leadership is proving that everyday.

There is an important message that Satan is conveying by taking this horrifying European tradition of beheading, imposing it on Islam, and then further trying to connect it to The Honorable Minister Louis Farrakhan. Young men across America and all over the world are flocking to Islam because of its appeal as a peaceful religion, reflecting the natural order of life itself. As the institutions of this world fail them and indeed turn against them, these young men recognize that remaining a slave in a fast falling Caucasian world is hell itself. But Whites do not want Black America to have potent leaders who will stand up to offer clear purpose and direction, so Satan must define Islam and its adherents as blood-thirsty, maniacal perpetrators of the most inhumane behaviors.

The true head of Black America is in the mind of The Honorable Minister Louis Farrakhan. Whites listen carefully to his 58-part The Time And What Must Be Done lecture series and know that this extensive body of advanced knowledge and divine guidance will soon become the curriculum for the awakening Black American. They know this. They know that he is the embodiment of Black unity, and this scares them to death.

These horrifying beheadings are Satan’s attempts to turn a gruesome European practice into an Islamic ritual and thus frighten the Black body from accepting its rightful and divine leadership. It is a desperate ploy, but it should not deter us from our mission to achieve true Black unity, true self-sufficiency, and separation. The best and most powerful response to this onslaught of anti-Black and anti-Muslim propaganda is to click on PART ONE of The Time And What Must Be Done and hear the true voice of leadership for our future.