How White Folks Got So Rich begins with a quote from Dr. Neely Fuller, Jr. “If you do not understand white supremacy—what it is, and how it works—everything else that you understand will only confuse you.” And as a confused people both Blacks and white are now able to decode the mystery of White Supremacy. How White Folks Got So Rich is exactly what it say it is. And that is why this pocket-sized, 136 page book with disgraced billionaire Donald Sterling on the cover has become a serious weapon in the war against the forces of racial oppression. The book’s Introduction says it all:

The foundation of American white supremacy sits tenuously on a rickety base of myths, lies, and deceptions. A century and a half after the end of legal slavery, white families average $113,000 in wealth; but for Black families, it’s just $5,600. More than a quarter of Black families have no assets at all. The wealth gap between whites and Blacks has quadrupled since 1984 and is now wider than it has ever been. Even high-income Blacks have assets of only $18,000, while middle-income whites have $74,000.

And to add insult to this never-ending injury, Blacks make up an unlucky 13% of the U.S. population but own a meager 1% of America’s total wealth—and whites own almost all the rest. While wealthy whites are getting even richer, ALL of the financial gains made by the Black middle class over the last 30 years are being totally wiped out by this latest economic downturn called the Great Bush Recession.

Blacks have been in America longer than any other people save the American Indian, yet, of the ten richest American Blacks, there is only one billionaire, Oprah Winfrey, and she is ranked 607th on the Forbes list of wealthiest Americans. ALL ten are in the entertainment field, and their total wealth ($7.6 billion) amounts to less than one-tenth that of the richest white man, Bill Gates ($78.9 billion). 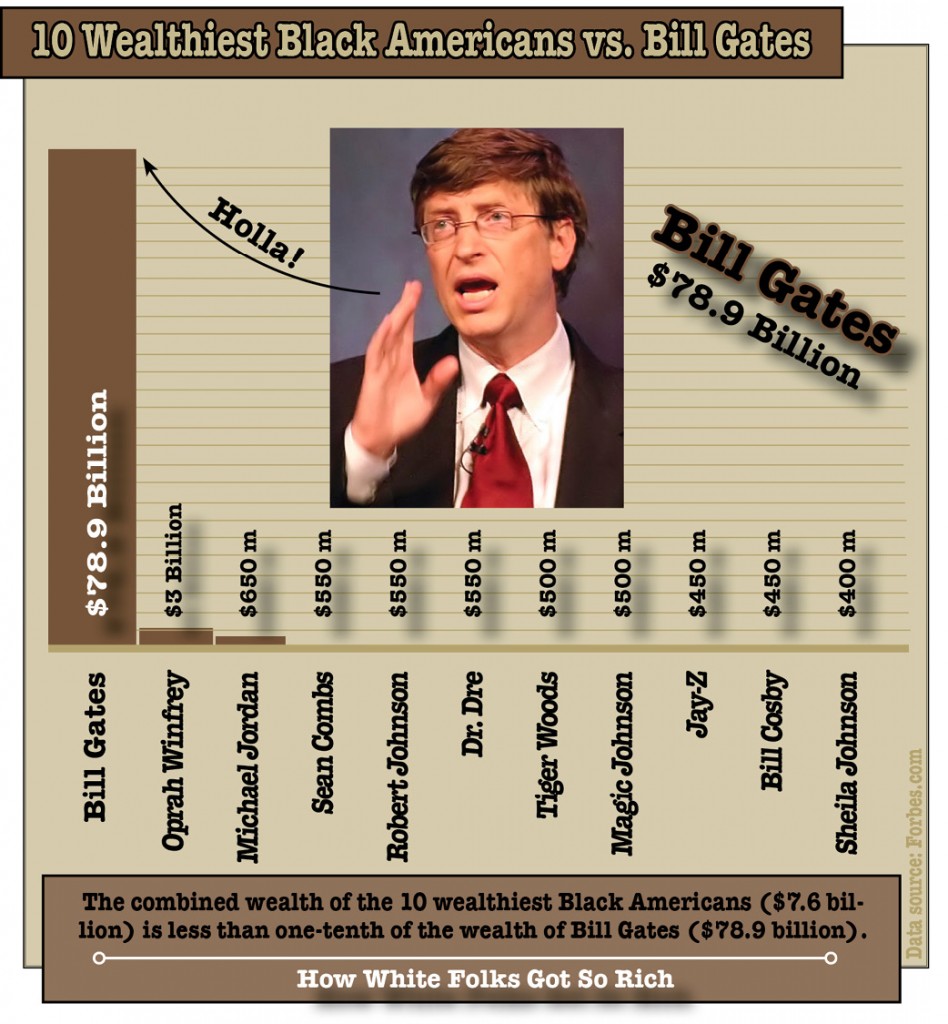 But how exactly have America’s whites gained their unprecedented 20-1 wealth advantage? Was it by engaging in “hard work,” by “investing wisely,” by “pulling themselves up by their own bootstraps,” or by “playing by the rules”? It was none of that. The public airwaves are nonetheless filled with the self-righteous pronouncements of media commentators anxious to “advise” Blacks to “do what whites do” if they want to succeed in America.

Not only have whites spun a fairy tale about their achievements in America that whitewashes a very violent and bloody history, but they promote a parallel fantasy that “non-whites” are both congenitally lazy and naturally inferior and are thus responsible for having comparatively nothing. The truth is a whole lot nastier than that.

Every mechanism of government, religion, and private enterprise was craftily employed to specifically hamstring Black prospects for success after slavery, and some of those institutionalized injustices were devilishly ingenious. All sectors of American society harmonized to institute a series of “affirmative action” initiatives which gave white people exclusive material advantages that have nothing whatever to do with either merit or “hard work.”

Take America’s favorite billionaire, Los Angeles Clippers basketball team owner Donald Sterling, born as Donald Tokowitz to immigrant Jewish parents. Despite all the fury directed at him in 2014 for his embarrassing caught-on-tape racist rant, he has made a million dollars 2,000 times. He started out as a slip-and-fall attorney, gaming the legal system for a tidy fortune. Then he acquired a pair of large apartment buildings in Los Angeles with lots of Black, Latino, and Asian tenants, at a time when real estate ventures in L.A. were seeing returns of over 6,000 percent! Instead of appreciating the Black contribution to his astronomical fortune, Sterling was quoted as complaining that “black people smell and attract vermin” and that “hispanics just smoke and hang around the building,” preferring instead Korean tenants because “they will pay the rent and live in whatever conditions I give them.” His racism was so pervasive that the government actually sued him, winning for the tenants the largest award ever.

In 1981, he acquired the Clippers for $12.5 million, in a sport whose most notable talent is almost all Black. A Black Clippers executive sued Sterling when he not only found out how woefully underpaid he was compared to whites but also discovered that he worked for a man who wanted to fill his team with “poor black boys from the South and a white head coach.” Throughout this racial madness, and a series of sex-based charges, Sterling’s wealth just grew and grew.

Recently, Sterling told his “girlfriend”: “It bothers me a lot that you want to broadcast that you’re associating with black people,” and “The little I ask you is…not to bring them to my games.” Far from being penalized, Sterling’s racial vomit actually inflated the team’s value from a mere $1.6 billion to a selling price of $2 billion—an incredible 15,900 percent return over his 33 years of Clippers ownership!

So with each successive expression of racial neanderthalism Donald Tokowitz Sterling only inflated his net worth. Sterling’s racism appears to be his best and most lucrative investment yet!

And that is exactly how white folks get so rich.

Though he is wildly wealthy, no one will claim that Donald Tokowitz Sterling achieved his wealth by any remarkable intelligence. Sterling himself is the best evidence that his whiteness alone secured for him an “all-access pass” to an exclusive network and system of wealth generation that guaranteed him and others of his white-skinned brethren financial success.

And it is not just his racist thinking—it is his racism coupled with his exploitation of Black talent. He said of his Black players:

Not a single paying basketball fan pays to see Sterling do ANYTHING, yet Sterling—like the plantation master who never touches the cotton—believes that it is his “talent” that is irreplaceable.

Blacks have generally accepted and internalized Sterling’s delusion, even though all the math shows Blacks to be the true power brokers. Basketball star LeBron James’s decision to return to Cleveland will garner him $22 million a year, but that decision alone instantly doubled the value of the Cavaliers team to $1 billion. When the season starts, he will add $48 million a year to the downtown economy, and crowds are expected to rise by 6,500 fans a game, who each will pay at each of the 41 home games an additional $180 for parking, hotel rooms, meals and drinks at restaurants and bars—and LeBron’s games in other cities will have a similar effect. So who “gives” Sterling and the majority owner of the Cleveland Cavaliers, Dan Gilbert, their “food, and clothes, and cars, and houses”?

The Rev. Dr. Martin Luther King, Jr., asked, “Why does white America delude itself, and how does it rationalize the evil it retains?” He concluded quite harshly that white people’s belief in the fairness of America “is a fantasy of self-deception and comfortable vanity.”

Donald Sterling answers Dr. King for ALL of white America. Nothing has been more profitable than racism—not platinum, not gold, not oil.

This book examines America’s complex architecture of white supremacy. From the executive, judicial, and legislative branches of government to private enterprise of every type, from the media to the labor unions to the religious institutions—ALL have agreed on one thing: the white race must prevail, always, in all ways, by any means necessary.

As Dr. King said, white America may have deluded itself, but Blacks need not continue to play along. The odious underbelly of white people’s oft-claimed “superiority” must now be exposed. This is the untold story of American white supremacy. This is How White Folks Got So Rich.