Americans may be surprised to uncover the early history of a sick, disease-ridden Colonial America—and the enslaved Black man that saved it. When White America was suffering from the smallpox disease (the same smallpox deliberately used to kill off the Native Americans), the colonists were dying by the hundreds without a solution to their self-induced epidemic.

This brings us to Cotton Mather—if that name rings a bell, it’s probably from an old high school history lesson. He was an acclaimed Puritan minister in Boston during the 18th century when the smallpox disease was killing his fellow White Christian community in large numbers. He led a campaign to promote the inoculation method, which involved introducing some of the smallpox virus into a person’s body to build immunity to the disease. What’s fascinating about Mather was actually not him, but his Black slave Onesimus, who in 1706 showed Mather this inoculation process that he had learned from his childhood in Africa.

Mather was prompted to share Onesimus’s knowledge with the suffering Colony, but because this treatment was introduced by a Black slave, it was difficult to win over the White Christians to accept it—even though it could heal their disease-ridden society.

The opposition to Mather’s inoculation proposals was based largely on racism, not on medical arguments alone, because this method was a knowledge foreign to Whites but practiced by the Eastern, Islamic, and African world. Some of Mather’s esteemed critics, like Dr. Emanuel Timonius and Jacobus Pylarinus, accused him of using “negroish evidence,” which didn’t meet their white standards. Despite the colonists dying in epidemic numbers, several Colonial leaders rejected a solution to the problems they were facing because it stemmed from a Black man.

Since this radical treatment proved to be more effective than any of the previous ideas they had employed, inoculation was eventually accepted, but only after years of suffering and hundreds of Bostonians had already lost their lives. Where would America (and the world) be had its leaders not yielded to the right guidance of a Black slave, who brought a controversially foreign idea that embodied the solution for a dying nation?

This is a question that must be answered today because America is suffering from all manner of spiritual, mental, physical, and social diseases. As it was during the smallpox epidemic of the colonial period, America is suffering from the very disease it inflicted upon the darker people of the world—white supremacy. This racist ideology has been systemized, institutionalized, and normalized, and it is the very poison that has contaminated every aspect of American society: education, religion, politics, the criminal-justice systems, the social fabric, and the economic sphere. While this sickness has infected the entire globe, America’s leaders do not seem bothered enough to eradicate it, even if the solution is right in their midst.

Like Onesimus, there is a Black man in America who has been voicing a radical solution to this country’s sin-sick problems. The Honorable Minister Louis Farrakhan and his teacher, the Most Honorable Elijah Muhammad, have traced the pathology of this country’s enslavement, subversion, and mistreatment of the world’s indigenous people to the disease of white supremacy—but will America accept their proven solutions to these problems?

Armed with nothing more than truth and right guidance, the N.O.I.’s work is based on cleaning up the mess that White America has made of her former slaves. The poverty, criminal behavior, and mis-education witnessed in America are all sicknesses that the Muslims aim to combat. In fact, the men of the N.O.I., known as the Fruit of Islam (F.O.I.), have a longstanding track record of going into the most violent gang-terrorized, drug-infested communities and cleaning them up without the use of arms or carnal weapons. In the 1980s-1990s the F.O.I. (dubbed the Dope Busters) marched into housing projects like Mayfair Mansions in Washington D.C. and several others in various cities, where they virtually ended crime and drug abuse with results that even the police departments were unable to attain. 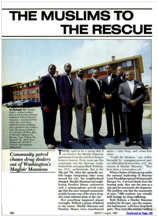 Even the U.S. Department of Housing and Urban Development (HUD) recognized Farrakhan’s methods as the solution to a national problem, by establishing contracts with N.O.I.-affiliated security companies. The reduction in crime and drug activity that resulted from the F.O.I.’s work remains unmatched. Even Black conservative and longtime critic of the N.O.I., Armstrong Williams, in his article titled “The Nation of Islam Could Be Chicago’s Savior” stated, “the Nation of Islam brings to the table things that other private security firms and the police don’t: Credibility within the community.”

The solution for America’s sick inner-cities was obvious, even for Farrakhan’s Jewish detractors like Marc Stern—former legal director of the American Jewish Congress (AJC)—who acknowledged that the N.O.I. performs a service that no other organization can do. Still, the AJC, the Anti-Defamation League (ADL), and other Jewish interest groups pulled political strings to rescind and obstruct N.O.I. security contracts, resulting in Black communities being overcome once again by the influx of drugs and violent gang activities.

Armstrong Williams acknowledged what other citizens, legislators, and even Jewish groups acknowledged—that Farrakhan and the Nation of Islam have proven to be effective at curbing violence and drug abuse among Black people!

Well, what’s the problem? It’s the same problem Colonial America faced when Whites refused to accept an unconventional healing for their sick country—the solution came from a Black man. The insanity of white supremacy disables America from accepting viable solutions for its grave problems.

The racist actions of powerful Jewish groups like the ADL and AJC prove they are the enemy to the progress of Black people and America, because they not only refuse to accept but actively thwart the proven solutions to America’s core problems. They were the primary forces behind the HUD Contracts with NOI Securities being rescinded and obstructed, resulting in Black families and communities being re-victimized by drugs and violence.

After Armstrong Williams publicized that the N.O.I. should be supported to curb violence in Chicago’s toughest neighborhoods, Morton Klein, National President of the Zionist Organization of America, called on presidential candidate Ben Carson to disassociate himself from Williams. This is yet another example of how influential Jews try to control and intimidate Black leaders for publicly acknowledging the good works of Minister Farrakhan—much the same way the Bible depicts how Jews threatened those who spoke favorably of Jesus:

“But no one would speak about Him publicly for fear of the Jews.” (John 7:13)

America’s leaders are faced with a dilemma: continue to ignore the proven solutions coming from a Black man while the country plummets into ignominy, or accept the reality that Farrakhan offers a unique pedagogy of teaching and training that restores America’s downtrodden to upstanding leaders in unprecedented ways.

In the Holy Qur’an, Allah (God) warns, “And indeed We sent (messengers) to nations before thee then We seized them with distress and affliction that they might humble themselves.” (Al-An`am 6:42).

Aside from the natural disasters, economic woes, and constant political turmoil, America is drowning in a sea of grave dissatisfaction on the verge of total chaos, and Farrakhan is offering a lifeline. Wouldn’t it be foolish for a drowning person to reject a lifeline simply because it came from a Black man? Today America is suffering on many levels and its leaders are rejecting the man and the methods that will inoculate it against its core disease of white supremacy—a disease most Americans fail to even recognize despite its severity. The beautiful display of love, unity, peace, and order demonstrated on the National Mall on 10-10-15 gave America yet another glimpse of the potential healing America could benefit from if she accepts the solution coming from a misunderstood Black man, the Honorable Minister Louis Farrakhan.