This week, the Black players on the University of Missouri football team drew an uncompromising line of scrimmage across the campus and challenged white authorities to cross it. Indeed, it was a brutal awakening for Missouri and for the nation. It took less than 40 hours to achieve their objective, and since their talent brings more than $35 million in annual revenue to the college, that amounts to about one million dollars for every hour they spent in protest. It was the most powerful lesson in economics that the college could possibly teach them.

Hear The Honorable Minister Louis Farrakhan’s message to the students of the University of Missouri: 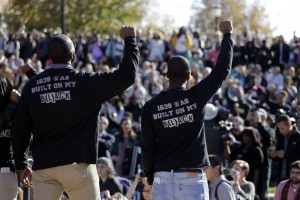 “1839 Was Built On My B(l)ack,” referring to Mizzou’s founding on slave labor

The racial stare-down that began on Saturday night was not the first incident of racial strife on that campus. In fact, it came at the end of a long history of racial marginalization and campus discord that spanned years. Black students had tried the acceptable routes to achieve justice: They complained through the campus grievance process—to no avail. They took to sign-carrying protests—and the president tried to run them down with his car. One student even invoked the Gandhi method of hunger striking—but authorities seemed content to watch him die. Students implored, petitioned, entreated, preached, and pleaded for their righteous cause, but none of this moved white authorities from their long-held position of “So What.”

It did, however, move a group of Black men—young men who had been written off as having no concern other than fulfilling their own parochial needs for wealth and fame. These Brothers were of a different mind—they had a mindset that set them miles apart from that rude stereotype. They said simply, We will boycott until justice is equally applied. In America, this simple statement should be unnecessary, but another incident last year in Missouri just down the road in Ferguson has made it an imperative. 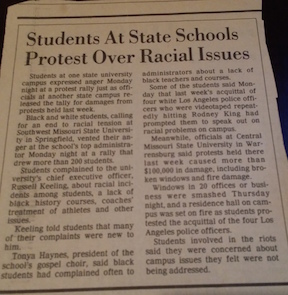 Clipping from a 1991 Missouri newspaper

Immediately, those who understood the economic implications of such a stand by these elite Black athletes were both stunned and deeply affected. Next, the team’s coaches confirmed that not only had Blacks on the team notified them of their boycott, but they were in full support! The players then made it plain to the world what motivated them, tweeting the mantra of the Rev. Dr. Martin Luther King: “Injustice anywhere is a threat to justice everywhere.”

It was clear. These Black men had a profound appreciation for the philosophy of Dr. King, and a selfless conviction to carry it out even at the potential loss of their own personal hopes and dreams for their athletic careers. The Honorable Minister Louis Farrakhan has implored us to reevaluate the life and teachings of Dr. King as he evolved in his thinking and beliefs, and to pay particular attention to the profound message he gave in his very last speech. On his last day on earth Dr. Martin Luther King asked his followers to practice “economic withdrawal” as a strategy to gain justice. He explained that if an oppressor is “not prepared” to treat Blacks with justice, then “our agenda calls for withdrawing economic support from you.”

Dr. King’s words are powerful, but a day later he lay dead on a Memphis motel balcony. With his murder his enemies moved quickly to reinterpret his words and to obscure the very clear protest strategy he set for us going forward. At University of Missouri, our young brothers looked beyond those deceptions, grabbed that baton, and moved it forward to victory in truly record speed. The team made its statement at 9:08 Saturday night. The president must go, they said. Almost assuredly, every university provost, vice president, administrator, chancellor, and dean got the word by 9:09. By 9:10, we can guarantee that emergency meetings, conferences, summits, and pow-wows had been hastily arranged. By 9:11, the university’s finance administrators had probably apprised them of the dire realities they were facing: the football program brought in $35 million to the university—not to mention the millions the games infuse into the local economy on game days with the influx of fans to the stadium. And not a single one of those fans is paying to see the president or his white staff, faculty, or administrators—not one. No doubt, the number crunchers showed them how much damage an empty stadium would inflict on the other Division One universities on their game schedule—all because Mizzou refused to deal with its racist ways. 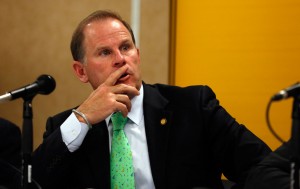 Former University of Missouri president Tim Wolfe, “love”-speaking and psalm-quoting, on his way out. $35 million seems to have finally touched his heart.

University leaders, with the help of a calculator, wisely concluded that the team’s Black boycott power was greater—far greater—than that which upholds their culture of campus white supremacy. By Monday at high noon, a formerly smug and defiant white president was speaking of “love” and quoting the psalms on his way out the door. A mighty white Goliath had collapsed before David’s well-placed economic volley—just as Dr. King projected. The step these football players have taken is breathtaking, and the message quickly spread around the nation that the economic clout of our Black athletes is far more significant than they had ever believed.

In fact, the college sports system is one of the last remaining vestiges of slavery. Just as slave-grown cotton was the commodity that propelled the American economy into world dominance, so it is today with sports. Black college athletes are financially uncompensated and kept poor, yet their unique skills and talents draw millions of paying fans. The University of Missouri football team has drawn the world’s attention to this grotesque exploitation. Dr. King said, “We don’t have to argue with anybody. We don’t have to curse and go around acting bad with our words. We don’t need any bricks and bottles. We don’t need any Molotov cocktails.” We have the power of refusal—we can refuse to feed an intransigent beast of a system and starve it until it plays fair or dies. 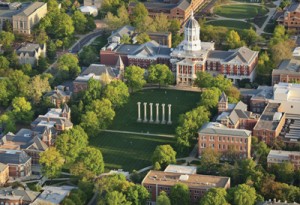 University of Missouri: Built on OUR [running] Backs!

By following Dr. King’s sage advice, the Missouri players have crossed into legend, and encouraged other athletes to rethink their financial relationship to the colleges that exploit them. Christmas is next. Beyond the injustices on the Mizzou campus, the highly militarized police forces across America have declared war on Black, Brown, and Red youth. Our Christmas dollars uphold the economic system that turns a blind eye to these violent enforcers and buys their Kevlar armor, their tasers, stun guns, and their SWAT-team gear. Our unthinking Christmas money madness finances those who want to build apartheid walls to keep Latinos out of America. It is our Christmas dollars that finance the Israeli butchery against the Palestinians. Our Missouri brothers and their campus-protest colleagues have put all these issues on a new economic playing field. We have seen a powerful example of Dr. King’s strategy in real time. Let us now show Santa that same Missouri football spirit.

1820:  The Missouri Compromise regulated slavery in the country’s western territories by prohibiting the practice north of the parallel 36°30′ north, except within the boundaries of the proposed state of Missouri. The compromise was agreed to by both the pro-slavery and anti-slavery factions in the United States Congress and passed as a law in 1820, under the presidency of James Monroe.

1857: Dred Scott was a slave in Missouri who in 1846 filed legal suit in St. Louis Circuit Court seeking his freedom. Scott claimed that he and his wife should be granted their freedom because they had lived in Illinois and the Wisconsin Territory for four years, where slavery was illegal. The United States Supreme Court decided 7–2 against Scott, finding that neither he nor any other person of African ancestry could claim citizenship in the United States, and therefore Scott could not bring suit in federal court. Moreover, Scott’s temporary residence outside Missouri did not bring about his emancipation as it would “improperly deprive Scott’s owner of his legal property.”
2014: The “Ferguson unrest” began the day after the fatal shooting of Michael Brown by Darren Wilson, a white police officer on August 9, 2014, in Ferguson, Missouri. The unrest sparked a vigorous debate in the United States about the relationship between law enforcement officers and Blacks, the militarization of the police, and the use of force doctrine nationwide. It catapulted Black Lives Matter and similar youth activist groups into the international spotlight, groups that now dominate Black politics.
2015: Black University of Missouri football players refused to participate in any football-related activities until racial issues were addressed by the school’s authorities. Football generates $35 million in revenue for the school, so the players’ demands were met within hours of the boycott announcement. It marks the first time a united economic boycott by college athletes was employed to demand racial justice. 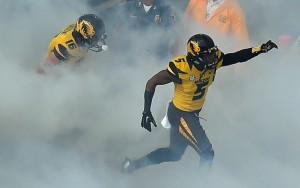