Historically, Jews have been the prime beneficiaries of American white supremacy (as can be measured by their collective wealth; far above any other white sub-group), and thus are motivated to keep TRUE Black leaders who might confront that wicked system far, far away from the Black masses. Rabbi Dr. Bertram W. Korn is just one of many scholars quoted in The Secret Relationship Vol. 2 who readily admit this incredible scapegoat role Blacks have played for Jewish benefit.

Blacks MUST start to see the Black-Jewish relationship through the eyes of Jewish scholars (many of whom are rabbis) and question WHY every Black leader who confronts white supremacy in a significant way has been falsely and tactically labeled “anti-Semitic”? Not anti-Catholic, not anti-Republican, not anti-union, not anti-American–but anti-JEWISH. Think about it.

“The Negroes acted as an escape-valve in Southern society. The Jews gained in status and security from the very presence of this large mass of defenseless victims who were compelled to absorb all of the prejudices which might otherwise have been expressed more frequently in anti-Jewish sentiment….[T]he road to social and economic advancement and acceptance for many Jews was smoothed by the ever-present race dis-tinction which imputed superiority to all whites.” 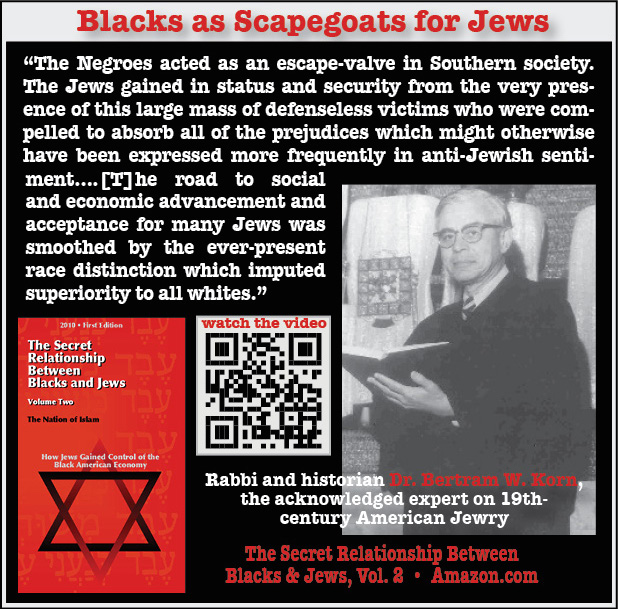