A historic plenary session, “The War on Islam: 9/11 Revisited, Uncovered & Exposed,” will be held Saturday, February 18, 10 a.m. EST at the downtown Cobo Convention Center. Discussions and evidence concerning the true perpetrators and possible conspirators responsible for the 9/11 catastrophe will be shared during the upcoming Nation of Islam’s Saviours’ Day Convention in Detroit.

The Honorable Minister Louis Farrakhan and the Nation of Islam have invited credible and concerned 9/11 experts to share their research on this critical issue. Some of their findings and questions are shocking and raise serious questions about whether the full truth about the attacks on the World Trade Center has been revealed. The tragedy of 9/11 has been used to attack civil liberties at home and instigate major wars abroad. Most recently, the Trump administration has used 9/11 to justify a ban on immigration from seven Muslim nations.

Panelists for the plenary session will include investigative journalist Christopher Bollyn; Richard Gage of Architects and Engineers for 9/11 Truth; and Dr. Kevin Barrett, an Islamic Studies scholar and author. They will present actual facts and offer listeners the opportunity to reason with their accounts of what happened and reach their own conclusions about a crime against humanity still causing death and confusion.

Muslims in the Detroit area, in particular, and all people are invited to hear these presentations about the 9/11 tragedy, because many are convinced those responsible were not Muslims at all. Minister Farrakhan, just five days after 9/11, at a September 16, 2001, press conference, said:

“… I remember President Johnson made the war in Vietnam the centerpiece of his administration and a great lie was told, that the Congress produced the Tonkin Gulf Resolution that led to 500,000 American soldiers being sent to Vietnam. It’s unfortunate that one of the first casualties in war is the truth.”

Nine years later, in an interview with Al-Jazeera on September 10, 2010, Minister Farrakhan said:

“September 11th was very, very strange: 19 Muslims were put before the American public and the world two days after this heinous attack. Qur’ans were found. But before this, the Neo-Cons that were surrounding President Bush, who were the architects of something called a ‘Project For The New American Century,’ said that America needed something like ‘Pearl Harbor’—9/11 was America’s new Pearl Harbor—to summon the American people in their anger and horror over what happened. Now there are too many strange things that we question.”

Questions and answers will be delivered at Saviours’ Day 2017 during “The War on Islam: 9/11 Revisited, Uncovered & Exposed” plenary session, Saturday, February 18, 10 a.m. EST at the Cobo Convention Center, located at 1 Washington Blvd. in Detroit.

This program will be Live Streamed @ https://www.noi.org/the-war-on-islam-911-revisited/ 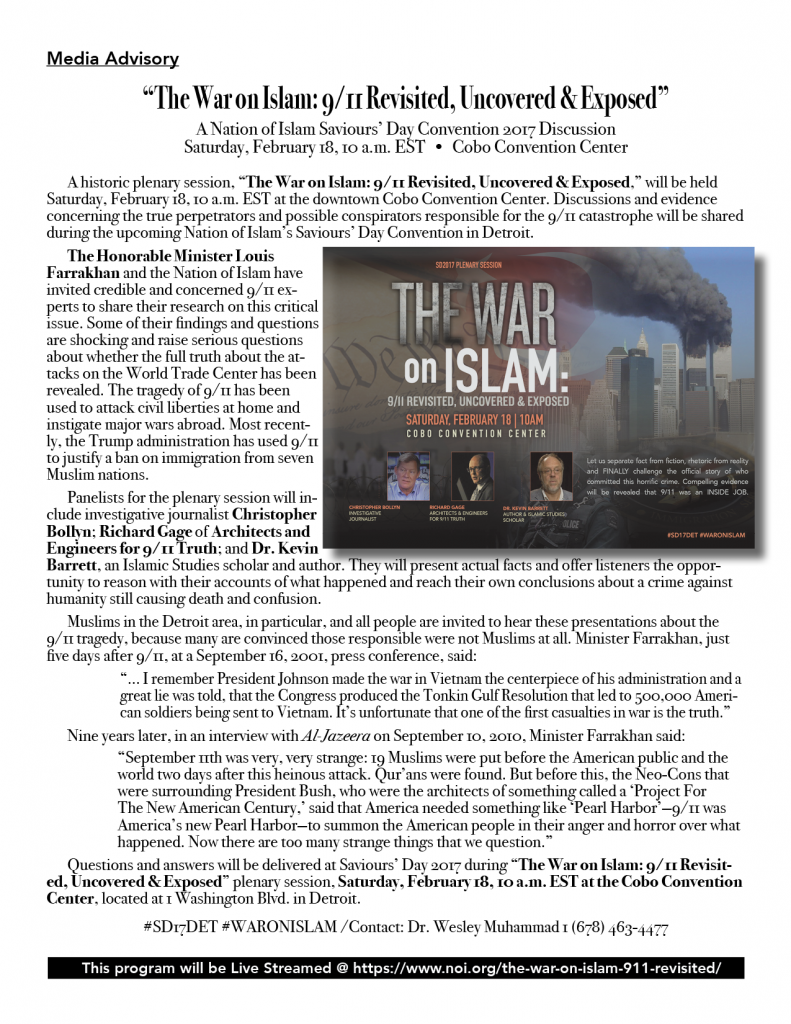