The TRUTH of 9/11 is that there is ample evidence to prove that so-called “Muslim terrorists” DID NOT DO 9/11. More than 2,700 Architects & Engineers are standing up to say that America and the world have been lied to. The question is, BY WHOM and WHY?
https://www.noi.org/the-war-on-islam-911-revisited/ 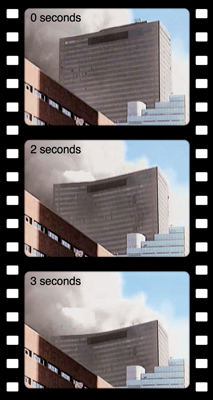 WTC Building 7 implodes at free-fall acceleration for 8 stories of its 6.5- second fall, baffling architects and engineers around the world who try to make sense out of the official “collapse by fire” explanation.

Seven hours after the explosive destruction of the World Trade Center Twin Towers, a third high-rise building was demolished. It was not hit by an airplane. The characteristic signs of controlled demolition were everywhere.

Although it received little media attention at the time, the third-worst structural building failure in modern history occurred on September 11, 2001. World Trade Center (WTC) Building 7 was a 47-story, steel-framed, fire-protected, high-rise office building located about a football field’s length from the WTC North Tower. Unlike the Twin Towers, WTC 7 was not hit by an aircraft, yet it fell to the ground suddenly, displaying the classic signatures of explosive controlled demolition.

The explosive evidence was ignored, mishandled, and/or covered up by the National Institute of Standards and Technology (NIST), the federal agency tasked with explaining its unprecedented destruction. 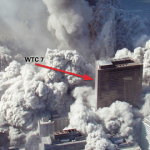 Although Building 7 was never hit by an airplane and had only isolated pockets of fires on about 10 floors, it suddenly imploded – coming down neatly, symmetrically, and completely at 5:20 p.m. The official story, according to NIST, is that WTC 7 collapsed due to normal office fires which created a “new phenomenon” in high-rise fires: destruction due to thermal expansion of steel beams, leading to the “progressive collapse” of about nine floors. This ultimately caused the failure of column #79 – which was followed within seconds by all the rest.

NIST originally theorized that stores of diesel fuel inside the building produced exceptionally intense fires leading to the unusual collapse. However, they later withdrew this speculation after an AE911Truth member proved with photos that no fire could have been burning on the fifth floor, the site of the generators and their fuel. NIST also ultimately concluded that the impact of debris from the North Tower was not a significant contributor to the collapse, although they suggested that it did start the fires. What NIST’s top engineers failed to explain in their 2008 Final Report – and often even to acknowledge – were the many features of the building’s destruction that are seen only in explosive controlled demolitions.

After an embarrassing series of questions from AE911Truth petition signers, NIST’s top engineers ultimately acknowledged some of the key facts surrounding the building’s destruction such as its free-fall collapse. However, NIST still refuses to seriously examine the hypothesis of explosive demolition, even though demolition is the only cause that has ever produced such structural failure. In fact, WTC 7’s failure was visually indistinguishable from a classic controlled implosion.

As documented by video footage, Building 7 collapsed at free-fall acceleration for a third of its 7-second collapse. NIST initially denied Building 7’s free-fall in its Draft Report released earlier in August of 2008. In the technical briefing that followed, NIST’s lead investigator, Dr. Shyam Sunder, accurately explained, “A free-fall time would be an object that has no structural components below it.” However he inaccurately claimed that WTC 7 took 40 percent longer than “free-fall time” to collapse, “and that is not at all unusual because there was structural resistance that was provided in this particular case. And you had a sequence of structural failures that had to take place, and everything was not instantaneous.”

However, physics instructor David Chandler had used the existing network television videos to carefully measure and document the acceleration of the building during its fall. His published analysis had shown conclusively that its free-fall was an indisputable fact. He publicly challenged NIST’s claims at the technical briefing. Along with several others, he filed formal requests for corrections during the public-response period.

Having been cornered, NIST reversed its initial denial of free-fall in its Final Report. However, it couched its revised position in deceptive language, and failed to explain how free-fall could be compatible with its fire-induced progressive-collapse theory. For the observed straight-down collapse to happen, an immense network of heavy steel columns and beams would have had to be forcibly removed and more than 400 structural-steel connections would have had to fail every second, evenly, consecutively all across each of at least eight floors. These failures had to occur ahead of the collapsing section – and could not be caused by it – because a free-falling object cannot exert force on anything in its path without slowing its own fall.

Yet NIST’s admission of the fact of free-fall, together with Sunder’s previous acknowledgment of the simple meaning of that fact, led to no reconsideration of its fire-induced, single-column-initiated, progressive-collapse hypothesis. Moreover, in what looks like an attempt to bury the discussion, its change of stance on the question of free-fall was omitted from the list of changes accompanying its Final Report. 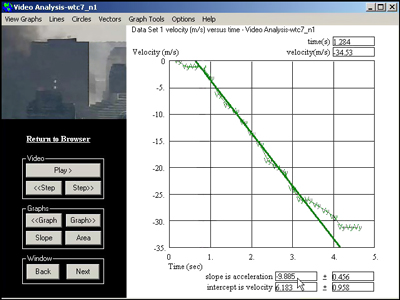 WTC 7: In freefall for eight stories. The graph shows the velocity increasing each second which is acceleration.

The overall building mass fell suddenly, uniformly, and practically symmetrical through what should have been the path of greatest resistance – some 40,000 tons of structural steel. According to structural engineer Kamal Obeid, PE, this requires a precisely-timed, patterned removal of critical steel columns – which office fires, a gradual chaotic, organic process, simply cannot achieve.

Only a carefully engineered series of explosives (or incendiaries) could cause a steel-framed skyscraper to collapse in on itself – and fall into its own footprint. After all, demolition companies are paid large sums to accomplish this extremely difficult feat, and only a few can do it with tall buildings. Also, the destruction was complete. This building had been built especially strong so that alternate floors could have been removed in case a tenant needed a two- or even three-story open space. Yet, its forty-seven stories collapsed, in fewer than seven seconds, to about four stories of debris – having fallen like a house of cards – with the almost complete dismemberment of both the braced frame and welded moment-resisting (bend-resistant) steel frame. Again, this is something fire could not have, and has never, achieved.

NIST officials have not provided even a superficially coherent explanation of the collapse. Nor have they taken all of the relevant evidence into account. What then is the missing evidence?

Prior to the NIST investigation, the Federal Emergency Management Agency (FEMA), had conducted a preliminary, cursory, underfunded investigation – yet produced a Building Performance Assessment Report in May of 2002. In Appendix C of that report, FEMA described its analysis of the only likely surviving piece of steel from Building 7. The analysis showed “evidence of a severe high temperature corrosion attack on the steel, including rapid oxidation and sulfidation with subsequent intergranular melting….”

“A liquid eutectic mixture containing primarily iron, oxygen, and sulfur formed during this hot corrosion attack on the steel.”… “No clear explanation for the source of the sulfur has been identified.” The New York Times called this “perhaps the deepest mystery uncovered in the investigation.” What did NIST say in its Final Report about this mystery described by FEMA? Nothing – there was no mention of this crucial evidence at all. It was excluded from the Final Report after NIST took over the investigation.

Neither jet fuel nor office fires can reach anywhere close to the melting point of steel, much less its evaporation point – yet, according to Jonathan Barnett, FPE and author of the FEMA Report, “The ends of the steel beams had been partly evaporated.” So what could have caused this “high temperature corrosion attack?”

Thermite is a mixture of powdered iron oxide and elemental aluminum which, when ignited, reacts violently at 4,000-4,500° Fahrenheit (F) – well above the melting point of steel or iron, about 2,800° F, producing aluminum oxide gas and molten iron. When sulfur is added to the mixture, the iron melts at a lower temperature. Thermite with sulfur added is called thermate. Contrary to NIST’s failed attempt to explain away the presence of sulfur in its FAQ, the sulfur could not have come from gypsum wallboard where it is an inert, chemically “locked,” ingredient. Besides, gypsum is used to protect steel framing and has never turned around to attack it, ever.

The United States Geological Survey (USGS) used NASA thermal imaging of the WTC 7 rubble pile surface to document hot spots with extreme temperatures of almost 1,400° F. These temperatures are hotter than most office fires produce, yet there were no fires on the surface of the pile following the collapses. The detected surface temperatures indicate much higher temperatures deeper within the pile. These extreme temperatures persisted for several weeks, despite the continuous spraying of of water onto the debris pile – so much water that one worker described the result as “a giant lake.” Thermite contains its own source of oxygen and burns just as well under water.

The collapse of WTC Building 7 is the third worst structural failure in modern history. The official story contends that fires weakened the structures, resulting in a gravitational collapse. The evidence, obvious to so many researchers but omitted from NIST’s Final Report, supports a very different conclusion – one that points squarely to explosive controlled demolition.

If WTC 7 was intentionally brought down, then clearly it becomes a ‘smoking gun’ that must be investigated. Who were the terrorists that had access to this highly secure building, occupied in part by the CIA, FBI, Dept. of Defense, IRS, SEC, and others, and the technology required to prepare it for demolition? The 2,800-strong Architects & Engineers for 9/11 Truth present the scientific forensic data, evidence, and eyewitness and video testimony. We do not speculate as to who might have been responsible or how they have, so far, gotten away with the crime of the century.

The destruction of the Twin Towers must be re-evaluated as well in light of the WTC 7 evidence. We therefore call for an unimpeachable investigation with subpoena power into the destruction of all three WTC skyscrapers. We ask you to do your part as a citizen to join us in making it happen. Visit Architects-Engineers.org to learn more about WTC 7 in just 15 minutes. Visit AE911Truth.org to investigate the explosive evidence of the Twin Towers and to sign the petition calling for a new WTC investigation.