For the past month, Women’s March Co-organizer Tamika Mallory has faced relentless criticism for doing what millions and millions of African-Americans have done for decades and generations of their lives: she attended a speech by Nation of Islam leader Minister Louis Farrakhan.

While speaking, Minister Farrakhan made remarks which have been criticized for being anti-Semitic by the Anti-Defamation League (ADL).  When asked about these statements, Ms. Mallory stated: “I think people have to ask Minister Farrakhan about his views. I’m not responsible for Minister Farrakhan, nor am I a spokesperson for him.” [1]

She continued by stating, “What I do know is that I’ve worked with Minister Farrakhan for many years to address some of the ills in the Black community, where we’ve transformed lives… In those areas we have been able to work together. As it relates to some of the statements he has made and some of his personal views, people have to ask him about that.” [2]

Organizations such as the ADL refused to accept this and took to Twitter and other social media to criticize not only Ms. Mallory but other Black leaders who would dare share the same breathing space as Minister Farrakhan.

The ADL has further called for Ms. Mallory to resign from her position in the Women’s March. The ADL complains, ”Tamika Mallory, one of the leaders of the Women’s March, who got a special shout-out from Farrakhan and who regularly posts laudatory pictures of him on her Instagram account — as does Carmen Perez, another leader of the March.“ [3] After signing a defense agreement with apartheid South Africa in 1975, Peres proudly posed in a photograph with Hendrik Van Den Berg, who was known as the most feared man in South Africa due to his role in mass-murdering Black, anti-apartheid activists. [5]

Why didn’t the ADL attack Peres with as much tenacity for taking a photo with Hendrik van den Bergh, as they did Ms. Mallory for uploading a photograph with Farrakhan?

Despite Peres appearing in a photo with a mass-murderer of Black people and his role in arming apartheid South Africa, the ADL once hosted a celebration where they provided Peres with the distinguished statesmen award, claiming Peres changed the world for the better. [6]

Foxman asserted, “Just think of the diverse contributions Shimon Peres has made to mankind.” [7] It would appear the ADL does not hold itself to the same standard it seeks to impose upon Ms. Mallory.  Foxman has also  shared platforms and taken photographs with former Israeli prime minister Ariel Sharon, who believed that the racist white settlers in apartheid South Africa needed,”more modern weapons.” [8]  Was there any outcry about this appearance? No.

In the Unspoken Alliance: Israel’s Secret Relationship with Apartheid South Africa, Sasha Polakow-Suransky writes: “As the anti-apartheid campaign turned its attention to Israeli links with South Africa, the ADL entered the propaganda fray, publically attacking Nelson Mandela’s ANC with arguments that mirrored those of hardline security officials in Pretoria.” [9]  Indeed, instead of repudiating Peres for signing a defense agreement with Apartheid South Africa, in 1986, the then national director of the ADL, Nathan Perlmutter, co-authored an article defending apartheid and South Africa’s President P.W. Botha, while denouncing Nelson Mandela’s African National Congress as “totalitarian, anti-humane, anti-democratic, anti-Israel and anti-American.” [10]  If the ADL had been aware of Nelson Mandela’s photograph with Minister Farrakhan, given their history, the ADL would have probably used that to call for Nelson Mandela to step down from his position. 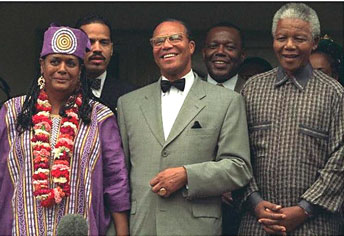 The ADL even dispatched spies throughout the United States to monitor groups working to end apartheid in South Africa. [11] Working as a spy for the ADL, Roy Bullock passed on data he collected on anti-apartheid activists to the racist intelligence agency of Apartheid South Africa. [12]

After this repugnant history, it’s absolutely absurd for the ADL to even posture as though it’s a credible civil rights organization when they have not  made any acknowledgment or amends with Black communities for their decision to support white murderous rule in apartheid South Africa.

The Israeli Defense Force vs the Nation of Islam

Whilst criticizing Ms. Mallory for associating with the NOI, the ADL in events such as “National Counter-Terrorism Seminar in Israel” [13] demonstrates it is more than willing to associate and even promote the Israeli defense force, an  organization that has a demonstrated track record of actual physical violence against Black people.

A 1984 U.N. report titled “Recent developments concerning relations between Israel and South Africa” states that the Israeli defense force’s “Collaboration with bantustans in military and police affairs is alarming because the racist regime of South Africa has utilized the bantustans as tools of oppression and suppression against the people of South Africa.” [14]

The Bantustans were systematically designed to confine the socio-economic mobility of Black people and ensure that Black people remained a permanent underclass and cheap labor source for white people. By any objective standard, the Israeli “defense”  force should be classified as a hate group for policing the bantustans of apartheid South Africa.

The ADL is upset that Ms. Mallory attended a Nation of Islam event, an organization whose members are forbidden to carry weapons—even a pen knife. In contrast, Peres provided apartheid South Africa with brutal weapons used to kill Black people.

The Nation of Islam is currently characterized by the ADL as a “hate group,” despite a lack of history of actual hate crimes. In contrast, the Israeli defense force, whom the ADL is affiliated with, has a documented and undeniable history of facilitating state terrorism against Black people.

During the height of the struggle against apartheid in South Africa, Lekgau Mathabane, the head of Soweto’s Committee of Ten, an anti-apartheid civil rights organization, proclaimed: “A friend of the South Africa government cannot be a friend of the Black…. Israel also supplies arms to South Africa and South Africa uses those arms for killing Black people and even children three years old. You don’t  expect any Black person to be happy with that type of thing.” [16]

Why is it acceptable for Foxman to snap photos with Peres but a Ms. Mallory instagram post with Minister Farrakhan results in a national uproar? Given the anti-Black violence of the Israeli military, the ADL’s decision to promote the Israeli defense force is far worse and worthy of condemnation than Ms. Mallory’s decision to attend a Nation of Islam event.

Anti-racist activist Tim Wise stated, “Perhaps when white folks begin to show as much concern for the bigoted statements and, more to the point, murderous actions of white political leaders as we show over the statements of Louis Farrakhan, then we’ll deserve to be taken seriously in this thing we call a ‘national dialogue on race’.” [17]

When Will the ADL condemn the Anti-Black Zionists?

Another immense double standard was revealed when Chief Rabbi of Israel Yitzhak Yosef referred to Black people as “Monkeys.” [18]  The characterization of Black people as monkeys is no light matter; it is rooted in Black people being portrayed as subhuman, and it is the very ideology that rationalized colonialism and the enslavement of Black people.

Yet the most the ADL did was issue a watered-down tweet claiming it was “racially charged,” as opposed to explicitly anti-Black. [19]  There were no calls for any particular individuals who were in the audience who attended the speech to resign from their places of employment. Moreover, the ADL has devoted a significantly larger amount of tweets indicting Minister Farrakhan, compared to one watered-down version condemnation of Rabbi Yitzhak. There was not even a call or pressure by the ADL to have Rabbi Yitzhak step down from his position as chief rabbi of Israel. 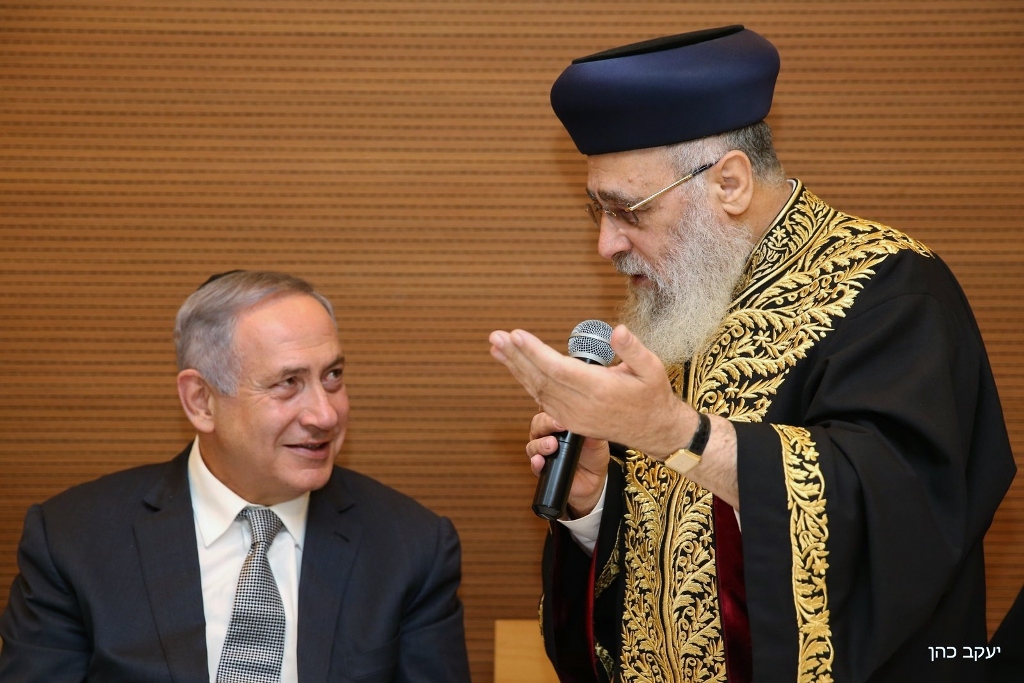 Israeli Prime Minister Netanyahu with the Chief Rabbi of Israel who has called Black people ”monkeys.” When will the ADL pressure Netanyahu to resign for his association with a racist?

While Zionist Lobby groups have called for Senator Maxine Waters to resign for a video showing her warmly embracing Minister Farrakhan, there have been no calls for Netanyahu to step down as Israeli prime minister for photographs showing him shaking hands with the anti-Black rabbi, Yitzhak Yosef.

The reality of the Anti-Black Zionists

The anti-Black zionist groups such as the ADL place the state of Israel over Black lives. Given the ADL’s role in supporting apartheid in South Africa [20], it is not to be taken seriously as a civil rights organization. The ADL has no authority to tell Ms. Mallory or any other Black leader who they can associate with.  Instead of focusing on her decision to attend a speech by Minister Farrakhan and stalking her social media for Minister Farrakhan photos, the ADL should be seeking forgiveness and atonement from the Black community for their complicity in being anti-Black.

[The NOI Research Group thanks Brother Hakeem Muhammad for permission to publish this article. The original is posted here: https://muhammadhakeem.wordpress.com/2018/03/29/tamika-mallory-the-adl-the-hypocrisy-of-the-anti-black-zionists/]