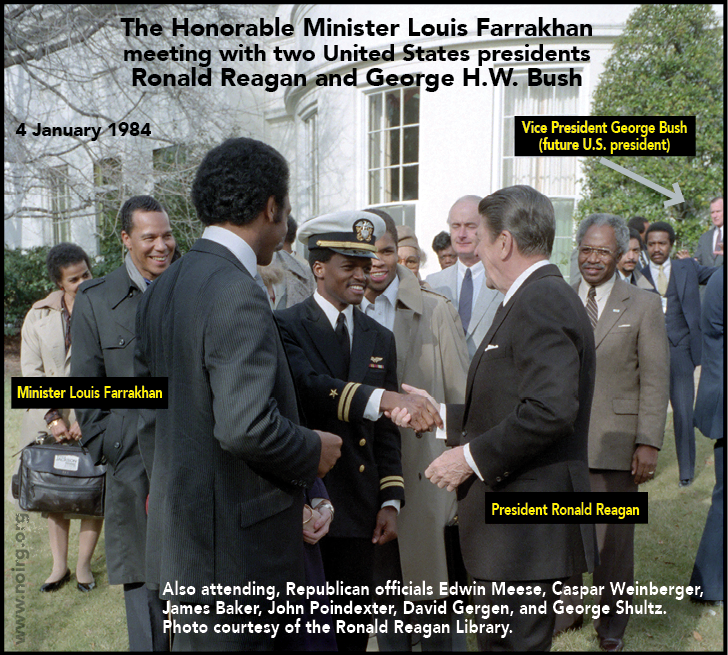 In 2018, the Jewish leadership stepped up their racist campaign to destroy the reputations of Black leaders who no longer accept the political manipulations of Jewish money. It started many years ago, but the latest incarnation began with the recent publication of a 2005 photograph taken by journalist Askia Muhammad showing Senator Barack Obama happily posing for a photo with The Honorable Minister Louis Farrakhan. Arrogant and overreaching, Jews demanded to know why they hadn’t been told of the photo, suggesting that knowledge of it would have changed the course of American history and even doomed the chance to elect Obama as the first Black president. 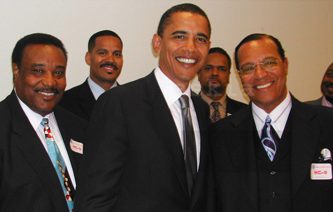 Soon Jews feigning outrage demanded lists of ALL shvartses (Jewish term for “niggers”) who had EVER had photos taken with The Honorable Minister. Rep. Keith Ellison was thought to have been in a room with him and he was pilloried. Members of the Congressional Black Caucus were photographed hugging Black America’s most respected and admired leader, and ALL 21 of them were publicly whipped, their names plastered all over the Jewish-controlled media. It began to look like one of the many Jewish slave-auction advertisements that were so common when they dominated the slave trade for 400 years[1]. (See, for example, Rabbi Levin selling “22 Likely Negroes at Auction.”)

So Jewish leaders, in their utter madness, have established an absurd criterion they demand Blacks comply with: ANYBODY who has been in a room with The Honorable Minister Louis Farrakhan MUST be condemned, disgraced, and lose their jobs. And it escapes no one’s notice that ALL of their targets are Black—none are white. Driving the Jewish onslaught are such con artists as “lawyer” Alan Dershowitz, the ADL’s spymaster[2] Jonathan Greenblatt, political hack Ari Fleischer, and news actor Jake Tapper. How unsurprising that all of their megaphones fell silent at the exposure of a photo that Jews have been keeping secret for more than 20 years! The photograph shows The Honorable Minister Louis Farrakhan as a guest at the White House in Washington, DC, at the invitation of the father of the modern REPUBLICAN PARTY, President Ronald Wilson Reagan! 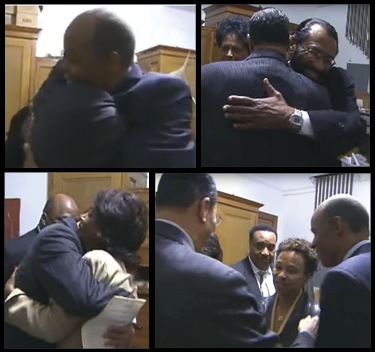 Several photographs were taken of the January 4, 1984, event, which was a celebration of the release of navy pilot Lt. Robert Goodman, a Black man who had been shot down flying a bombing mission over Syria. The Rev. Jesse Jackson, while in the midst of his historic campaign for the presidency, brought a delegation with him to Syria to appeal to President Hafez Al-Assad to release the pilot on humanitarian grounds. And several of those in that delegation attested to The Minister’s “significant and vital role” in freeing the prisoner of war. Chicago attorney Thomas N. Todd said that Minister Farrakhan was a “substantial part of the success” of Mr. Jackson’s Syria mission.[3]

So Farrakhan was not simply at the White House as some bystander: he had actually carried out American foreign policy where the United States government had failed its own captured officer.

Now, back to the Jews, who played no role in saving our brother’s life, but an immense role in attacking both Jackson and Farrakhan: Their list of damnable “anti-Semites” who have met with Farrakhan has now been substantially whitened, and now includes two “anti-Semitic” presidents!

Edwin Meese, Counselor to the President

All of those white men met and shook hands with, thanked, and congratulated The Honorable Minister Louis Farrakhan.

The Jewish language is clear and unconditional about such “Farrakhan photo felons” when they are Black. Greenblatt saw the Obama photo, and even though Obama, as senator, had previously “denounced the bigotry of Farrakhan,” the Jewish attack dog commanded that former President Obama “do so again.” The ADL’s top bigot said of Rep. Danny Davis, D-Ill., “It is unfortunate that the congressman apparently can’t muster up the courage to denounce Farrakhan…” Referring to Keith Ellison’s meeting with Farrakhan, David Bernstein, the president of the Jewish Council for Public Affairs, said on Twitter, “It’s very disturbing….Dining with hatemongers is not ok.” The ridiculous Alan Dershowitz blathered that that Obama–Farrakhan photo was “a really horrible truth,” and former White House press secretary Ari Fleischer tweeted what amounted to a 21st-century runaway slave advertisement: “Here are 21 members of Congress today who belonged to the CDC in 2005. Why not ask them if meeting with anti-Semites is ok?” 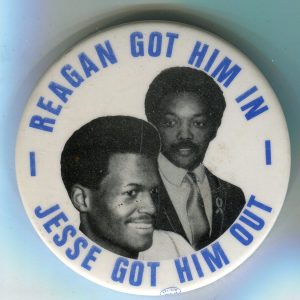 Certainly, the publication of this photo of the Reagan–Farrakhan Rose Garden festivities has proved that two white presidents have crossed that Jewish line. Former President Bush is still alive and—just like former President Obama—must answer for his “anti-Semitism.” Who will get to him first—Greenblatt, Dershowitz, Bernstein, or Fleischer?

The answer, of course, is that all these Jewish hypocrites will prove for the millionth time that the Jewish leadership are some of America’s most accomplished racists. They and we know that the charge of “anti-Semitism” is nothing more than a historical hatchet to “justify” their true racist aims. They have avoided supporting real liberation movements by inventing “anti-Semitism” where none exists and then creating a fake outrage around that false charge. They are a one-trick pony and the tactic as an effective bludgeon against their enemies has run its course. In The Secret Relationship Between Blacks and Jews, Vol. 2, Jewish scholar Marc Dollinger explains why Jewish leaders chose to use this tactic against the Nation of Islam:

“Despite the Nation of Islam’s political marginalization, [Jews] still feared [Elijah] Muhammad. His charismatic personality, willingness to confront racism in the most dramatic rhetorical terms and ability to inspire even non-believing African American listeners concerned Jewish leaders. The Nation of Islam leader, they feared, could earn the respect of his black audiences, even if they chose not to join his movement.”

Amazingly, Dollinger does not claim that Mr. Muhammad or the NOI evidenced any form of “anti-Semitism”—he says that the Jewish leaders “feared” the Hon. Elijah Muhammad’s “willingness to confront racism”! Jewish organizations, then, worked tirelessly against the NOI— an organization they knew was not anti-Jewish—to STOP THE BLACK MUSLIMS FROM CONFRONTING RACISM! And this destructive, anti-Black policy—described by Dollinger—is how Jews in America have thoroughly earned the title “Synagogue of Satan.”

Your Jewish “friends” Greenblatt, Dershowitz, Bernstein, and Fleischer will run like Ussain Bolt to hide from that ugly truth. It is time for Blacks to finally free themselves from this historical deception and these incorrigible deceivers, lest we fall for their tricks yet again. 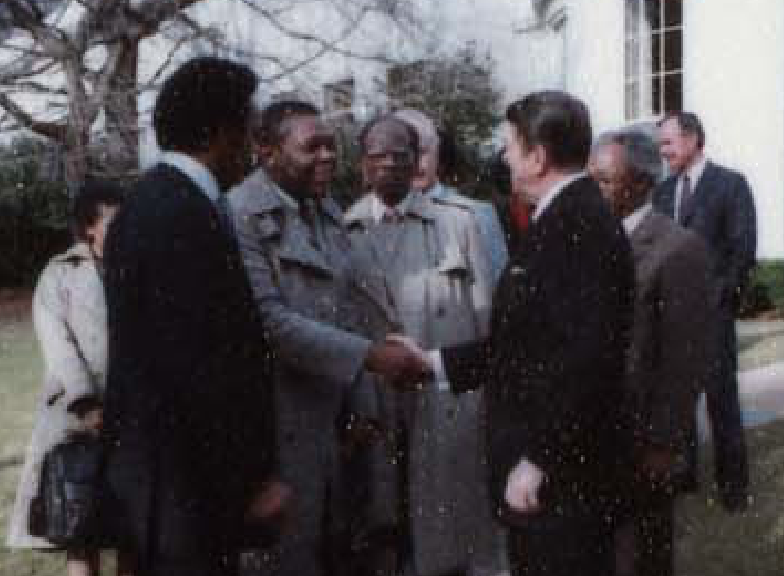 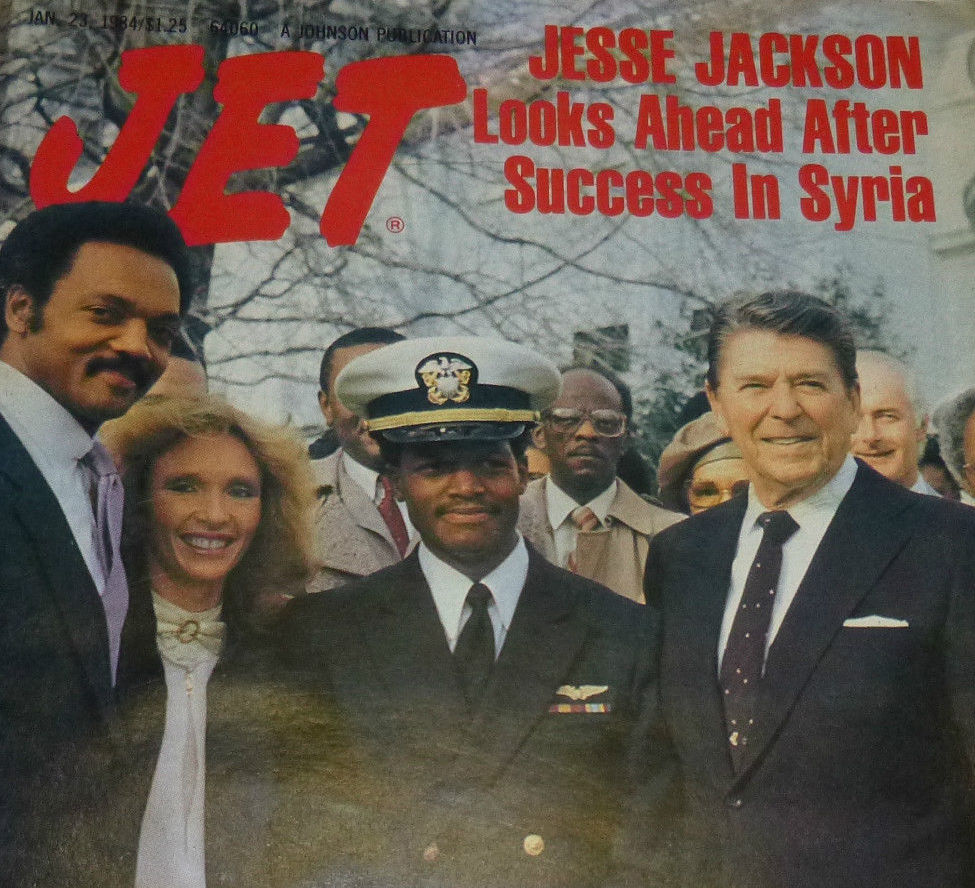