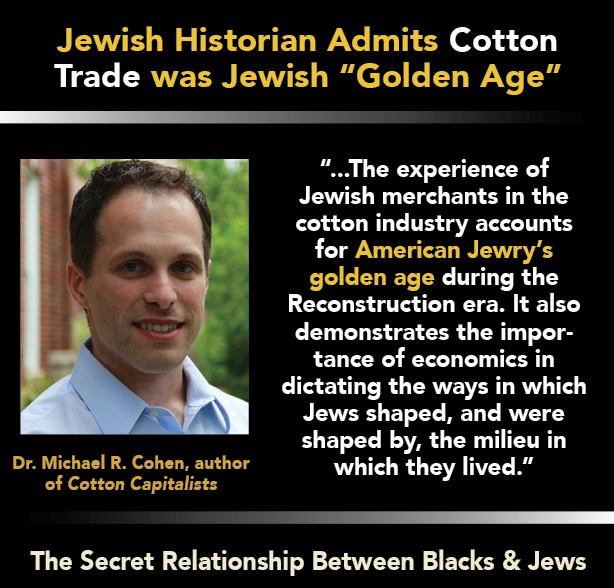 On February 26, 2019, Amazon.com banned The Secret Relationship Between Blacks & Jews and removed the entire book series from its pages. The crime? The Nation of Islam scholars documented the role of Jewish merchants in the cotton trade in the American South. Now comes a Jewish scholar Dr. Michael R. Cohen to confirm and expand upon that core theme with a new book titled Cotton Capitalists: American Jewish Entrepreneurship in the Reconstruction Era (New York: New York Univ. Press, 2017). He wrote that

“Jews clustered in the cotton industry, and as a staggering number of Jews operated dry goods and general stores, Jews became deeply enmeshed in the nation’s—and perhaps the world’s—most important industry.”

Jews are now ready to admit their control over cotton, even claiming that Jewish cotton merchants were the “life blood of the Southern economy.” The role of Jews in cotton is so significant that The Honorable Minister Louis Farrakhan  lectured powerfully on the subject in 2010:

Even in reviewing Cohen’s book Jewish scholars are now regurgitating the Nation of Islam thesis published a decade ago. Keep in mind that just a few minutes ago Jews were denying they had any presence in the South at all, where slavery and Jim Crow forced millions of Black onto the very cotton plantations now credited with being the foundation of Jewish wealth:

Here are a few short excerpts from Cotton Capitalists: American Jewish Entrepreneurship in the Reconstruction Era:

“Jewish merchants cultivated an economic niche in the Reconstruction-era cotton economy that catapulted them into the forefront of the American economy and global capitalism. With conditions ripe for success, they drew upon ethnic networks of trust that enabled their businesses to survive during market downturns by ensuring access to credit. Jews clustered in the cotton industry, and as a staggering number of Jews operated dry goods and general stores, Jews became deeply enmeshed in the nation’s—and perhaps the world’s—most important industry.

“That immersion proved significant. Jewish success in the cotton trade fostered a golden era for Southern Jews during the roughly two decades following the Civil War. It redrew the American Jewish map, as scores of Jewish merchants settled in market towns located in regions of high cotton production and marketing. Jews also concentrated in towns that sat along river or rail lines offering easy transportation access for cotton shipments. The internal dynamics of Jewish communities also changed significantly, as Jews transitioned from a wandering, peddling-based lifestyle to one that featured more stable Jewish communities with burial grounds, synagogues, and social organizations. Success in the cotton trade redefined the terms of Jewish integration in the cities and towns in which Jews lived, and Jews reshaped the growth and development of the towns themselves.“ 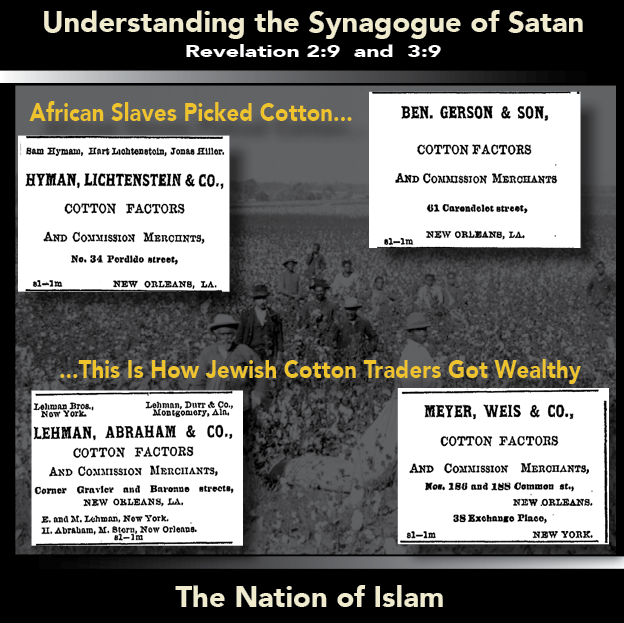 “All of these factors meant that on the eve of the Civil War, Jews stood fortuitously positioned in an economic sector poised to shape global capitalism.”

“Smuggling and blockade-running became particularly lucrative, and a dearth of goods in the South made clandestine trade all the more attractive; profit margins proved immense at both ends of the transaction. The demand for goods also made legal trade within the South extraordinarily lucrative.”

“As the factorage system collapsed, interior general and dry goods stores, which Jews had begun to operate in the antebellum years, filled the void and became the economy’s lifeblood. Additionally, emancipation provided a new potential customer base. It made good business sense for Jews to welcome freedmen as customers, and that is what they did.”

“If structural factors created the necessary conditions for Jewish merchants to function within Southern capitalism, Jewish merchants still could not have actually succeeded in the absence of ethnic networks. Networks supplied the trust upon which economic transactions relied. …. This trust was cultivated laregly through ties of family, kinship, or ethnicity that operated within businesses and between businesses. Shared ethnicity fostered the networks of trust that provided Jews with credit, and this provided them with a clear competitive advantage.” 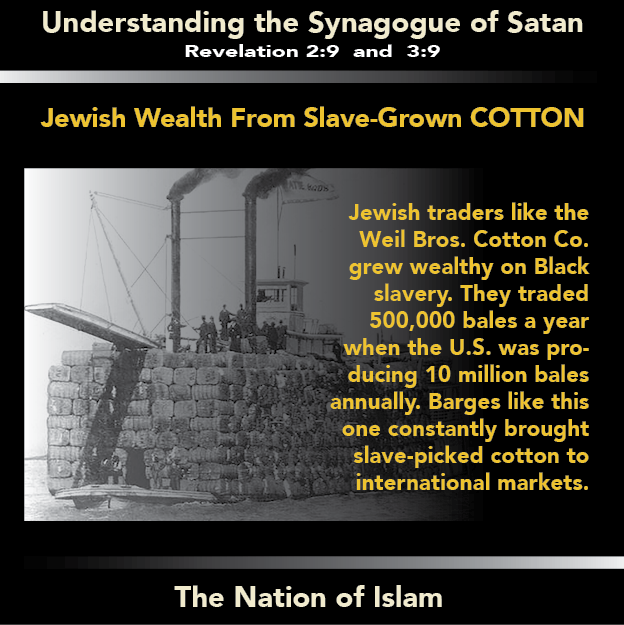 “Once Lehman Brothers acquired this global investment, they would send that investment to the South—again through relationships of trust that were often predicated on ethnicity.”

The NEW 37-page “Highlights and Key Points of The Secret Relationship Between Blacks & Jews” can be downloaded FREE here.