Life in the Valley of the Shadow of Racial Profiling and the White Supremacist Mindset in Ferguson and the Surrounding St. Louis Municipalities

The killing of Michael Brown by a police officer is causing the youth around the Nation to rise up and demand that their rights be respected. The protest arising out of St. Louis, where anger is seen particularly in the faces of black youth, is rooted in a history of racial oppression in the St. Louis area, which comprises over 90 municipalities that include not only Ferguson, but areas such as Hazelwood, Florissant, University City, St. Louis City, City of Bel Ridge, Clayton, Kirkwood and more. In the St. Louis Metropolitan area the experience for many Blacks is one where they are systematically and disproportionately stopped, ticketed, arrested, and brutalized by police.

A mindset of white supremacy and racial domination can be seen early in Missouri history. The 1857 Dred Scott decision denied Mr. Scott his right to freedom after he had been legally free. This case was decided in the Federal Court in downtown St. Louis and reflects a pattern of injustice that Black people in the city still experience today. When speaking about his belief of the inferiority of black people, Justice Taney in the Dred Scott decision stated, “they had no rights which the white man was bound to respect; and that the negro might justly and lawfully be reduced to slavery for his benefit.”

Black people in the St. Louis Metro, including those living in Ferguson, Mo., have been the victims of an intricate traffic ticket scheme in which being Black is the factor that gets you stopped and targeted by police. Blacks are subjected to intense racial profiling by overreaching and abusive police, resulting in excessive police stops, ticketing and harassment. According to statistics from the Missouri Attorney General, black drivers were 66 percent more likely than white ones to be stopped in Missouri based on their proportionate share of the driving-age population last year. Statistics further state that 86% of people over the age of 16 who are stopped in Ferguson are Black while Blacks make up only 63% of the Ferguson population, which totals about 21,000 people. And there is a pattern of police stopping of Black people all throughout the St. Louis area, where police harassment has become a common way of life.

Some of the common complaints from Black drivers include:

Stories are commonly told of uncles and grandfathers who as young men were stopped everyday by the police as they drove to their jobs. In these cases it would only be the intervention of the white business owners they worked for which caused the police harassment to cease. Drivers after experiencing these tactics express terror, frustration, and anger.

Black people are also overrepresented when it comes to ticketing, arrests, issuance of fines and incarceration for ordinance violations.  According to the 2013 report by the Missouri Attorney General, there were 5,432 citations issued in Ferguson in the year 2013—4,676 of those were issued to Blacks. In the St. Louis Metro area it is hard for Black people to drive across the over 90 municipalities without getting a ticket. It can sometimes feel like walking a tight rope a thousand feet up for Black youth, who are easy prey, often profiled, stopped, ticketed and many times arrested for “failure to pay old tickets.” This harassment is reminiscent of the system of convict leasing, where manufactured charges and petty offenses are used to justify the collection of high fines. These huge fines and difficult probations constitute cruel and unusual punishment. Some of the outrageous examples of excessive tickets and fines are described below:

The fines assessed in many cases can be as impossible to pay as the poll taxes of the Black Codes. A person’s court date many times requires them to stand in long lines for 3 to 4 hours to pay fines or plead the case. These high fines feed the economy with the hard-earned money of Blacks. According to the Arch City Defenders, 21% of the Ferguson’s general fund revenue in 2013 was from ticketing, collecting $2.63 million and 24,532 arrests warrants. 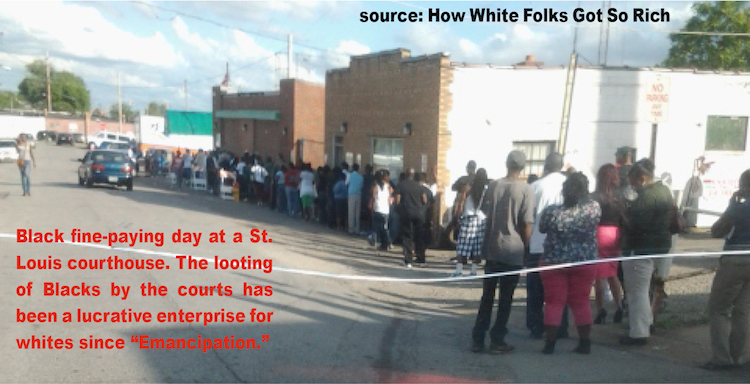 The practices of police harassing, stopping and ticketing are practiced more often in municipalities where Black residents earn lower income per capita than municipalities where higher-income whites reside. Poor Blacks often fail to pay, and thus walk around with warrants and are considered fugitives. In some instances youth have many warrants for these nonviolent offenses. I, as a practicing attorney, have seen cases where youth in some municipalities have in excess of 20 warrants.

Average fines can range from $100.00 and up. Failing to pay these fines, our frustrated youth may begin to feel like the rebels they have been portrayed as. An arrest can result in being picked up and transported from one jail to another in each municipality, where money is demanded in order to be released. Jobs can be lost while the process unfolds. No credit is given for time served, so it is no different from a debtor’s prison. I even witnessed an older woman being subjected to serial ticketing for allegedly failing to control her weeds.

Incidents of police domination, intimidation, and use of excessive and deadly force, as seen in the killing of Michael Brown, are also well known across the area:

Cities like Ferguson, Missouri, are a microcosm of the macrocosm, says the Honorable Minister Louis Farrakhan. I believe the neglect of youth has allowed an enemy to shape them by poor education and ready access to drugs and other vices. As a lawyer, these factors have made it possible for the white justice system to oppress Black youth with tactics similar to the Black Codes, with the results being excessive fines and onerous conditions of probation.

St. Louis is a city where many of today’s youth have not been taught the truth of Black history in America and do not know why they are disproportionately treated as a despised race in America. The youth see the false perception that has been created in America and promoted through negative stereotypes that attempt to label them as unintelligent, violent, criminal, poor, lazy, and disrespectful.

Anger has been building in this St. Louis area for a long time because of mistreatment and abuse. The strong response shown by the youth is an exercise of their desire for Freedom. The knowledge that they are not alone gives them hope. Unity is on the uprise. Let’s teach the youth the History!

(Pamela Muhammad is a practicing attorney.)