The Honorable Minister Louis Farrakhan has been to Baltimore with the Message of The Most Honorable Elijah Muhammad so many times the city really ought to be renamed Farrakhan. Well, in time. Forty years ago this very month the Minister spoke to 30,000 at the 1974 Family Day celebration around the themes of self-help and self-development. Speaking directly to the men, he reminded them that we are not men “until we learn how to love, respect, and protect our Black woman.”

In 2004, Minister Farrakhan returned to speak of the leadership dynamic between our great historical leaders such as W.E.B. DuBois, Marcus Garvey, and Booker T. Washington and how the synthesis of their ideas can “bring these disparate groups into one mighty force that creates movement that cannot be stopped…” He spoke of what he himself witnessed: “During the ’60s, there was an idea that united us, when we stopped using the term ‘Negro’ and began to see ourselves as Black people.” He explained that “Martin Luther King Jr. was an evolving giant, but to reduce his revolutionary development to ‘I have a dream’ is to kill the idea that was ingrained in him and that he kept evolving toward…”

Morgan State’s Student Government invited The Honorable Minister Louis Farrakhan to their Baltimore campus to give the keynote address at the 2nd Annual “Black United Summit International,” a gathering of the future leaders of all the HBCUs (Historically Black Colleges and Universities). The themes they chose for their Unity conference demonstrate a strength of purpose and acknowledged the very serious historical moment we all are currently facing: “Re-Claim, Re-Pair, Re-Form, Re-Produce, Reparations Now!”

Those themes are tailor-made for Minister Farrakhan, a man whose history of leadership has plumbed the depths of all these ideas and synthesized them into a powerful programmatic vision.

But The Minister also warns us that any attempt at unity among an oppressed people inevitably draws the ire and interference of the oppressor. MINISTER FARRAKHAN tweeted a profound message:

“Are you sure that you want to organize effectively to change your reality? If you are sure, then you should be ready for severe opposition. Organizing is serious and there are those who do not want to see us unify.” (@LouisFarrakhan)

And no sooner had those words reached cyberspace than Baltimore’s Jewish leader Jay Bernstein attacked the students of Morgan State and their attempts to organize for their future. It is no coincidence that Bernstein launched his attack from the pages of the Baltimore Sun—the paper with a slaveship in its masthead. His claim that The Minister is “repugnant” to him and his fellow Jews was quickly embraced by the “Baltimore Jewish Life” website.

We’ve discussed The Minister’s history of guidance and support at Morgan State and in Baltimore, where Student Minister Carlos Muhammad and the Nation of Islam have been a long and enduring force for change in the heart of the Black community.

But let us examine what Baltimore’s Jewish leadership has offered to the cause of Black progress: 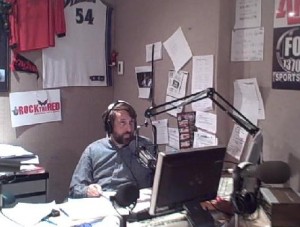 In Lincoln’s time, Rabbi Bernard Illowy was the leader of Baltimore’s Orthodox Hebrew Congregation. He declared his open sympathy for the Southern Confederates and their slave property rights. The Jewish newspaper of Baltimore, Der Deutsche Correspondent, defended slavery and exhorted its Jewish readers “never to forget that the Constitution of the United States…sanctions and protects the institution of slavery.”

In his book Zion In America Henry Feingold makes a remarkable observation about the Jews who PROFITED from the bloodiest war in U.S. history, the Civil War: “Some of the Baltimore Jews became big real estate men, bankers, railroad magnates, and manufacturers of ready-clothes, which grew tremendously as a result of Government orders for uniforms.” (Uniforms and clothes made with slave-picked cotton, of course)

When Baltimore’s Rabbi David Einhorn spoke for the equality of all men, he was thrown out of his own synagogue and forced to flee the city—not by a mob of anti-Semites but by his own Jewish congregation.

On the business side, literally hundreds of Jewish wholesalers operated from Baltimore, feeding the Southern plantation economy with goods, supplies, and credit. The notorious Rothschild banking family of Europe built their massive wealth from slave-picked cotton and tobacco, and their cotton dealer was based in Baltimore.

Most Jews fiercely opposed the Emancipation Proclamation, and when Jim Crow law replaced the slave codes, and sharecropping replaced slavery, Baltimore Jews were at the forefront in creating that Nazi-like system. Martin Luther King may have fought for voting rights in the 1960s, but back in the early 1900s the leaders of Baltimore’s Jewish community were the “most vocal champions” of eliminating the Black vote.

U.S. Senator from Maryland Isidor Rayner and Attorney General of Maryland Isaac Lobe Strauss gave rabidly hateful speeches in which they warned against “NEGRO DOMINATION” and demanded that white society be protected from “depraved negroes.” Rayner could have easily been a Ku Klux Klan leader: “The white race must prevail over barbarism, and this can best be achieved by reducing the Negro vote to the utmost minimum in Maryland.”

As the state’s attorney general Isaac Lobe Strauss drafted the anti-Black laws that became known as the Strauss Amendment. Even Baltimore’s Black newspaper, the Afro-American Ledger, editorialized that Strauss and Rayner “scarcely ever speak at a meeting that they do not have a word to say against the despised Negro. They out Herod Herod in stirring up race prejudice against the Negro.” The paper called Strauss “The Prosecuting Attorney of the Colored Race in Maryland,” and marveled at the racism he publicly displayed.

This is a history that has been purposely hidden from the Blacks of Baltimore. The reality is that America and its Jewish community built its prodigious economic wealth and political power by these very racist methods. They do not apologize for it, and they use this inordinate wealth to control the mouths and minds of those who desire to lead the Black masses out of a condition that Jay Bernstein’s Jewish people had a significant hand in creating.

The Honorable Minister Louis Farrakhan represents the end of a very profitable age of white supremacy. The Nation of Islam’s program of Black unity, land ownership, meaningful education, and economic self-sufficiency is precisely what is needed to reverse the toxic effects of white and Jewish mis-rulership. Jay Bernstein, the Baltimore Sun (the paper with a slaveship in its masthead), and “Baltimore Jewish Life” all represent a “program” of Black disunity, powerlessness, poverty, and failure. And that is why every positive, freedom-seeking Black man and woman was at Morgan State on November 22. And we thank Allah over and over and over that Jay Bernstein and his “program” was not.

(Visit the Nation of Islam Research Group online at www.noirg.org and join the conversation on FaceBook.com/NOIResearch and Twitter @NOIResearch.)