There is no better proof of Minister Louis Farrakhan’s theorem “A White Man’s Heaven Is a Black Man’s Hell” than the legal doctrines known as Primogeniture and Entail—the demise of which the Virginia planter and founding father Thomas Jefferson fought so hard to achieve.

Europe had become inhospitable to its lower classes largely because of its custom of land transfer, which ensured that wealth would always be concentrated in the hands of an elite few. Upon the death of the patriarch of the family, his entire estate of land and property was inherited by the first-born son and none of it went to any of the later-born children. Under this feudal law land and property could not be divided and sold, so the later-born children would have to stay in service to the eldest son if they wanted to maintain their standard of living. This practice kept a tiny few in immense wealth but left the masses with no way of obtaining land or wealth, and this led to dissatisfaction and ultimately popular rebellion and revolution. This practice of bequeathing all wealth to the first born is called primogeniture, and the prohibition against dividing land and property is called entail.

When the European explorers opened the “New World” hemisphere for settlement, the lower classes saw immigration to America as the only way to escape the dreary cycle of landlessness, poverty, and revolution. Thomas Jefferson did not want the same instability to befall the fledgling United States. He believed that everyone, even the very poor, should own land. Of course, “everyone” in Jefferson’s slave-owning mind meant European and Caucasian. In effect, the government became the daddy and every white man that showed up was its first-born son.

Well, this is what created the White Man’s Heaven in America, but with the demise of primogeniture and entail came the Black Man’s Hell. Under the new laws, when the white patriarch died all of his property—including his African slaves—could be cruelly divided among all his children, or to anyone else, and sold off without reservation. Black slave families were destroyed, splintered into oblivion whenever a “master” died. The more (white) children the slavemaster had, the more fractured the Black families were likely to become. This may be why the house slave appeared so distraught at the loss of the white master, for his death meant the destruction of his Black family.

Another provision was thrown into the law such that any child of a slave woman “followed the condition of the mother”; thus, even massa’s children via the rape of the Black woman were legally entrapped in slavery and unable to gain any wealth from their own father through inheritance. Jefferson’s own Black children, by way of his multiply raped slave Sally Hemings, could not hope to gain from Jefferson’s new wealth-building method.

So Jefferson’s mighty work to spread the wealth of America—among whites only—through the elimination of primogeniture and entail brought hope and riches to America’s European immigrants. To them America was a veritable heaven, its streets paved with gold. But for the Black man, Jefferson’s successful effort not only spread the cancerous condition of slavery but undermined a slave’s ability to maintain a semblance of a family structure—and resulted in a Black Man’s Hell.

[SOURCE: HOW WHITE FOLKS GOT SO RICH: The Untold Story of American White Supremacy] 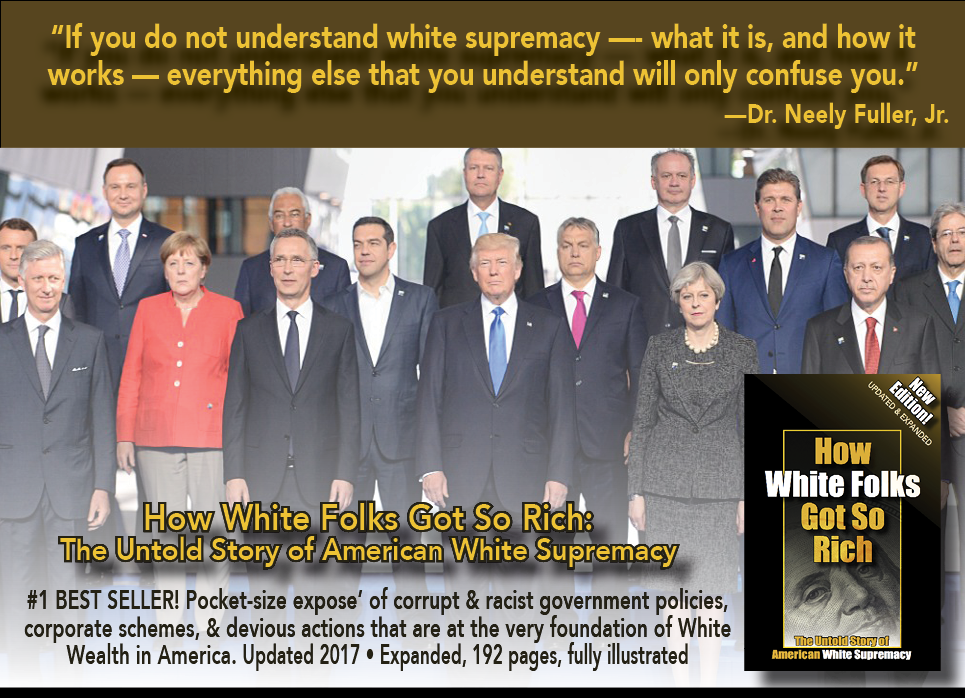 “I advance it therefore as a suspicion only, that the blacks, whether originally a distinct race, or made distinct by time and circumstances, are inferior to the whites in the endowments both of body and mind.”