“O my son!” (said Luqman) “If there be (but) the weight of a mustard-seed and it were (hidden) in a rock or (anywhere) in the heavens or on earth Allah will bring it forth: for Allah understands the finest mysteries (and) is well-acquainted (with them).”

It is quite fascinating to see how Allah (God) guides us to uncover truth even as the evil powers in the world relentlessly work to keep such truth hidden. Just one small fact can reveal and help us understand the reasons behind the many anomalies we just can’t put our finger on. It is also quite fascinating to see how Allah (God), through this guidance process, reveals that He is active in the present tense and not just relegated to being a God Who far in the past “created the Heavens and the Earth.”

We stumbled upon a piece of historical mischief-making as we were studying the false-flag operation called “9/11.” On September 11, 2001, four planes were apparently hijacked; two skyscrapers in New York City and the Pentagon in the nation’s capital were reportedly hit by planes; and one plane purportedly crashed in Pennsylvania, not hitting its intended target. Although no plane struck building no. 7 of the World Trade Center, it fell in the same free-fall manner on the afternoon of 9/11 as buildings 1 and 2 did earlier that morning. It was the collapse of building number 7 that caught the attention of many architects and engineers, like Richard Gage, who could not accept that in one day three steel-structured skyscrapers fell as no other steel-structured skyscrapers before then had ever fallen due to fires. For an in-depth analysis of how and who brought those buildings down, please view “The War on Islam: 911 Revisited, Uncovered and Exposed.”

When I first heard of building number 7 going down, I immediately thought about the fact that Minister Louis Farrakhan was the minister of Temple No. 7 in New York City in the late 60s and early 70s. Could building number 7 and Temple Number 7 be a sign that God wanted us to deeply investigate not only who was behind the bombing of the World Trade Center but also the relationship between that false flag operation and the mission of the Honorable Minister Louis Farrakhan?

In researching Temple No. 7, we came across some startling information. Two days after the assassination of Malcolm X on February 21, 1965, at the Audubon Ballroom—which was owned by a synagogue, headquartered in the basement—Temple No. 7 was firebombed and destroyed. To this day, we have not learned who did this bombing, and fortunately a sectarian war between Muslims who loved Malcolm and Muslims who loved The Most Honorable Elijah Muhammad did not ensue, as the perpetrators had envisioned.

Building No. 7 and the two other buildings destroyed in the WTC complex on September 11, 2001, were bombed to serve a similar propagandistic purpose with respect to the Nation of Islam. The Nation of Islam, first blamed by the media for the September 11th attacks, was targeted to be labeled as “terrorists” because it practiced the same religion as the terrorists who supposedly destroyed the WTC buildings. The Nation of Islam historically has not advocated using the white man’s weapons such as guns or bombs or even knives to seek revenge against white people. But by falsely connecting Minister Farrakhan and the Nation of Islam to those who do use those weapons, the enemies of Islam wanted us to be viewed by Black people in America and people all over the world as a menace worthy of being destroyed.

After the destruction of Temple No.7 The Most Honorable Elijah Muhammad assigned Minister Farrakhan to New York in 1965 to rebuild the Muslim community and the Temple (Mosque) building itself, which was reopened in 1969. The Jewish leadership has warned Minister Farrakhan that he must stop exposing the truth about who the Jewish people really are and are not, or they will destroy his good name for future generations. Minister Farrakhan stated, “Did you know that I was once told by a rabbi here in Chicago: ‘Farrakhan, any man that is seen as an ‘enemy of the Jewish people’ will never be spoken of well in History.’”

Now let us show the power of the Jews to carry out their threat of character assassination, which can last through generations. It is bad enough that Jonathan Greenblatt of the ADL labels The Minister as the Number One Anti-Semite, but to hide The Minister’s accomplishments from his own people and give the credit to someone else less threatening to the Jewish leadership’s control over their “goyim” (cattle) is outright evil. Minister Farrakhan’s legacy must be protected in the same way that he stood up to protect the legacy of The Most Honorable Elijah Muhammad as he was being written out of history by those same forces.

Here is an example of how the Jews back up their threat. We searched the Internet to find out when Temple No. 7 was rebuilt and this is what we found on Wikipedia: “Temple No.7 was destroyed in a bombing in 1965, after Malcolm X’s assassination, which forced Nation of Islam to move the mosque to 106 West 127th Street. The building was redesigned by Sabbath Brown, and in 1976 the mosque was renamed Malcolm Shabazz Mosque, (by Wallace D. Muhammad, the new leader of the Nation of Islam), or Masjid Malcolm Shabazz, to honor the memory and contributions of Malcolm X.” 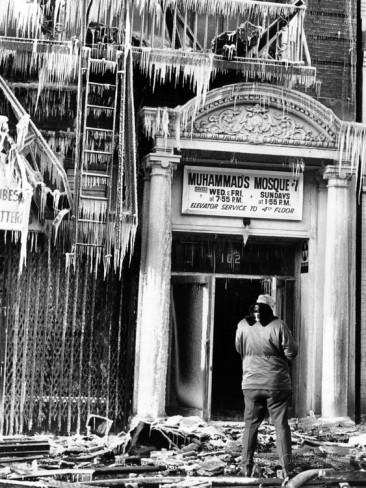 Almost the same wording is found elsewhere: “Temple No. 7 was destroyed in a bombing in 1965, after Malcolm X’s assassination, which forced Nation of Islam to move it to 106 West 127th Street. The temple was also renamed to Muhammad’s Mosque Number Seven by the Nation of Islam. Later Muslims in the destroyed temple’s area rebuilt the structure as a proper mosque. The building was redesigned by Sabbath Brown and the mosque was renamed in honour of Malcolm X as Malcolm Shabazz Mosque or Masjid Malcolm Shabazz.”

Notice how in both “historical” accounts no mention is made of Minister Farrakhan, and the subtle implication is that Temple No. 7 was not rebuilt until 1976 and then built by Wallace D. Muhammad. In fact, Temple No. 7 was rebuilt and reopened in 1969. Fortunately, I have had the personal pleasure of visiting Temple (Mosque) No. 7 a number of times, starting in 1970. Minister Farrakhan was the minister there and the three-story building had been magnificently restored with many Middle-Eastern Islamic motifs, including an aluminum dome and a gold-plated star and crescent. This building included one of the more than 20 Muhammad University of Islam schools established by the Muslims in the 5 boroughs of New York under the leadership of Minister Farrakhan. At street level the building included a restaurant, bakery, and convenience store. You could find Steak n Take restaurants and Shabazz Bakeries all over New York. Under Minister Farrakhan’s leadership Temple No. 7 imported millions of pounds of whiting fish from Peru and “fed the multitudes” in New York. The number of Muslim followers of The Most Honorable Elijah Muhammad grew far beyond the levels accomplished while Malcolm X was the New York minister. 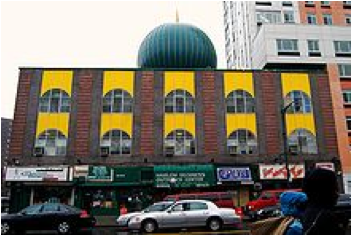 The rebuilt Temple No. 7

The attempt to conceal the good works of Minister Farrakhan points out to us just who these so-called Jews really are and what their primary mission is: According to the FBI files, the enemies of Black people in America are missioned to “stop the rise of a messiah.” The Book of Ezekiel, which makes reference to the “wheel within a wheel,” was written soon after the destruction of the First Temple (in 586 BCE) and “held up the dream of a rebuilt Temple in Jerusalem, including an enlarged Temple complex, in which sacrifice would be offered to an even higher standard of priestly sanctity and ritual purity than that required in the levitical codes of the Torah.” Minister Farrakhan’s “rebuilding of the Temple” in New York parallels the biblical Reconstruction of the Temple in Jerusalem.

As we dig deeper into the destruction of the World Trade Center, the bombing of Temple No. 7, and the assassination of Malcolm X, we will come closer to unravelling the snake that has enveloped the thinking of the people to prevent the rise of The Messiah. So what keeps the Synagogue of Satan from just killing Minister Farrakhan? Well, there is this matter of Ezekiel’s Wheel.

Editors’ Note: Learn more about the Anti-Defamation League (ADL) and the FBI’s COINTELPRO at the Nation of Islam’s MINISTRY OF JUSTICE PRESENTS: “OVERCOMING THE OPPOSITION OF THE ENEMY,” a Saviours’ Day 2018 workshop to be held February 24, 2018, from 12:00 pm to 2:00 pm, in Chicago, IL: 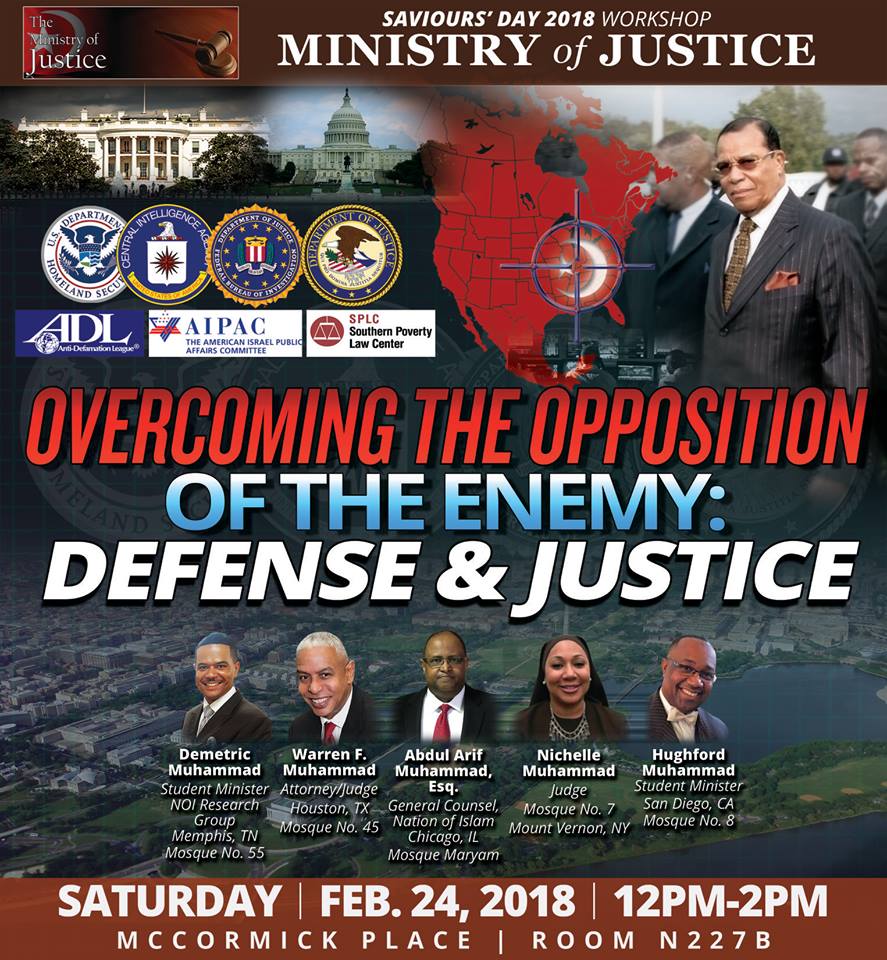