“Some people will say to you, ‘Oh, the Great Pyramid was built by slaves.’ That is utter bullshit. No slaves were ever involved in the construction of the Great Pyramid. As far as I know, there were no slaves in Old Kingdom Egypt whatsoever.”

GRAHAM HANCOCK ON HOW THE PYRAMIDS WERE BUILT

How do I think the pyramids were built? To be honest, I have no answer to that question. And anybody who tells you that he or she knows how the pyramids were built are not telling the truth, because we don’t know, we don’t know. The Great Pyramid contains a number of mysteries. The Great Pyramid first of all is very big. The Great Pyramid weighs six million tons. We can calculate that from its mass. It weighs, it weighs six million tons. Its footprint is 13 acres. It’s more than 750 feet along each side. It’s 481 feet tall. More than two-and-a-half-million individual blocks of stone were used in its construction. 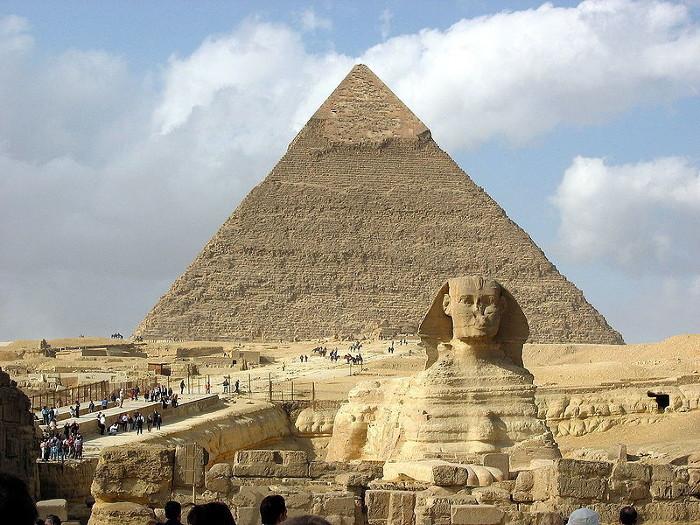 But it’s not just big—it’s really, really precise. The Great Pyramid is locked in to the cardinal dimensions of our planet. The Great Pyramid is targeted on true north within three-sixtieths of a single degree. Now, no modern builder would create a large building and add onto his or her shoulders the additional burden of aligning it to true north within a fraction of a single degree—they just wouldn’t get it; they wouldn’t understand why it was important to do that. But something drove the builders of the Great Pyramid to go to a very great additional trouble not only to create this massive imposing monument but also to lock it on to true north.

And then other things: to incorporate into its dimensions, the dimensions of our planet. I don’t want to get too numerical or possibly even boring here, but if you take the height of the Great Pyramid and multiply it by 43,200, you get the polar radius of the earth. And if you measure the base perimeter of the Great Pyramid accurately and multiply that measurement by 43,200, you get the equatorial circumference of the earth.

In other words, for thousands of years through times, through dark ages when human beings didn’t even know they lived on a planet, never mind its dimensions, that monument has encoded and speaks out the dimensions of our planet on a scale of one to forty-three thousand, two hundred. And the scale is not random. The number 43,200 is derived from a key motion of the earth, which is called the precession of the Earth’s axis. The earth wobbles on its axis very slowly at the rate of one degree every 72 years, and 43,200 is a multiple of 72. In fact, I think it’s 600 times 72, but I need to double-check that. But it’s a multiple of 72—check it out.

So they’ve given us the dimensions of our planet on a scale defined by the planet itself. And that’s an incredibly clever thing to do. How on earth did they do it? Where, where did that knowledge come from? This is why I’m forced to consider the possibility of a lost civilization in the human story. This is a, this is a work of almost but not quite space-age precision. It contains errors but they’re human errors for sure, but they’re very tiny.

The great precision, great skill, great craft—some people will say to you, ‘Oh, the Great Pyramid was built by slaves.’ That is utter bullshit. No slaves were ever involved in the construction of the Great Pyramid. As far as I know, there were no slaves in Old Kingdom Egypt whatsoever. The Great Pyramid—I’ve climbed it five times, I’ve been in every known chamber in the Great Pyramid—it is a work of stunning artistic achievement. You’re looking at the work of masters of architecture at the peak of their skill, not an unwilling labor force—but, but people who gave their labor to that work with love and with care and with attention.

There are blocks of stone weighing 70 tons that have been raised more than 300 feet above the ground—and we’re not talking a couple of blocks. We’re talking dozens of blocks of that weight. The average block weighs about two and a half tons. It’s the moving of those huge blocks of stone, their arrangement into a high precision monument, and the achievement of actually doing it.

Because you know if you make a small mistake at the base, by the time you get to the summit of your 480-with-one-foot-high pyramid, you don’t have a pyramid, you have a corkscrew. They got it all right and nobody today can explain how they did it with the knowledge that is supposed to have been available in ancient Egypt in the Old Kingdom and with the tools that are supposed to have been available. And that’s why I can’t help feeling that we are missing some chapter from the human story.