Minister Louis Farrakhan, leader of the Nation of Islam (NOI) in an exclusive and wide-ranging interview with the Philadelphia Tribune earlier this week, spoke out on Jewish efforts to “defame” him, Black leaders who bow to external forces, and “the wicked, racist bigoted behavior” of those who are trying to prevent his scheduled appearance on the Arsenio Hall Show. 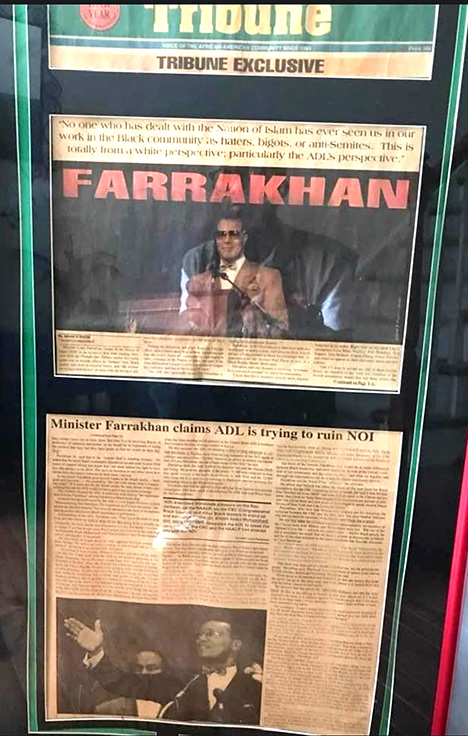 During the telephone interview from his Chicago office, which lasted more than an hour, Farrakhan said that the recent flurry of condemnation and negative news coverage of the Nation of Islam are part of the Anti-Defamation League’s (ADL) campaign to cripple his credibility and that of the Nation of Islam.

The ADL has repeatedly stated that Farrakhan is hateful. bigoted and anti-Semitic.

Farrakhan, in his first extensive interview with any newspaper in nearly a year, said pressure from Jewish groups is being exerted to block his scheduled Feb. 25 appearance on the Arsenio Hall Show as part of a Black History Month observence.

Farrakhan said that Arsenio is receiving “a tremendous amount of pressure” to cancel his appearance.

“I think that this is manifest wicked, raciest, bigoted behavior at its worst. Right now on my desk I have invitations from Mike Wallace, Phil Donahue, Ted Koppel, Tom Brokaw, Connie Chung, Forest Sawyer, and others to appear on their television shows anytime I desire.

“And if I were to accept any one of these (invitations), no member of the ADL (or) member of the Jewish community would dare tell these Whites that they couldn’t have me on their show. But they live by terrifying Blacks in position(s) of authority and power, so we would be so frightened of losing the position that they feel they have given us that we would do their bidding.”

Farrakhan, 61 said that so far “Arsenio Hall is standing strongly.” He added that the entire Black community should rise up and send Arsenio Hall letters of support letting him know that “we stand behind his right to have him (Farrakhan) on his show. The same as Donahue or any other white host should have the right to have me on their show.” He said.

At the outset, Farrakhan gave special thanks to the Black media – both print and electronic – for presenting “the real truth about what is happening today.” If it were not for the Black media, he said, recent events concerning him and the NOI would not have gotten any accurate coverage.

The Minister charged the ADL in particular with fearing “the legitimization of Louis Farrakhan” among mainstream Black leadership.

A recent background report by the ADL’s Civil Rights Division entitled “Mainstreaming Anti-Semitism: The Legitimation of Louis Farrakhan” stated that the Muslim minister “ has recently attained a new level of acceptance among certain mainstream Black organizations and leaders.”

He also spoke at length about the ADL meeting held last weekend in Palm Springs, Fla. Held to arrive at a strategy on how to deal with his “legitimating,” according to an internal ADL document.

“According to what I heard, Abraham Foxman (president of the ADL)  said that they would work with the NOI in our positive programs  in the Black community, but he (Foxman) would fight very vigorously the “anti-Semitism of the NOI.”  Now, Mr. Foxman has called me a master of double-speak, but I know that Mr. Foxman is not going to work with the NOI on its positive programs, because right now the ADL in Chicago has sworn that they would do everything that is within their power to stop the Chicago Housing Authority and its giving of a contract to members of the NOI services for one of the worst crime-infested housing developments in the city of Chicago. And they are fighting at every turn the good things that we are dong with AIDS an the cleaning up our community,” he said, noting that the NOI’s health minister, Dr. Abdul Alim Muhammad for more that three years has been treating AIDS patients in the United States with a treatment discovered in the East African country of Kenya.

He also accused the ADL of initiating a letter-writing campaign to college presidents to frighten them from having members of the NOI peak at colleges and universities. “So they intend to go all out  to destroy the reputation of Louis Farrakhan and the effectiveness of the NOI,” he said.

Farrakhan feels the ADL’s effort to discredit him and the Nation (NOI) are failing. He gave the example of the nearly 25,000 who came out to hear him speak recently at the Jacob Javits Center in New York and the 12,000 who came out to men’s only meeting in Harlem to discuss solutions for eliminating crime in the Black community.

Farrakhan said that he did not realize until the Jesse Jackson presidential campaign in 1984 how much of an influence the ADL had over Black leaders and organizations.

Farrakhan feels that not only do they influence Black leaders and organizations, “but they have considerable influence over Black professionals… including doctors, teachers, lawyers, as well as Black entertainers and sports figures… as Black people (we) can never speak of freedom until we break this inordinate control over those minds of our people who are the natural leaders of the masses. This must be made known and this control must be broken at all cost.”

Discussing the “covenant” with Black leaders and organizations, the NOI minister said the “ADL exercised inordinate pressure on the Rev. Jackson, on the NAACP, on the CBC (Congressional Black Caucus) and other Black leaders to stand up and denounce Khalid (Dr. Khalid Abdul Muhammad) and, more important, denounce the NOI, to break the covenant that the CBC and the NAACP had entered into with the NOI.”

Farrakhan said that he informed the NAACP’S executive director, Dr. Benjamin Chavis, that he would call for a summit of Black leaders and that he had recently done so. Along with the NAACP and the NOI. Farrakhan said, Congressman Kweisi Mfume and some members of the CBC would participate in the summit as well as Joseph Lowery of the Southern Christian Leadership Conference.

The focus of the summit, Farrakhan said, would be to settle differences between Black leadership, and most important, to look at the overall condition of our community and the crisis we face, “and what we together and through our organizations can do to help the Black community survive.”

Farrakhan said the NAACP has ‘affirmed” the covenant.

He added that Mfume has taken the brunt of the heat from the Black community for CBC’s breaking of the covenant. He said it was Mfume who “reached out to us (NOI)” and even though many in the Caucus did not agree, they chose to “keep their tongues until this inordinate amount of pressure was put on them and then some of them began to speak, notably Major Owens of New York and John Lewis of Atlanta.”

Farrakhan, who said that Mfume was signaled out for initiating the covenant between the CBC and the NOI, said “the poor brother (Mfume) was left out there by members of the Caucus and I think that is unfair…”

He said that when the covenant was made approximately ten members of the Caucus were with Mfume and 30 members were not. “But out of his (Mfume’s) love for – not only his constituency – but for Black people, he felt it absolutely necessary that we have a summit to discuss our problems and try to develop solutions to the many problems that face our community,” said Farrakhan.

Questioned about the NOI’s publication “The Secret Relationship Between Blacks and Jews,” Farrakhan said his research team uncovered the information in the book as a result of a controversy that Jews raised when he mentioned that they were involved in the African slave trade along with African. Arabs and white Christians.

“The book was done out of a desire to defend me, not for political purposes, Farrakhan said. The book is a compilation of quotes from various Jewish scholars, Rabbis and historians, Farrakhan said.

“Each quote is documented and footnoted so that any person that reads the quote can go to the exact page and book where it is quoted from and read the entire context of each quote.”

He stressed that the quotes are “absolutely authentic and this the Jews know. In fact in my talking to Jewish Rabbis they asked me if I would denounce the book as a calumny against the Jewish people and I told them if the book were false I would denounce it because I want nothing of falsehood attached to my name.”

He continued, “I said I would denounce he book tomorrow morning if you all would denounce every scholar that we quoted as a liar. And since they have not done that, I would not denounce the book.”

Farrakhan said one purpose of the book is to justify reparations being paid to Black Americans for slavery and segregation. Farrakhan says the book seeks to show Jewish involvement in the slave trade and to highlight the exact role that members of the Jewish community played in the destruction of Black people.

“If you notice all Jews have a record of everything that was done to them by the Gentile nations. Why do they keep a record? They kept a record so that when they were in the position they could document all of the evils of the Gentiles, particularly in the era of the second World War to call for reparations from the German government and people which the Jews are receiving to this day,” Farrakhan said.

Farrakhan says that they (Jews) are a part of “our plan, along with our African brothers, Arabs, white Christians, the United States government and everyone that had a role in the destruction of the Blacks of the Western hemisphere. Everyone has to have a role in paying reparations to the sons and daughters of those destroyed members of the African family.”


Responding to charges that he has been sexist and misogynistic, Farrakhan, who has been married 40 years and has nine children by his wife Khadijah, said such charges aren’t worth dignifying with a response.

“Our history has never been one of discrimination against women, but the problem in the  Black community is Black men killing, maiming and brutalizing Black men, women and children. It is imperative since we have a men’s class in the Nation that trains men and teaches men and civilizes men that we extend this teaching and training to the Black men of the Black community.

“And, so this of course frightens our enemies and they are fighting against us with everything they have including the law.”

Responding to incessant media claims that the NOI’s positive work is grounded in hate and anti-Semitism, Farrakhan said, “This is totally from a white perspective and particularly the ADL perspective. We have never been anti-Semitic.