In his book An Empire of Their Own: How the Jews Invented Hollywood, Neal Gabler provides a history of the origin and development of the film industry. In this “empire” Jewish producers literally created White America’s image of itself. Unfortunately, these producers also provided White America and the world with a negative view of Black people that has persisted for well over a century. 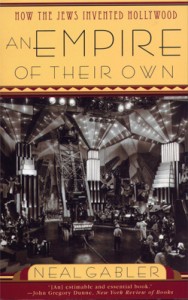 This image has been the worst depiction of any people at any time in history. As a rule, Blacks are shown as trifling, stupid, criminal, boisterous, animalistic, devious, promiscuous, raunchy, fat and sloppy.

This season is no exception; as a matter of fact, things have gotten worse. To see this one need go no further than “Empire,” the widely advertised weekly drama on Fox TV. The opening episode is nothing short of a modern minstrel show. It begins with the camera panning over throngs of Black people who appear to be attending a “Black Lives Matter”-style rally. On stage various speakers call for the release of Lucious Lyon (played by actor Terrence Howard) from prison. Suddenly, in the midst of the rally, the crowd’s attention is drawn toward a large cage being lowered onto the stage from aloft. A black-skinned gorilla is inside the cage beating its chest. Taraji P. Henson, who plays Cookie Lyon, Lucious’ ex-wife, emerges from what turns out to be a gorilla suit, and launches into a tirade against the penal system for holding Black men in prison like caged animals. In spite of the creative attempt to justify the gorilla scene, the symbolic message is clear to the watching world: EMPIRE IS A BLACK MONKEY SHOW!!! 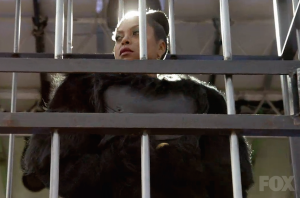 As the drama wears on it gets worse. There is an overarching prison theme. Cookie has recently been released from serving 5 years in prison and now her husband is serving time for murder. Styled as a mafia-type corporate head of a record empire, Lucious continues his criminal activities inside as well as out of jail. Prominent comedian Chris Rock is a fellow prisoner and they clash behind bars.

Black women are depicted in a very unflattering light. Two examples make the point. Cookie is shown as a mean-spirited matriarch who, while her ex-husband is in prison, appears to be on the verge of entering a lesbian relationship with a white multi-millionaire. Gabourey Sidibe, who portrays Becky, is a flamboyant stereotype of the ghetto woman. Her dark, velvet beauty is camouflaged by a blonde wig, morbid obesity, a smart mouth and a negative persona.

The Black male image is dominated, as we have seen, by the prison scene, and by Lucious’ three sons. Of the three, the middle son, Jamal, played by Jussie Smollett, is gay, and was appointed by his father to run the “Empire” in his absence. There is, of course, jealousy on the part of the other two brothers because they were not chosen. What is very interesting, and speaks to Hollywood’s gay agenda, is that Jamal’s relationship with his lover is probably the most positive romantic alliance in the show.

Some of the language used in the program is despicable. Such vulgar expressions as “black bitch,” “yellow ass” and “get your ass together” are sprinkled throughout the script. But the coup de grace for prime time television is probably this statement by a minor actress who is talking to someone on the telephone: “I gotta go. I gotta boo boo!” 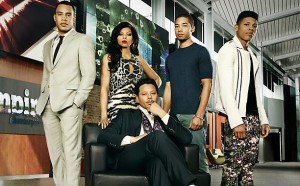 Fortunately, so far the N-word has not been used. However, in a recent issue of Entertainment Weekly, Terrence Howard had the following to say about using the N-Word on Empire: “I’m mad that we don’t say N____ in the show… Why is TV showing something different from reality? Why is there a thing called censorship that stops people from hearing everyday talk. We use N____ every day.”

Black people must pay close attention to “Empire” and all the other television dramas that depict us as buffoons and idiots and the bane of society. These stereotypes of us are viewed by millions of people in America and around the world and we, as individuals, and as a group, are collectively judged by them. 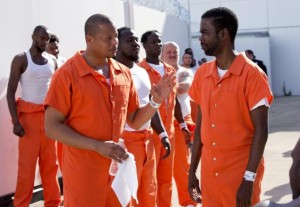 It is true that most of these stereotypic dramas and sitcoms have Black front men and women who masquerade as writers, producers and directors. But the world knows that behind the scenes nothing—absolutely nothing—is produced in Hollywood without the mandatory approval of its Jewish establishment.

Several years ago a young Jewish rapper decided to call himself “Kike-On-The Mike.” Kike is the Jewish equivalent of the N-word. Hollywood Jews crushed this youth and ended his career. Who has ever heard of him? Yet any Black rapper will tell you that the Jewish producers of Hollywood demand that they use the N-word, the B-word, and the W-word or they will have no Hip Hop career.

This is also true of the movie industry. Over the past 20 years Jews in Hollywood have literally gutted the minds of Black youths, turned Hip Hop into a cesspool and nearly annihilated any semblance of respect for the Black culture. Why have they done this?

It is claimed by Jews that for at least two thousand years European Jews were murdered, brutalized and terrorized in every country on that continent, and were expelled from most of them. They say White European Christians hated them, and as a result many Jews came to America, their admitted “Promised Land,” where they ended up enslaving, scapegoating and exploiting Blacks.

American Jews created Hollywood. In their control of Hollywood and the media in general, they have deliberately demonized and stereotyped Black people to protect themselves. In other words, Jews who were the purported scapegoats of Europe have made Black people the scapegoats of America. In “Empire” and other TV dramas, Jews are making sure that Blacks are the gorillas of society that White people track down and destroy!

I would caution Jewish leaders to take heed of an old Black pearl of wisdom:

“If you dig one ditch,

for the ditch you dig

**Antoine Kennedy is a freelance writer in New York City.