A remarkable event in Black journalism occurred last week that may change the way Blacks view this coming presidential election and possibly the way Blacks wield their economic power in the future. That event had nothing to do with the trained and polished Black media personalities like Lester Holt, Gwen Ifill, Bill Whitaker, or Byron Pitts. Black Lives Matter (BLM) activist Julius Jones beat them all when he forced the elusive Hillary Clinton to answer finally for her role in the racist policies enacted and supported by her and her husband, Pres. William Jefferson Clinton, policies that weaponized police and filled America’s prisons with a million Black men.

Black America has been inflamed over the issue of police brutality and mass incarceration, yet it took our Brother Julius with his activist crew to make Hillary face up to her role in those tragedies. On August 11, as her buffer zone of aides, advisors, and Secret Service protectors looked on sweating nervously, Brother Julius did more to expose Hillary than ANY of her email or Benghazi or Whitewater scandals could ever do. In response to his earnest request for her plans to correct the severe racial distortions in the American “justice” system, Mrs. Clinton said:

That was Hillary Clinton’s best answer.

Again, no trained Negro network journalist had gotten Hillary this far down the road on this issue in all her time as a declared presidential candidate. When Bro. Julius reacted with appropriate shock and awe—“What you just said is a form of victim blaming”—Clinton went at him like any plantation mistress should: “Well, if that is your position, then I will talk only to white people about how we are going to deal with the very real problems,” she said.

The pure bankruptcy of this response from the white woman who most Blacks have enthusiastically waved on into the White House is self-evident. In her perfect public opportunity to show herself to be on top of the issue that has American cities erupting in racial rebellion—to show her knowledge, wisdom, and expertise—the empress disrobed for Black America in the most shocking way: “What do you want me to do about it? What am I supposed to do about it?”

But her feeble non-answer really doesn’t put Hillary on the hot seat. Her answer contained no actual surprises. But it sho’nuf puts her Black supporters on Front Street, for they must now explain why they hav 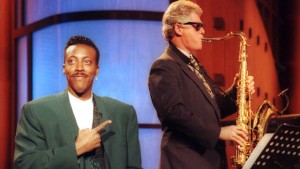 e never asked her this simple question before they lent their names and influence to her candidacy. One might have thought we’d grown a little bit since Bill, “the first black president,” put on sunglasses and played the saxophone on Arsenio Hall’s show, winning over the slaves. And how did he reward us? 225,000 more Blacks were incarcerated
under President Clinton than under President Reagan, the Republican President most disliked in Black America. According to the Washington Post, “During the Clinton administration, the Department of Justice grew faster than any other agency of the federal government.”[1] How many Black communities collapsed, how many Black families were destroyed, how many children were reared without a father, under Clinton’s destructive power? Can the damage even be reversed?

And Hillary’s mass incarceration bona fides are just as robust as Bill’s. In 1994, right before William Jefferson’s Trail of Black Tears, she said with both nerve and verve: 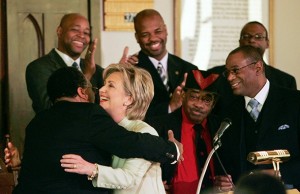 How Hillary Clinton was able to get half of the Congressional Black Caucus to endorse her, including Corey Booker, Lacy Clay, Alcee Hastings, Sheila Jackson Lee, John Lewis, and Charles Rangel, is an enduring mystery. And many notable Black celebrities must be rethinking their support after the crushing BLM exposé.

Only Black Lives Matter, it seems, has the courage to press these candidates where the journalists and civil rights “leaders” have utterly failed. But when we look a little deeper, we find that Black Lives Matter has a critical power those Black pretenders do not possess. As of August 15, 2015, at least 1,007 BLM demonstrations have been held worldwide. The most important of those occurred in the shopping malls of America when they targeted Christmas of 2014 with a strategic boycott, making a direct hit to America’s economic jugular vein.

As Michael Brown lay in the street for four hours, and Ferguson’s Kevlar-clad police-army rolled its tanks and turrets in the street, the leaders of Black Lives Matter boldly and brilliantly targeted the shopping centers of America. They understood that holiday shopping is key for retailers, with sales in November and December accounting for about 19 percent of annual revenue. Using the hashtag #NotOneDime they made deft use of social media and made headlines around the globe as they shut down whole malls on America’s busiest buying day—Black Friday. The result was devastating to a frail and impotent American economy teetering on the edge of collapse. Six million shoppers stayed home, and sales plummeted by 11% on that 4-day weekend alone. That adds up to $7 billion in lost revenue, according to the National Retail Federation.[2]

And THIS $7 billion BLM sledgehammer is why Hillary was forced to stand there and engage—even negotiate with—Black Lives Matter.

In effect, Black Lives Matter carried out Martin Luther King’s blueprint for forcing real change in the American system. In his very last speech in Memphis, Tennessee, Dr. King said that when we Blacks feel pain, “we must kind of redistribute the pain.” He specifically said the targeting of the economy through boycotts and strategic buying forces results from a nation’s white leaders, who, like Hillary, understand nothing but money. The Rev. Dr. Martin Luther King said in 1968:

“We have an annual income of more than thirty billion dollars a year, which is more than all of the exports of the United States, and more than the national budget of Canada. Did you know that? That’s power right there, if we know how to pool it.”

King called this strategy Economic Withdrawal, and that is exactly what Black Lives Matter did last Christmas. They went to the American Retail “Bank”—IN UNITY—and made a $7 billion withdrawal. And that is why Clinton could ignore the “Black leaders” but could not ignore BLM; and that is why a photo of Hillary’s fateful encounter with Bro. Julius et al is on the front page (above the fold) of the August 20th New York Times. 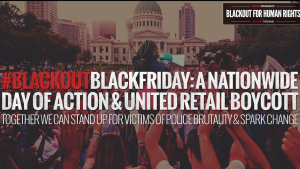 Hillary Clinton also knows that The Honorable Minister Louis Farrakhan has called for a massive gathering of all oppressed groups in America on October 10th of this year in Washington, DC. It is the 20th anniversary of the Million Man March with the forthright, uncompromising, righteous demand of Justice Or Else! He has called for a full boycott of Christmas 2015, in complete harmony with Dr. King’s principled and just Economic Withdrawal strategy. Hillary’s husband Bill answered the first march in 1995 with a punitive push for even harsher, racially targeted “War-on-Drug” laws. Up until the BLM confrontation, the Clintons have eluded their DIRECT responsibility for the current racial disorder.

Hillary Clinton also knows that many of those who have voiced support for her have also shown a greater, deeper respect, love, admiration, and support for Minister Farrakhan. These are intelligent Black men and women in the various fields of entertainment who share the aims and objectives of Martin Luther King, Black Lives Matter, and The Minister, and they are more than willing to tell their fans and followers “Hands Up Don’t Buy!” this Christmas.

We must thank our Brother Julius Jones and Black Lives Matter for their direct action in commanding the political world to pay attention to the serious issues that are affecting Blacks and oppressed people in America. They exposed the fatal weakness of the American political system as a means of securing any real justice. But they also have shown us the power and potential of Economic Withdrawal as a potent political weapon. This Christmas, as our unity amplifies our demands for Justice in America, Blacks are more ready than ever to show America the real power of OR ELSE!

(Order the explosive 2-volume book series DEFENDING FARRAKHAN by the NOI Research Group at http://store.FinalCall.com; join the conversation on FaceBook and Twitter @NOIResearch.)