(Editor’s note: The very best source for Black people to understand CHRISTMAS is to read the Hon. Elijah Muhammad’s teachings on Christmas in chapters 32 & 33 [pages 168-81] of His book, Our Saviour Has Arrived, page 176:

“To call it Christ Mass (a mass of people meeting to worship one of Allah’s Divine Messengers and the last one to the Jews) is wrong because Christ was not born on that day two thousand years ago. Christ was born in 1877. Christ, according to the definition of its name and the teachings I have been taught by God (that I defy any theologian to dispute), means a man coming in the last days to crush the wicked – Christ the Crusher.”

Whatever happened to Jesus in the celebration of Christmas? When did they kick Him out of His own birthday party, and how did St. Nick, Kris Kringle, and the Grinch who stole Christmas get invitations? And why are many Blacks still dreaming of a white Christmas? When we look into the history of the year’s most holy day we may find some answers. And as usual for American traditions we’ll start in Europe.

Where Did Christmas Start?

Throughout history almost every agricultural community around the world engaged in some sort of festive end of the year celebration. In Europe, the shortest day of the year was the cosmic event that drew the most revelers to the town square, but most everywhere else these activities were related to the period of abundance following the yearly harvest.

During the Middle Ages Europe’s rulers tried to infuse a religious component  — the birth of Christ — into those highly sexualized winter celebrations. They hoped this would serve to transition the peasantry from paganism to Christianity, even though they knew that the birthday of Jesus was actually three months earlier in the year. They also knew that the deity they most admired was Nimrod, the ruler who lived to undermine the civilization of Moses, and he was born on December 25th. Nimrod is described as “the prototype of rebellion against the Almighty.” He married his own mother, and after his death she spread the tale that his spirit caused a full-grown evergreen tree to spring up overnight from a dead tree stump. On each anniversary of his birth, she claimed, Nimrod would visit the tree and leave gifts upon it. This is the real origin of the Christmas tree. And this scheming European clergy, who were secret admirers of Nimrod and his ways, conflated the saintly Jesus with the devilish Nimrod, and inspired the gluttonous celebrations we now call Christmas.

Saint Nicholas occupied several peculiar positions in Christian culture including being the patron saint of school children, shipping, and pawn brokers, among other titles. Born in the fourth century in what is now Turkey, his legend would later find its way into America as Santa Claus — a mispronunciation of Saint Nicholas. We can see how they connected him to Jesus by an odd legend that gave him power to raise the dead. According to the story an innkeeper killed three boys and cut up their bodies, intending to sell their remains as pickled pork. Nicholas happened upon the scene, sensed the crime and reassembled the bodies. It was this macabre tradition that may have given him life-restoring parity with Jesus in European minds.

Racism was interwoven in this Christmas folklore through another disturbing tale. Nicholas’ function in the church was to judge the goodness or evil of the children in his domain. He would quiz them on their church lessons, rewarding them with candy and gifts, or chastising them with sticks or pieces of coal. He was accompanied by a sidekick named “Black Pete,” described by one scholar as a “hairy, chained, horned, blackened, devilish monster…clutching a gaping sack in his hairy claws.” Black Pete’s job was to glare at the children while the Nicholas drilled them on their lessons. The menacing monster with African features every now and again “flashed his enormous canines and leaped, growling, toward the frightened children, threatening to beat them with his rod.” Nicholas warned the bad children that this “Black Pete” would stuff the little transgressors into his sack only to be released at the next Christmas. 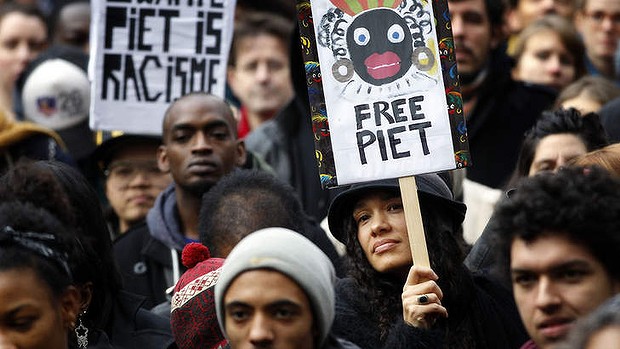 Dutch police arrested 90 people in November, 2014, during a protest over Black Pete, a controversial black-faced sidekick to St Nicholas.

This punitive image of St. Nick softened over time in Europe and to this day they still hold events around the image of “Black Pete” with actors in blackened faces wearing brightly-colored clown suits (see photo). It is probably “Black Pete” who is the inspiration for the popular Dr. Seuss tale “The Grinch Who Stole Christmas.”

The practice of giving gifts in the name of Saint Nicholas was frowned upon by the father of the Protestant church Martin Luther who then introduced Christkindlein — a messenger of Christ — as the gift-bringer. Again, through mispronunciation, Christkindlein came to be known as Kris Kringle.

Though “Black Pete” didn’t make the trans-Atlantic crossing to the “New World” with our chained African forbears, “Santa Claus” reached America in Dutch form along with other unseemly pagan customs. The Massachusetts Puritan Cotton Mather bitterly complained that this imported Christmas celebration mocked rather than honored Jesus: “[T]he Feast of Christ’s Nativity is spent in Reveling, Dicing, Carding, Masking, and in all Licentious Liberty…by Mad Mirth, by long Eating, by hard Drinking, by lewd Gaming, by rude Reveling…” Often white people blackened their faces or disguised themselves as animals or even cross-dressed, presumably to maintain anonymity for much ruder acts, and similar accounts of the early Christmases abound. Rev. Henry Bourne decried the transvestitism, the “Uncleanness and Debauchery,” as well as rampant unlawful fornication or “chambering.” Indeed, there was an annual increase in the number of births in the months of September and October. The Puritans actually outlawed Christmas in their settlement in 1659 and fined those who celebrated in any way. The holiday was reinstated in 1681 but not before it was roundly condemned as blasphemous and far-removed from the way of Jesus.

The Plantation South had its own reasons for promoting the Christmas mythology. To combat abolitionist rabblerousing slave owners promoted a grand vision of the idyllic garden with the happy slaves, and a festive Christmas became central to this myth. Traditionally, Christmas was a time when the end of harvesting idled the workers. The brutality of the planters temporarily receded and the enslaved Blacks came to regard these times as their only respite from the cruelty of plantation life.

They created their own distinctive traditions known by various names including John Canoeing, John Koonering, or other related terms. The festivities included singing, dancing, feasting, and dressing up in the white man’s cast-off clothes. The annual merrymaking served planters’ interests who promoted heavy drinking and partying as a pacifying hedge against the always imminent escapes and insurrections. One Georgia observer recalled: “I have seen the jollity & mirth of the black population during the Christmas holidays. Never have I seen any class of people who appeared to enjoy more than do these negroes…” 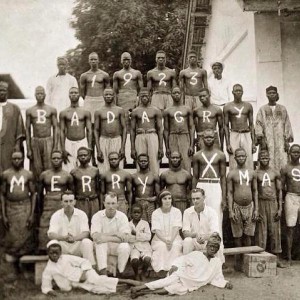 Just as the early Christian leaders bargained with the truth of the birth of Christ, the burgeoning merchant class in America positioned themselves to make Christmas a bonanza of consumerism and boundless profits, and so Santa Claus was commandeered as their portly pitchman. Between 1880 and 1920, advertisers began to encourage the purchase of manufactured rather than home-made gifts. Wrapping paper and Christmas cards were introduced and Christmas bonuses and “Christmas Club” bank accounts promoted the holiday as the season of boundless spending. As The Hon. Elijah Muhammad wrote: “The merchants’ pockets are made fat for Christmas — the tobacco factories, the beer and whisky traffic, and wine….There is no holy worship on that day for [Jesus].” The fact that the biggest profiteers on Christ’s birthday are Jewish—in whose synagogues the name of Jesus can not even be uttered—seems to concern no one. Jewish mega-marketers like Gimbels, Macys, Neiman Marcus, Sears, etc. all do their profitable best on this holiest day of the Christian year.

This Wall Street version of “Christmas spirit” has led to a Black Christian rejection of this profanation of Jesus’ life whose gifts to humanity have been bargained away in favor of a morbidly obese white American idol whose jollity is driven solely by credit card debt. Celebrations like Kwanzaa, with its seven principles that are truly worthy of the name—Unity, Self Determination, Collective Work And Responsibility, Cooperative Economics, Purpose, Creativity, and Faith—are gradually infusing more meaning into the end-of-the-year Black celebration culture. Certainly, Christmas as it is practiced in America is a strange European tradition that has gone out of its way to exclude the Saviour Himself, and thus it is nothing that an awakened Black family ought to be involved in.

What does the Bible say about Christmas?

Jeremiah 10:2-5: Thus says the Lord: “Learn not the way of the nations, nor be dismayed at the signs of the heavens because the nations are dismayed at them, for the customs of the peoples are vanity. A tree from the forest is cut down and worked with an axe by the hands of a craftsman. They decorate it with silver and gold; they fasten it with hammer and nails so that it cannot move. Their idols are like scarecrows in a cucumber field, and they cannot speak; they have to be carried, for they cannot walk. Do not be afraid of them, for they cannot do evil, neither is it in them to do good.”