Pope Francis recently concluded a tour of three South American countries: Ecuador, Bolivia, and Paraguay. The pope delivered a scathing rebuke of capitalism, and referred to the poor as victims of racism and poverty. The Holy Father’s denunciation of the wealthy bankers is akin to Ezekiel’s condemnation of the Jewish moneylenders in the Old Testament for their practice of usury—that is, the excessive and abusive interest rates charged to the poor. The pope called for the redistribution of wealth and land for the poor. He also apologized to the Indigenous people of all three countries for the inhumanity of their enslavement by the Catholic Church, the loss of their dignity, and their marginalization in today’s society.

The tone, tenor, and substance of the pope’s comments were very similar to the messages delivered to the predominantly Black audiences The Honorable Minister Farrakhan has been addressing around the nation as he prepares for the upcoming October 10th gathering in Washington, DC, for the 20th Anniversary of the Million Man March. In fact, they are the very themes The Minister has articulated for over 50 years as the National Representative of the Honorable Elijah Muhammad and the Nation of Islam; namely, a new world order, the empowerment of the poor, the wickedness of the international bankers, and the racism of the Church. Even though they were speaking to two diverse audiences, in many ways it seems as though The Minister and The Pope were singing from the same hymnal. 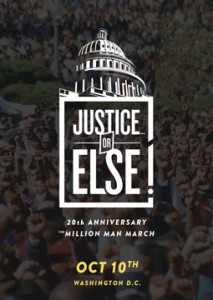 To some observers, however, the pope seemed to be hedging his bets. The pontiff denounced the role of the international bankers and chastised corrupt governments, but failed to specify and identify the institutions that were victimizing the people and keeping them impoverished. Min. Farrakhan, however, has not hesitated to expose the international bankers who continue to oppress the masses of the people. A cursory overview of the banking system, for example, will show that the international financial industry is primarily a Jewish-dominated franchise. They include the Rothschilds, the heads of the Federal Reserve System, the titans of Wall Street, and the cartels that control the International Monetary Fund and the World Bank, among others.

Many had expected the pope to mention specific cases of abuse by corrupt government officials, such as the case of the clash at the soybean estate in Paraguay’s Curuguaty hinterland that left 11 peasants and 6 police officers dead. Ignacio Telesca, a historian and former Jesuit priest, said, “It’s a shame, because Paraguayans needed Francis to say something specific about inequality and land conflicts, but instead he spoke in a general way as if he were talking about any Latin American country.”

Instead, the “Vicar of Christ” asked the Indian population to forgive the Church for its genocide, slavery and racism that decimated the Native American population in Latin America. The pope did not speak of atonement, reparations or reconciliation, thereby rendering his apology somewhat meaningless.

To the pope’s credit, however, he was being more Farrakhanesque in his call for the redistribution of land. Min. Farrakhan, in his national speeches, reminded audiences that the Rev. Dr. Martin Luther King spoke about having gone to the mountaintop and having seen the “Promise Land”—not the promised sky, but land. Dr. King pointed out that the U.S. government had given to European immigrants land that had been promised to the Black ex-slaves, along with equipment and training to develop the land. The persistent poverty of Black America was the result of that broken promise of land redistribution, and that’s why Dr. King, in planning the Poor People’s March in 1968, said he was coming to Washington “to get our check.”

Given the Holy See’s outspokenness about the bankers’ war on the poor, it would be interesting to see the pontiff assemble the Jewish banking cartel and ask their cooperation in modifying the predatory practices that have enslaved a significant portion of his followers.

If the pope were to be truthful, he would have to remind these leading Jewish bankers about the Old Testament prophets’ edicts about such predatory practices. The pontiff would have to tell the richest ethnicity in the world that the laws of Moses forbade them from loaning money and charging interest (Ex. 22:25). He would have to remind the Jewish bankers that according to Leviticus 25:36,37, there shall be no creditor and no taker of interest. The pope would have to remind them that Ezekiel condemns their practices as a heinous sin (Ezekiel 18:8, 13, 17). Pope Francis would have to tell Janice Yellen, head of the Federal Reserve, that Nehemiah (5:7,10) prohibited rich Jews from lending to others and exacting heavy interest. Although these were strictly prohibited practices, the Jews ignored the mandates of the prophets and exploited the poor by establishing the world’s largest banking conglomerate.

The Pope’s demand for a new banking system would make him a formidable enemy of the Goldmans and the Sachses, the Loebs, the Lehmans, the Rothschilds, the Warburgs, the Lazards, and the Seifs. His attempts to abolish and replace such a wicked system would also earn for him the cover of the New York Times as the “world’s leading anti-Semite.”

Therefore, the pope’s call for an end to unbridled capitalism—which he admits has ushered in an era of “new colonialism”—will fall on deaf ears. His characterization of the unfettered pursuit of money as the “dung of the devil” sounds good and excites the downtrodden in Latin America, but it does nothing to move the rich Jewish families that control the world’s financial system to eradicate the poverty that they created.

Bolivia, Paraguay, Ecuador and the rest of Latin America have suffered from acute exploitation of their countries. Silver and gold deposits and slavery helped finance the Spanish empire, bankroll global European and American colonialism, and fill the treasury of the Vatican.

By admitting the Church’s complicity in the oppression of Latin America during the colonial era, the pope is also calling for the shattering of the “new colonialism,” but what’s lacking is a comprehensive remedy to rectify the damage done to the original owners of the land.

The pope as the “Vicar of Christ” implies that he should be able to absolve the impoverished African nations of the debt and misery they suffer. If Christ returns with the power to crush the wicked (Malachi 4:3), then relieving the Latin American and African nations of the financial burdens imposed on them by the racist, recalcitrant Western powers should be an easy task for the Vicar of Christ to pursue.

The Catholic Church is one of the richest institutions in the world. Much of its wealth is derived from the profits of slavery and the exploitation of the natural resources of many countries. The pontiff adds, “I say this to you with regret: Many grave sins were committed against the native people in America in the name of God.” The expiation of those sins can be accomplished by the Church and the families of the Jewish merchants who benefitted from the destruction of Latin America when they jointly repair, through debt relief and reparations, the damage done to the Indigenous peoples.

The pope should negotiate with the international bankers to devise a plan by which just reparations are given to those who have suffered hundreds of years of European oppression, and their lives are made whole again. But good luck with that. Talking with the oppressors of the people is one step in the right direction; however, talk without remedial action is pointless. Minister Farrakhan has asked for a meeting with the leaders of the Jewish community for years. Instead of meeting with him for “a sensible, intelligent dialogue,” they continue to launch a public relations campaign to undermine him in the eyes of the American public. The pope’s call would result in nothing different—unless he joins with The Honorable Minister Louis Farrakhan for the 20th Anniversary of the Million Man March in Washington, DC, on October 10, 2015, where a clear signal will be sent to the wicked of the world: “Justice, Or Else!”

(Jackie Muhammad is a member of the Nation of Islam Research Group. Visit them online at https://noirg.org and join the conversation on FaceBook.com/NOIResearch and Twitter @NOIResearch. He can be reached at jacrb519@ aol.com.)