John Stockwell, former CIA Station Chief in Angola spent 13 years in the agency.  Stockwell is the highest-ranking CIA official ever to leave the agency and go public. He estimates that over 6 million people have died in CIA covert actions, and this was in the late 1980’s. Here, in a 1989 interview with NPR, he discusses his encounter with a co-worker who was teaching African police how to torture:

Listen to the audio:

…However, the money, the millions and millions of dollars we put into this program [helping Central America] inevitably went to the rich, and not to the people of the countries involved. And while we were doing this, while we were trying, at least saying we were trying, to correct the problems of Central and Latin America, the CIA was doing its thing, too. The CIA was in fact forming the police units that are today the death squads in El Salvador. With the leaders on the CIA’s payroll, trained by the CIA and the United States.

We had the `public safety program’ going throughout Central and Latin America for 26 years, in which we taught them to break up subversion by interrogating people. Interrogation, including torture, the way the CIA taught it. Dan Metrione, the famous exponent of these things, did 7 years in Brazil and 3 in Uruguay, teaching interrogation, teaching torture. He was supposed to be the master of the business, how to apply the right amount of pain, at just the right times, in order to get the response you want from the individual.

They developed a wire. They gave them crank generators, with `U.S. AID’ written on the side, so the people even knew where these things came from. They developed a wire that was strong enough to carry the current and fine enough to fit between the teeth, so you could put one wire between the teeth and the other one in or around the genitals and you could crank and submit the individual to the greatest amount of pain, supposedly, that the human body can register. 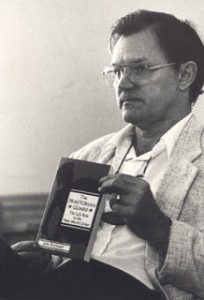 Now how do you teach torture? Dan Metrione: `I can teach you about torture, but sooner or later you’ll have to get involved. You’ll have to lay on your hands and try it yourselves.’

And this is what the CIA was teaching them to do. And one of the women who was in this program for 2 years – tortured in Brazil for 2 years – she testified internationally when she eventually got out. She said, `The most horrible thing about it was in fact, that the people doing the torture were not raving psychopaths.’ She couldn’t break mental contact with them the way you could if they were psychopath. They were very ordinary people….

There’s a lesson in all of this. And the lesson is that it isn’t only Gestapo maniacs, or KGB maniacs, that do inhuman things to other people, it’s people that do inhuman things to other people. And we are responsible for doing these things, on a massive basis, to people of the world today. And we do it in a way that gives us this plausible denial to our own consciences; we create a CIA, a secret police, we give them a vast budget, and we let them go and run these programs in our name, and we pretend like we don’t know it’s going on, although the information is there for us to know; and we pretend like it’s ok because we’re fighting some vague communist threat. And we’re just as responsible for these 1 to 3 million people we’ve slaughtered and for all the people we’ve tortured and made miserable, as the Gestapo was the people that they’ve slaughtered and killed. Genocide is genocide!