For the last 40 years American Black farmers have lived a hellish nightmare deliberately orchestrated by the United States Department of Agriculture (USDA) and its local Farmers Home Administration (FmHA – now the Farm Service Agency, FSA) offices to confiscate Black owned land and homes. A review of the now historic Pigford v. Glickman class action suit by Black farmers will help one to understand the extremely vicious attack against Black farmers. (For details see https://www.blackfarmercase.com/Background.aspx or http://www.dcd.uscourts.gov/pigfordmonitor/index.htm).

The story of 67 year old military veteran and farmer Eddie Wise and his wife, Dorothy (to whom Eddie refers lovingly as “my Brown Sugar”), is the latest example of the outrageous action by the U.S. government against a Black farmer.

On Wednesday, January 20, 2016, around 7:30 a.m., at least fourteen Federal Marshals in full military gear with full scale military guns drawn, along with several county sheriff officers, descended on the 106 acre farm in Nash County, N C, and forcibly escorted Eddie Wise and his wife, who was still in bed and suffers from a debilitating medical condition, out of their home and off the land that they have owned for more than 20 years.

Not only did the Federal Marshals render Eddie and Dorothy immediately homeless and landless, but did not allow them to take any of their belongings except the clothes on their backs. They also insisted on “securing” every firearm legally owned by Mr. Wise.

A Duke University Adjunct Professor, a friend of the Wises, took pictures (shown here) and acquired some sound, but was summarily put off the property also.

For the last few weeks media coverage has consistently covered visibly armed White militants who have illegally occupied federal land in Oregon. The response by the federal government and local law enforcement officers was a kindly appeal for the white militia to peacefully end their illegal occupation and leave, but until recently to no avail.

Yet, Mr. Wise and his wife have suffered the height of indignity and racist degradation. Which leads to the question, “Don’t Black farmer’s lives and possessions matter?”

Mr. Wise is in fear of his life and the life of his wife. “I believe if I had shown one ounce of resistance, the Federal Marshals would have killed me. I actually believe that’s what they came to do. I may as well live in Russia or Syria or North Korea,” said Mr. Wise, his eyes moist with tears.

Saving their land has been a long and exhaustive process for the Wise family. The ugliness of the one dimensional unfairness, racial characterization, and mental traps set for this family and thousands of other Black farmers by the USDA, and a corrupt legal system, defy reason and logic. Black farmers are a racial minority and do not represent a large political power block, and therefore are unfairly treated like terrorized slaves captive in their own country, a country they were vital in building.

The farm organization, Black Farmers and Agriculturist Association (BFAA), was organized in 1997 to protect, protest, raise much needed funds, and bring national attention to the plight of Black farmers. At the time Black farmers were losing 2,000 acres of farm land per day. BFAA has come to the aid of Black farmers with such needs as groceries, to pay light bills and tax bills, travel expenses, lawyer fees, and helped buy books for college students of farmers.

How can you help? We ask you to join with us in support of Eddie and Dorothy Wise by sharing this tragic story on Face Book, Twitter, and by Email. Help us get Eddie and Dorothy out of a motel which is costing too much per week just for bed and bath; and support the fundraising to help us get their home and farm back. Please contribute at gofundme.com/jgaaq4. 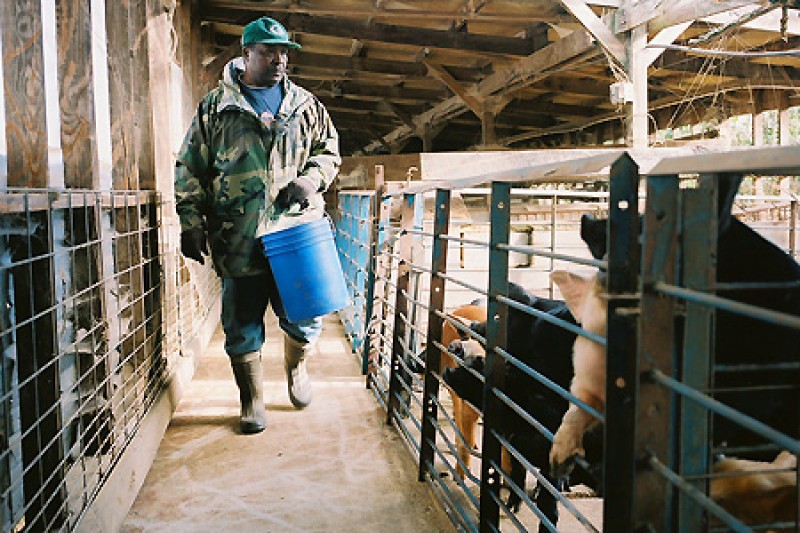 SOME BACKGROUND INFORMATION ON THE WISE CASE

1. “In 1993 Wise and his wife applied for a loan to purchase a 106-acre hog farm. Wise said that at first the FmHA County Loan Officer didn’t let him know that the farm had been “earmarked for minority farmers.” Then officials tried to reappraise the farm to increase the value, but the value actually dropped. Lastly, a white farmer who wanted the farm paid a Black woman to apply for him. She was one of the final two applicants whose names were drawn from a hat. “We won the draw,” Wise said with a smile.

Wise continued to face resistance from the county loan office, which is now demanding that he provide a production history going back five years and a production plan for the new farm.”

2. “Eddie and Dorothy Wise raise hogs on 106 acres near Whitakers, in east-central North Carolina. Eddie is a fourth-generation hog farmer but the first to own a farm; his father and grandfather were sharecroppers. During a 20 plus career in the military, and as an ROTC instructor at Howard and Georgetown Universities, Eddie raised hogs in his spare time. It was his dream to return home to North Carolina and farm full-time. When he retired from the Army in 1991 at the age of 48, that’s what he set out to do. Dorothy Wise grew up in Washington, D.C., but she too hoped to one day live on a farm. When she and Eddie met at Howard University in the 1980s and she discovered he was a farmer, it seemed that her wish had come true.

Still, it took the Wises five years, until 1996, to secure the loans they needed to buy their farm. They were repeatedly turned down by local government loan officers who, the Wises are convinced, did not want African American farmers to succeed. It was only through determined effort and much research and legwork that the Wises were able to receive the financial help for which they qualified.

Today the Wises have 250 hogs, which they raise from birth and sell to a Black-owned pork processor in the area. Eddie’s lean pork, raised without hormones or antibiotics, is sold at a premium in area supermarkets. Finding such a market niche is the only way the Wises can compete with the much-larger farms that mass-produce hogs for the large meatpacking companies.”