What does a fox-breeding experiment in Russia in the 1950s to the 1980s have to do with Patmos Island in 4,600 BC? Far more than we may now believe.

One of the most controversial features of the Teachings of The Most Honorable Elijah Muhammad is his assertion that the white man is a created being and that he is a product of a breeding experiment carried out by a scientist named Yakub 6,600 years ago. Over 600 years, Mr. Muhammad teaches, Black-skinned men and women were “grafted” over many generations to become the white-skinned Caucasian we know today.

It sounds outlandish to the Western-trained ear, but not to scientists and geneticists who have recently confirmed that a genetic convulsion occurred in the human genome just about 6,000 years ago—a mutation that created white skin and blue eyes. They are at a total loss to explain how it happened, but they know it did. Clearly, science backs The Hon. Elijah Muhammad.

But science is a latecomer to this reality. Breeding of animals is an ancient activity of animal husbandry. Evidence exists that the domestication of animals was practiced with the dog, sheep, goat, cat, pig, cow, guinea pig, chicken, and donkey all before 5,000 BC. It should be of no real surprise that at some point someone would try those same techniques on human beings. Whites have engaged in the breeding of human beings for many centuries—hence the “mulatto” and “octaroon.” The ancient Egyptians took it for granted that the strange trouble-making newcomers with light skin were the issue of some unnatural process. They called them Tamahu—Tama meaning “the created ones” and Hu meaning white. The wealthy families of Europe like the Rothschilds were known to require that family members marry within their own family—a form of inbreeding. No less an iconic figure as George Washington was in the 1700s actively breeding human beings, seeking the same result on his Virginia plantation as Yakub sought on Patmos Island 6,600 years ago.

Dr. Dmitri Konstantinovich Belyaev was a Russian geneticist who carried out a decades-long effort to breed domesticated foxes—an experiment that is widely believed among scientists to be the most extraordinary breeding experiment ever conducted. A 2010 article in Scientific American stated that Belyaev “may be the man most responsible for our understanding of the process by which wolves were domesticated into our canine companions.”

The genetics of wolves, dogs, and foxes are not all his experiment revealed.

Belyaev selectively bred wild silver foxes over 35 generations and 40 years for the sole trait of friendliness to humans. His “domestic elite” foxes were much more friendly to humans and actually sought human attention, but they also showed new physical traits that were entirely unexpected. The melanin of the tamer foxes appears to have been affected. Many of the new, friendly foxes had spotted or black-and-white coats. Some were completely lacking pigmentation in specific body areas. Unlike the wild foxes, Belyaev-bred animals had floppy ears, barking vocalization, tails that curled over their backs, and earlier sexual maturity. Instead of developing a fear response at six weeks of age, the domesticated foxes did not show it until nine weeks of age or later. 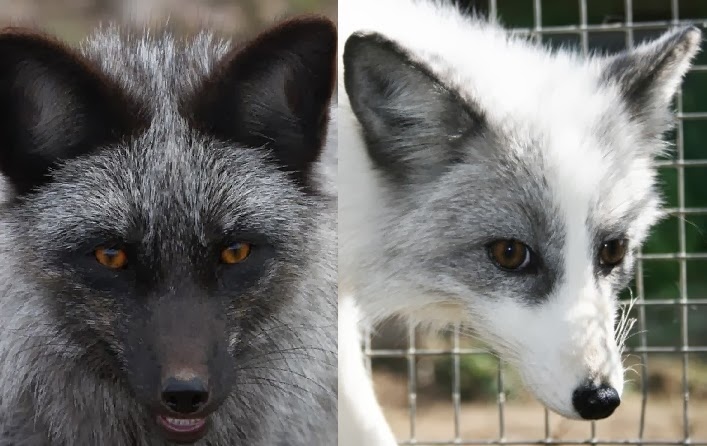 Dr. Belyaev’s before and after silver foxes.

So Belyaev was seeking to create a new fox with a different nature or behavior. The resulting physical effect on the color of the foxes indicates a clear association between the “fight-or-flight” chemical adrenalin and the color-causing agent melanin. They noticed that serotonin levels—that chemical which affects the psychological state of a being—were significantly higher in the test foxes.

Dr. Belyaev’s experiments allow us to speculate how Yakub may have come to link melanin with behavior. The new foxes would be unrecognizable in the wild among its own kind—its seeking of attention and affection from its natural human enemy would be suicidal. Incredibly, its new human-centered orientation—engineered in just a few years—allows humans to overrule its million years of natural instincts and inserts a new mentality altogether. They look like foxes but their behaviors are the antithesis of the naturally evolved fox.

It seems that this connection between behavior and coloration was understood by Mr. Yakub. Was he able to observe the animal-breeding experiments in his time to see what Dr. Belyaev sees today? Could a new vessel be formed to accept a new teaching antithetical to human societal norms? Mr. Yakub knew that breeding humans for color would affect the behavior of his end-product—the white man. The geneticists of today confirm the timing of Yakub’s experiment on Patmos, and Dr. Belyaev confirms the how fast and effective that grafting method can be.

See more in this video: https://www.youtube.com/watch?v=0jFGNQScRNY