Mark Heffernan of Wisconsin recently responded to one of our articles with an excellent analysis of the money system and how the issuance of currency is used as a weapon of oppression against people and nations. The Honorable Minister Louis Farrakhan has often discussed the role of international bankers, economic hit men, usury, crop lien merchants, and the Federal Reserve in the subjection of nations. The book released by the Nation of Islam, The Secret Relationship Between Blacks & Jews, Vol. 2, details how the slavery-based cotton economy developed in the American South. This commentary by Mr. Heffernan about the role of DEBT adds to our understanding: 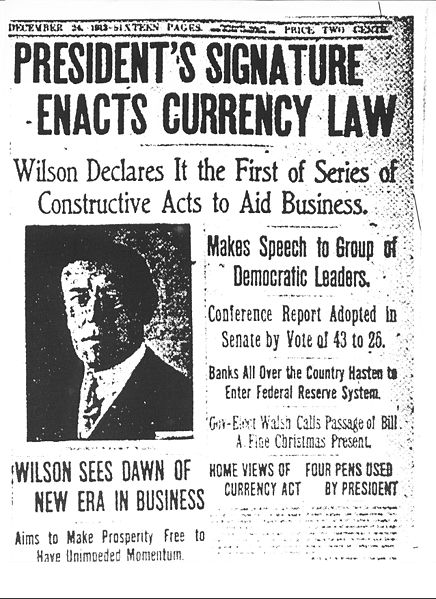 1913: U.S. Currency moves into the hands of private bankers.

Whoever issues the currency controls the entire nation

Our people would do well to look at the idea that whoever controls the issue of the currency controls the entire nation. White European international bankers have been the ones who have issued and controlled the currency in this country and around the world for a very long time.  So, not only have they been funding the actual physical slavery of Black people, they have also been indenturing the activity and claiming control over the resources of all people by controlling the issue of the currency which they have been doing As Debt since the Middle Ages! The dynamic by which central banks extended their control is summed up by British economist Richard Douthwaite:

“Currencies produced by one group for use by another have been instruments of exploitation and control.  For example, whenever Britain, France, or one of the other colonial powers took over a territory during the ‘scramble for Africa’ towards the end of the [eighteenth] century, one of the first actions was to introduce a tax on every household, a tax that had to be paid in a currency that the conquerors had developed for the purpose.  The only way Africans could get the money to pay the tax was to work for their new rulers or supply them with crops.  In other words, the tax destroyed local self-reliance, exactly as it was supposed to do….Very little has changed.  Over 95 percent of the money supply in an industrial country is created by banks lending it into existence. These banks are usually owned outside of our areas, with the result that we have to supply goods and services to outsiders even to earn the account entries we need to trade among ourselves.  Our district’s self-reliance has been destroyed just as effectively as it was in Africa, and whatever local economy we’ve been able to keep going is always at the mercy of events elsewhere, as the current world economic crisis is making too clear.”

We must appreciate the importance of color based racism in its many facets and disguises as an ongoing residue from the colonial period to the present day.  But we should also be aware of the role the money system plays in both our oppression and in the remedy. If We The People do not regain control over the institutions for creating currency and giving credit then we miss an important part of the story.

A People Centered Economy recognizes that it is the energy of the people themselves that gives the current—the energy flow—the currency to the economy.  In a People Centered Economy that recognizes/credits the energy contributions of every person in the economy there can be no people that do not have currency, there can be no poor people except for those who absolutely will not contribute.  Forced contribution is slavery, is theft. Invalidated contribution is also slavery, also theft. May I suggest that you look at this historical presentation on the subject of money and the white international bankers that have maintained control of this usurious system.
(See http://www.iamthewitness.com/books/Andrew.Carrington.Hitchcock/The.History.of.the.Money.Changers.htm)
The People must be given enough information and proper analysis to learn and understand about the economy and its critical role in their lives. All People Of Good Heart can come together to right the wrongs done in color based racism and in the sociopathic system of money that knows no color distinctions in its oppression of all. The history shows that it will buy off people of any and all colors to maintain its enslavement of the people.
It is interesting to note that Islam is the only of the world’s three Abrahamic religions that still condemns usury, and many assess the war on Islam to actually be based on the issue of money using the other pretexts [ISIS, Iran nukes, terrorism, Gaza, etc] as cover.  However, should the question of usury and the evil of it along with banker controlled currency not become the focus of our discussions around slavery it is likely that the geographic locus of control of bank issued currency will simply change from Europe to China or Russia or even Africa without a single hitch or disruption in the actual enslavement of The People of the world through the use of private issue debt based currency.
Mark Heffernan