By the NOI Research Group

In Ferguson, Missouri, last week, the white producer of Don Lemon’s CNN news show was told by a National Guard soldier, “You want to get out of here because you’re white. Because these niggers, you know, you never know what they’re going to do.”

You may never know what “niggers” will do, but we DO know ABSOLUTELY what whites HAVE DONE, and why we MUST heed the words of the Messenger of Allah, The Most Honorable Elijah Muhammad:

“We need land wherein we can build our own society free from the tension, hatred and violence that have accompanied our race relationship with the white race of America. When you learn that the white man is not your brother, you will readily begin to see and accept the Divine Plan that Almighty Allah (God) has in the working for our people. Who has been our aggressors and murderers ever since we have been in America? Who, by nature, was made quick to shed blood — even his own?”

As the troops descend upon Ferguson, Missouri, in a grotesque display of punitive white supremacy, let us never forget The Messenger’s words in light of what occurred a century ago less than 20 miles to the east of Missouri’s current militarized zone. One of the bloodiest incidents of white savagery ever seen in America has been wiped clean from nearly every American history book. It was uncovered and exposed by the Nation of Islam Research Group and published in The Secret Relationship Between Blacks & Jews, Vol. 2.

Last week, Ferguson, Missouri Blacks were demonstrating against the wanton murder of an unarmed Black youth named Michael Brown. Police were caught on camera screaming, “Bring it! Bring it you f—ing animals!” That is not much different from the Star’s 1917 report that whites “stood around in groups, laughing and jeering while they witnessed the final writhings of the terror and pain-racked wretches who crawled to the streets to die after their flesh had been cooked in their own homes…”

The savage massacre was the result of the economic conflict generated at the end of legalized slavery, when whites set about to systematically remove Blacks from the American workforce in order to replace them with immigrants from Europe. By any standard, this ethnic cleansing would be seen as identical to the Nazi policies of Adolf Hitler. American history books, however, remember this wicked activity as the “Labor Movement”—the mass campaign that gave us the Teamsters, the American Federation of Labor (AFofL), and the Congress of Industrial Organizations (CIO), and many other unions that secured white working families economically but sentenced Blacks to everlasting poverty and perpetual unemployment.

In East St. Louis in 1917, the trouble started because white business actually preferred Blacks, who were known to be highly skilled and dependable workers. The American Federation of Labor was then led by a conniving racist named Samuel Gompers, a Jew who proved as willing as any hooded Klansman or jack-booted Nazi to employ violence and murder to achieve his Aryan dream. He complained bitterly that the hiring of Blacks “has reached the point where drastic action must be taken…to get rid of [them].” And thus commenced an American massacre of Gaza-like proportions.

As St. Louis cleared the bodies from the roads and ditches, the horrified former President Theodore Roosevelt condemned the horrifying white violence, which he said “was waged with such appalling fatality as to leave an indelible stigma upon the American name.” For his part, Samuel Gompers actually defended the murderers, pinning the blame on the business leaders of St. Louis, who, he said, had been “luring colored men into that city to supplant white labor.” Roosevelt then alluded to Gompers’ own heritage: “In the past I have had to listen too often to the same kind of apologies for the murders committed against the Armenians and the Jews….I say to you, sir, that there can be no justification, no apology for such gross atrocities…”

The great Black scholar W.E.B. Du Bois investigated the East St. Louis massacre for the NAACP and declared that it was “engineered by Gompers and his Trade Unions.” He concluded, in striking harmony with The Most Honorable Elijah Muhammad, that the massacre “brought the most unwilling of us to acknowledge that in the present Union movement, as represented by the AFofL, there is absolutely no hope of justice for an American of Negro descent.” The charge made by America’s leading Black intellectual and activist could not have been clearer: the most prominent and powerful Jew in America, Samuel Gompers, had “engineered” a massacre of scores of innocent Black men, women, and children. Indeed, there is no Ku Klux Klan leader or group of them who have ever been charged with committing that level of mass murder against Black Americans! As the Most Honorable Elijah Muhammad would say, “Think about that.”

Let us not miss the relevance of this 1917 incident to the shooting of Michael Brown in Ferguson, Missouri, in 2014, by policeman Darren Wilson. Even though the ex-president Roosevelt and the preeminent Black intellectual Du Bois agreed on the culpability of America’s most powerful union leader, Samuel Gompers never faced a single day in jail; he did not lose a day of work; he faced no official investigation for his central role in the mass murder of Black American citizens. And neither will Ferguson policeman Wilson be held responsible for his actions that ignited an international firestorm of protest.

And that is no mistake; it is not a failure of leadership. Both Wilson and Gompers are stalwart pillars of American white supremacy, both of whom stepped up to take on the bloody responsibilities of white rulership. Gompers, as a high-level member of the ruling class, had to establish the racial hierarchy in the American labor market, ensuring that Blacks were firmly locked in plantation and maid service at the bottom levels of society. So adept was Gompers in this role that Jewish scholar Paul Berman described him as “The most accomplished and admirable Jew in American history.” An imposing monument dedicated to Gompers in the heart of Washington, DC, secures his official place in the shaping of white America. 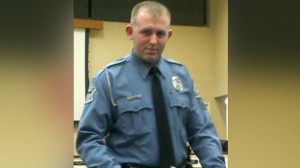 And Ferguson policeman Wilson performed a vital function as the slave-catching enforcer of a policy that is as traditional and ingrained as the Fourth of July. His street-level role, which he performed with six deadly bullets from his government-issue revolver, was to secure the integrity of the pipeline that channels Black males into the prison labor system, as well as to destroy the troublesome and unruly Black excess—or “niggers” as Don Lemon’s National Guardsman would say. These two “incidents”—a century apart—are not anomalies; nor are they disconnected. They are as old as Herod’s order to kill all the boy babies (Matthew 2:16), and as new as the private prison contracts that require that states supply an annual quota of inmates.

The America of Samuel Gompers is the America of Darren Wilson. Both are patriots of an alien civilization of Caucasians that has run its course and has finally earned the wrath of God Himself. The cheap propaganda of “post-racial advancement” and the false euphoria of Black presidential “progress” have been brutally repudiated by the events of recent days. Blacks are fast coming to understand The Honorable Minister Louis Farrakhan, as he admonishes us, encourages us, and implores us “to get up from the feet of our 400-year oppressors, unite, pool our resources and do something for self.” That is pure wisdom. All that we see proves such wisdom to be truth!

(Visit the Nation of Islam Research Group online at https://noirg.org and join the conversation on FaceBook.com/NOIResearch and Twitter @ NOIResearch.)