One of the most profitable revenue streams of white wealth is the Black behavior of unrestrained consumerism. When Blacks expend their entire paychecks on the goods and services of white businesses, they are seen as fulfilling their proper role in the American economy.

The Honorable Minister Louis Farrakhan gave an excellent exegesis on the root of our spending behaviors in Part 31 of his landmark series The Time and What Must Be Done. It is absolutely critical in laying a thoughtful foundation for the work that Black people must do to correct our current condition. Let us examine the powerful points he made.

Forty-two million Blacks have a spending power amounting to $1.1 trillion, which gives each man, woman, and child an annual spending power of $26,200. But all this and more  gets funneled to some very happy white retailers of various products and services. Among those questionable, even profligate, annual expenditures are:

The profits to whites are so incredibly lucrative that ANY Black leader that seeks to address this injustice is considered radical, un-American, and even “anti-Semitic.” How did Blacks get to become the greatest consumer people in American history? Is it in our genetic coding; in our DNA?

The answer is in our experience in slavery and then the sharecropping system that followed. When most Blacks emerged from slavery, it frightened the hell out of white people. They knew that money and knowledge in Black hands meant that Blacks would have the power to determine their own destiny apart from white domination and control. The first impulse Blacks had after slavery was to get as far away from whites as possible. They even set up over 60 all-Black towns, in which they managed free of white authority. This trend had to be stopped because with Black independence came the total loss of the labor  that whites totally depended on.

So there were specific provisions in the Jim Crow laws and customs that gave whites the right to just take money away from Black people at will. If Blacks tried to save and invest their earnings, their money would be confiscated. One state decreed that having “one-eighth or more of negro blood” was adequate cause to void contracts. Banks that were set up to encourage savings among the ex-slaves—like the Freedmen’s Bank or the Moses Bank—collected millions from Black depositors and then closed their doors, leaving Black depositors with nothing and no recourse.

Laws invalidating “negro testimony” effectively made it IMPOSSIBLE for Blacks to use the court system for any justice at all. A white man could walk into the home of a Black family and take whatever he wanted—including their cotton or corn harvest, along with the daughter and wife—and a Black man had no legal recourse.

Blacks responded to this oppression by becoming fast spenders. They knew that if they could quickly turn their meager pay into some commodity, they had a better chance of seeing value from their wages. They couldn’t trust banks to hold it; and because of the Jim Crow laws, the possession of money by Blacks was actually seen as evidence of criminality. All of that legal wickedness drove us to the over-priced country store merchants (mostly immigrant Jews) as soon as we received our pay on Friday. One Jewish man spoke the prevailing white sentiment when he maintained that Blacks “needed money no more than turtles.”

White people used to watch this behavior and mock us for it. According to one man quoted in The Secret Relationship Between Blacks and Jews, Vol. 2:

“The chief customers are the negroes, who delight in spending their money as soon as they get it, and who are not particular as to the quality or quantity or price of the article they wish to purchase…”

There was no “delight” about it. We wanted to use our money wisely but the racist system punished us when we did. Our response to this wickedness was logical even wise at that time, but it set in motion a damaging spend-it-as-you-get-it mindset that continues to this day.

So, today, Blacks don’t trust banks, or the courts—we “trust” only that which we can hold in our hands at that very moment. As destructive as that behavior is to Black progress is exactly how profitable that behavior is to whites—who will do anything to keep us thinking exactly as we do. 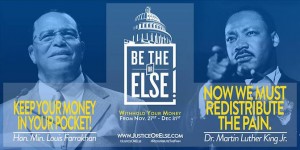