Can ANYONE Tell the Difference? 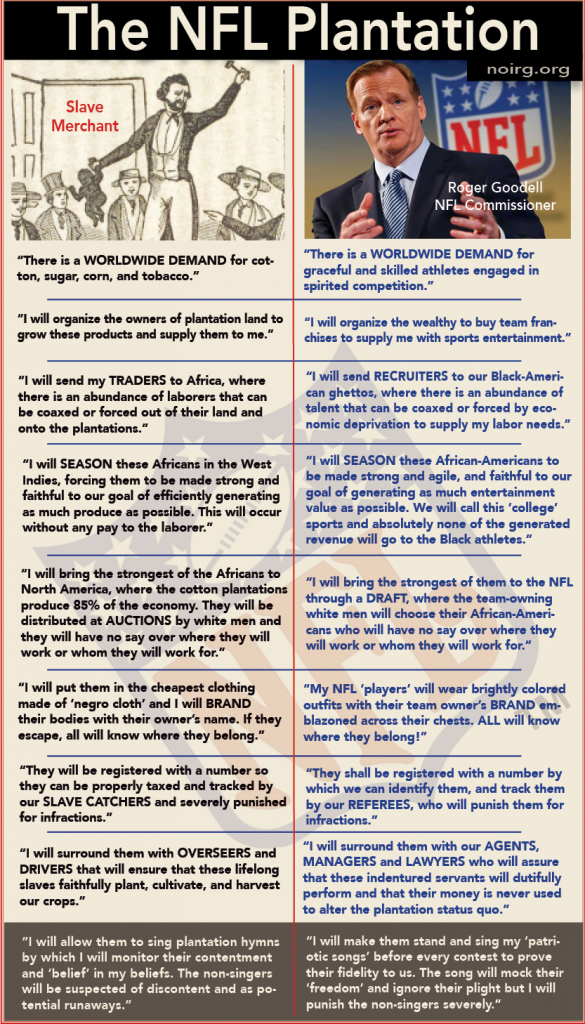 Slave Merchant: “There is a WORLDWIDE DEMAND for cotton, sugar, corn, and tobacco.”

NFL: “There is a WORLDWIDE DEMAND for graceful and skilled athletes engaged in spirited competition.”

Slave Merchant: “I will organize the owners of plantation land to grow these products and supply them to me.”

NFL: “I will organize the wealthy to buy team franchises to supply me with sports entertainment.”

Slave Merchant: “I will send my TRADERS to Africa, where there is an abundance of laborers that can be coaxed or forced out of their land and onto the plantations.”

NFL: “I will send RECRUITERS to our Black-American ghettos, where there is an abundance of talent that can be coaxed or forced by economic deprivation to supply my labor needs.”

Slave Merchant: “I will SEASON these Africans in the West Indies, forcing them to be made strong and faithful to our goal of efficiently generating as much produce as possible. This will occur without any pay to the laborer.”

NFL: “I will SEASON these African-Americans to be made strong and agile, and faithful to our goal of generating as much entertainment value as possible. We will call this ‘college’ sports and absolutely none of the generated revenue will go to the Black athletes.”

Slave Merchant: “I will bring the strongest of the Africans to North America, where the cotton plantations produce 85% of the economy. They will be distributed at AUCTIONS by white men and they will have no say over where they will work or whom they will work for.”

NFL: “I will bring the strongest of them to the NFL through a DRAFT, where the team-owning white men will choose their African-Americans who will have no say over where they will work or whom they will work for.”

Slave Merchant: “I will put them in the cheapest clothing made of ‘negro cloth’ and I will BRAND their bodies with their owner’s name. If they escape, all will know where they belong.”

NFL: “My NFL ‘players’ will wear brightly colored outfits with their team owner’s BRAND emblazoned across their chests. ALL will know where they belong!”

Slave Merchant: “They will be registered with a number so they can be properly taxed and tracked by our SLAVE CATCHERS and severely punished for infractions.”

NFL: “They shall be registered with a number by which we can identify them, and track them by our REFEREES, who will punish them for infractions.”

Slave Merchant: “I will surround them with OVERSEERS and DRIVERS that will ensure that these lifelong slaves faithfully plant, cultivate, and harvest our crops.”

NFL: “I will surround them with our AGENTS, MANAGERS and LAWYERS who will assure that these indentured servants will dutifully perform and that their money is never used to alter the plantation status quo.”

Slave Merchant: “I will allow them to sing plantation hymns by which I will monitor their contentment and ‘belief’ in my beliefs. The non-singers will be suspected of discontent and as potential runaways.”

NFL: “I will make them stand and sing my ‘patriotic songs’ before every contest to prove their fidelity to us. The song will mock their ‘freedom’ and ignore their plight but I will punish the non-singers severely.”