In 2016, the Nation of Islam Research Group asked the distinguished scholar Dr. James Fetzer to respond to the ADL’s attack on The Honorable Minister Louis Farrakhan. Dr. Fetzer is a former U.S. Marine, professor, and founder of Scholars for 9/11 Truth.

Note: View Dr. Fetzer’s excellent analysis of the recent False Flag “chemical attack” in Syria. He provides a cascade of damning facts about the event and comments on the Trump administration’s internal conflicts (Dr. Fetzer starts at 3:04).

Dr. Fetzer, Is the Honorable Minister Louis Farrakhan accurately reflecting the doubts many have about 9/11? He said:

“I watched in horror that morning seeing planes fly into the Twin Towers; and afterwards, I saw the Twin Towers fall down—like a building imploding (fell right down in its own tracks).  But nothing happened to Building 7 until that evening!  And then Building 7 went down (40 stories high).  All three Buildings went….But there were those on the scene who heard explosions! … Twenty-nine hundred (2,900) people from different parts of the world lost their lives—policemen lost their lives, firemen lost their lives, EMT[s] lost their lives; and many people died afterward just from inhaling the dust….and George Bush was in Florida in a school, reading a book to babies.”

A:   Yes. How could two planes take down three buildings? WTC-7 was not hit by any plane and had no jet-fuel-initiated fires. No steel structure high-rise has ever collapsed from fire before 9/11 or after 9/11—and it did not happen on 9/11 either, where the Twin Towers now appear to have been taken out by a sophisticated arrangement or mini or micro nukes and WTC-7 by a classic controlled demolition. This was a very carefully planned event. 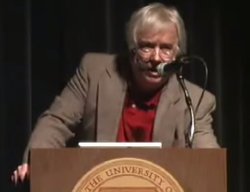 A:  No, 9/11 was brought to us compliments of the CIA, the Neo-Cons in the Department of Defense and the Mossad. Neither Osama nor the 19 alleged “suicide hijackers” had anything to do with it. As David Ray Griffin makes as the first point of his THE 9/11 COMMISSION REPORT: OMISSIONS AND DISTORTIONS, a half-dozen or more of them turned up alive and well the following day and were interviewed by UK media.

Q: Dr. Fetzer, What is the best evidence you can present that ties the Israelis directly to the 9/11 incident?

A: In “The Real Deal Ep #103 9/11: Who was responsible and why” with Denni Cimino,  https://www.youtube.com/watch?v=yR87VIaL0sw we present proof of Israeli and Zionist involvement from the security at the airports to the World Trade Center and the role of ICTS, Urban Moving Systems, Odigo Messaging Service, The New York Port Authority and many others involved in setting the 9/11 stage and carrying it out.

Q: Has your research uncovered any evidence of foreknowledge by anyone of the 9/11 incident?

Yes: the Gomel Chesed Cemetery incident and the warning given to [San Francisco mayor] Willie Brown by [national security adviser] Condoleezza Rice (that he should not fly on 9/11) are only a few. An elderly woman from Brooklyn called me years ago and told me that her Rabbi had warned the members of the synagogue not to go into lower Manhattan that day. For more, see “Israel did 9/11: All the proof in the world”, http://theinfounderground.com/smf/index.php?topic=5367.0

Q: Is the Honorable Minister Louis Farrakhan accurately presenting the facts when he said:

[Paul] Wolfowitz had 10 years, now, to plan how they’re gonna clean out The Middle East and take over those Muslim nations.  They needed another “Pearl Harbor”:  They needed some event, that was cataclysmic, that would make the American people “Rise Up!” ready for war.  So they plotted, for 10 years—this “Project For A New America Century”:  [They] tried to put it in the Clinton Administration.  [Bill] Clinton refused. But George W. Bush was agreeable.  In those 10 years, they plotted a false-flag operation…

A:  Yes. The plan appears to have originated in the fertile mind of Benjamin Netanyahu, who wanted to devise a plan to draw the United States into a war with the Arab nations that served as a counter-balance to Israel’s domination of the Middle East. He held a conference in Jerusalem and published TERRORISM: HOW THE WEST CAN WIN (1987) before the word was in common use. PNAC was the think tank to formulate how it could be done.

Q: What is the motive of the 9/11 perpetrators?

A: To transform American foreign policy from one in which, at least officially, the US never attacked any nation that had not attacked us first to one in which we became the world’s greatest aggressor nation—and at the same time to introduce legislation (The PATRIOT ACT) that would reorganize the government along the lines of a fascist, military state.   The US has turned into a national security surveillance state as a consequence of 9/11.

Q: What are the implications, from your perspective, if the American/world public comes to believe that Israel was involved (planned and carried out) the 9/11 attacks?

A: Americans are very gullible and believe what they are told by the government and the mass media. Israel possesses a massive stockpile of nuclear, chemical and biological weapons of mass destruction, which are undeclared. US guidelines preclude sending foreign aid to a nation with undeclared WMDs. The realization that Israel nuked the US on 9/11 might bring about a change in the public’s attitude and diminish our unqualified support for Israel.

Q: Dr. Fetzer, The ADL has been particularly vicious in labeling “anti-Semites” all those who press for answers—including yourself and The Honorable Minister Louis Farrakhan. What is their motive and how do you see the ADL’s role in this 9/11 tragedy?

A: The ADL has been doing its best to abuse its position by attacking those of us who are doing what we can to bring the truth to the American people and to the world more generally. I was among four “Anti-Semitic 9/11 Conspiracy Theorists” the ADL attacked. Ironically, the passages cited from my article, “Is 9/11 research ‘anti-Semitic’?”, demonstrated that there was nothing anti-Semitic about 9/11 research.

Jim Fetzer, a former Marine Corps officer, has published widely on the theoretical foundations of scientific knowledge, computer science, artificial intelligence, cognitive science, and evolution and mentality. A magna cum laude graduate of Princeton who majored in philosophy, he earned his Ph.D. in the history and philosophy of science. He has received many awards and forms of recognition for his teaching and scholarship. McKnight Professor Emeritus at the University of Minnesota Duluth, he has also conducted extensive research into the assassination of JFK, the events of 9/11, and the plane crash that killed US Sen. Paul Wellstone. The founder of Scholars for 9/11 Truth, he has authored The Evolution of Intelligence (2005), The 9/11 Conspiracy (2007), Render Unto Darwin (2007), and The Place of Probability in Science (2010). His latest, Nobody Died at Sandy Hook (2015) and And Nobody Died in Boston, Either (2016), are available at  http://moonrockbooks.com. His radio show, “The Real Deal”, has now gone video with MBC, M/W/F from 8-10 PM/ET. He also does “The Raw Deal” on renseradio.com T/Th from 8-9 PM/ET. For more on his research, see “James Henry Fetzer – Wikipedia the free encyclopedia BUSTED!”