According to Senator Bernie Sanders, “One family, the Walton family of Walmart, owns more wealth than the bottom 40 percent of Americans.” Wal-Mart Stores, Inc., is the nation’s (and the world’s) largest commercial employer and one of America’s most profitable companies, netting $15.7 billion in profits in 2011 from $419 billion in annual global sales. For the fiscal year ended January 31, 2015, Walmart increased net sales by 1.9% to $482.2 billion. 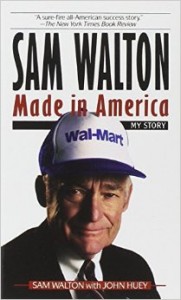 We have found Santa. And he is Wal-Mart. To the consumer, Walmart, like Santa Claus, provides a lot of gifts—at “low” prices, of course—but as a worldwide purchaser, Walmart is a “Mr. Scrooge” that cuts its suppliers and workers down to the bone. We know that Santa is a big fat lie. We now also know that Wal-Mart is a big fat liar. In its beginning Walmart suckered Americans into its stores by advertising that its products were “Made in America”—Walmart’s founder, Sam Walton, wrote a book with that same title. Just this year Wal-Mart was forced to remove “Made in the USA” logos from its e-commerce site after an inquiry by the Federal Trade Commission into the company’s labeling. This summer, watchdog group Truth in Advertising said it found on Walmart’s website more than 100 examples of items labeled with a “Made in the U.S.A.” logo that misled consumers.

In her 2012 article “NOT Made in America: Top 10 Ways Walmart Destroys US Manufacturing Jobs,” Amy Traub describes the many negative impacts that Wal-Mart has exacted on the American worker. The vast majority of merchandise Wal-Mart sells in the U.S. is manufactured abroad. Although Wal-Mart imports from Bangladesh, Honduras, Cambodia, and a host of other countries, it boasts of not only direct relationships with nearly 20,000 Chinese suppliers but also purchases of $27 billion worth of Chinese-made goods in 2006. According to the Economic Policy Institute, Wal-Mart’s trade with China alone eliminated 133,000 U.S. manufacturing jobs between 2001 and 2006. And though it is the largest private employer in the U.S., Walmart accounted for 11.2 percent of the nation’s total job loss. 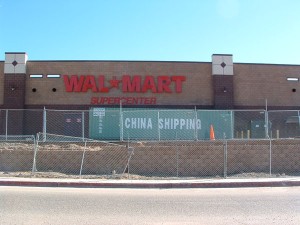 Walmart is big and fat. With $482.2 billion in annual net sales in 2014, Wal-Mart’s market power is so immense that even the largest suppliers must comply with its demands for lower and lower prices. Companies that used to manufacture products in the United States, from Levi’s jeans to lock maker Master Lock, were pressured to shut their U.S. factories and move manufacturing abroad to meet Wal-Mart’s demand for low prices.

Walmart was the proud leader in sourcing goods overseas. While Wal-Mart still imports disproportionately more goods than other apparel retailers, its commercial innovations accelerated the use of offshore suppliers by its competitors, speeding the loss of American manufacturing jobs.

Even when Walmart products are made in the United States, manufacturing jobs still get eliminated as suppliers cut costs to meet Wal-Mart’s demands for low prices. A Wal-Mart spokesperson admitted that this was the point of the company’s efforts to buy domestic goods: “one of our big objectives was to put the heat on American manufacturers to lower prices.” To comply, Wal-Mart’s domestic suppliers lower wages, cut benefits, aggressively fight employee efforts to unionize and bargain collectively, and skimp on worker comfort and safety.

Wal-Mart’s unrelenting push for low prices eats into the profit margins of its U.S. suppliers, often weakening companies in the process: of the top ten companies supplying Wal-Mart in 1994, four sought bankruptcy protection by 2006.

If other big box chain stores like Target and Kmart want to remain competitive with Walmart, they must demand similarly low prices from suppliers. As a result, the pressures pushing down costs and propelling the elimination of American manufacturing jobs are magnified. 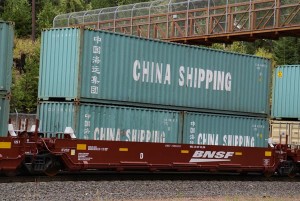 According to the non-profit Center for Responsive Politics, Wal-Mart spent $7.8 million on lobbying in 2011 alone. In 2012, according to the Huffington Post, Wal-Mart spent a staggering $8.68 million on lobbying expenses. “In addition to buying lobbyists, Wal-Mart also makes corporate contributions to presidential and Congressional candidates: $9.5 million between 2000 and 2012.” For years Wal-Mart has lobbied to make it easier to push American jobs out of the country, playing a key role in lobbying for NAFTA in the early 1990s.

According to Al Norman in his 2004 book The Case Against Wal-Mart, “Since 1962, the Wal-Mart dust machine has been grinding through retailers in every state in the country. Wal-Mart has cannibalized the retail food chain from the Mom and Pops on the bottom, to the mid-level regional chains, to the very top national chains.” As a result, in the decade between 1992 and 2002, the grocery industry lost 13,000 stores, or 17% of the industry.

Grocery stores were not the only victims of Wal-Mart’s “dust machine.” In March of 2002, Kmart imploded, shutting down 271 discount stores and 12 supercenters. The loss of these 283 stores across 40 states and Puerto Rico resulted in the loss of 22,000 jobs—thanks, Santa.

So now it takes a Black man, a child of slavery, who has suffered from the “460-year white boycott” against Black people to step in with a solution to save the American worker, White and Black. Boycott Walmart and the other big chain stores this Christmas. They don’t buy from America anymore, anyway.

While White people in America have been so busy watching, boycotting, and jailing Black people, a handful of their own white brethren have ripped them off. Although presidential candidates talk about “rebuilding America,” it is evident that our Black youth had better take their future into their own hands and be guided by someone who is not afraid of talking truth to power—the Honorable Minister Louis Farrakhan. Minister Farrakhan has called for a boycott of these big white chains and a redistribution of our dollars back into the Black community.

When we vote for a politician, we do not know what he will do once he gets in office; however, when we vote with our dollars, we can control the flow of power.

“When a dollar enters a community and is then spent outside the community, its benefit is felt only once. If that same dollar is respent within the community, its benefit is multiplied: it adds more value, pays more wages, finances more investments, and ultimately creates more jobs. Thanks to this ‘multiplier effect,’ each additional transaction in which the dollar is involved creates just as much wealth as a new dollar from the outside, but relies on local decisions made by people who care about the community.”

Minister Farrakhan cares about our community. So let us follow his advice and boycott Santa, i.e. Walmart and friends—and give Christmas back to Jesus. As Minister Farrakhan says, “Up with Jesus, Down with Santa.” Bring America’s jobs back to the “hood.” Instead of spending your hard-earned cash with these big white chains to buy foreign-made toys for your child to enjoy for a day, invest that money in yourself or through a collective development effort such as the Muhammad Economic Blueprint. Build a future for our children and break those chains.

Dr. Ridgely A. Mu’min Muhammad, Ph.D., is an Agricultural Economist and a member of the Nation of Islam Research Group. Visit them online at https://noirg.org and join the conversation on FaceBook.com/NOIResearch and Twitter @ NOIResearch.