“On April 2, 1936, in a letter to some of his ministers, the Most Honorable Elijah Muhammad wrote:

‘History, of all our studies, is most attractive and best qualified to reward our research, as it develops the springs and motives of human actions and displays the consequences of circumstances which operate most powerfully on the destinies of human beings. It stands true that we, the Lost Found Nation of Islam, in the wilderness of North America, have not applied ourselves to the study of history, but rather to folly.’ ”

In 1983, the Honorable Minister Louis Farrakhan became the target of the organized Jewish leadership, which launched a blistering flurry of racist attacks and threats of death against him and his supporters. Not since the days when the Ku Klux Klan held sway had the white world attacked Blacks so bitterly. Jews charged “anti-Semitism” but that turned out to be a smokescreen for their real motive in singling out Farrakhan. The Minister’s close alliance with the presidential candidate Jesse Jackson was thought by Jews to be a threat to the cozy American–Israeli friendship that had colonized the Middle East. Despite the Jewish leadership’s obvious, ham-handed ploy, Min. Farrakhan responded in the most intelligent manner: He sent his scholars into the libraries to help the people understand the history of the very people that had—in the twinkling of an eye—turned from Blacks’ “best friends” into their most vicious enemy.

That research shocked the learned leadership of both peoples. The Secret Relationship Between Blacks & Jews plumbed the depths of ancient and obscure Jewish records, manuscripts, unpublished scholarship, rabbinical writings, and archival texts to expose a sinister side of Jewish history the Jewish people had steadfastly denied. Nation of Islam (NOI) scholars proved that Jews had never been “friends” of the Black man and woman. In fact, they were deeply involved in the four-century trade in kidnapped Africans and all aspects of the worldwide marketing of the products derived from the Africans’ enslavement. And after the Emancipation Proclamation Jewish merchants continued that pattern of exploitation of the Black ex-slave, playing a key role as architects of sharecropping and Jim Crow and even supporting America’s notorious terrorists, the Ku Klux Klan.

Before the NOI published its research, Jewish historians sounded much like Jewish Labor Committee executive director Emanuel Muravchik did in his 1963 comments:

From the turn of the century there has been awareness on the part of the more enlightened and politically advanced on both groups that they share a common problem as discriminated-against minorities in the United States and in the Western world.

Fairytales like this have disappeared from Jewish rhetoric, as the NOI exposé was quietly placed in the collections of the most prestigious libraries around the world, including Yale, Harvard, Princeton, Brandeis, Yeshiva, Brown, Stanford, as well as universities in England, Germany, and New Zealand—all have the Nation of Islam books on their shelves. Some of them require special permission to view the volumes. They would never admit it, but The Secret Relationship Between Blacks and Jews has drastically altered the writing of Jewish history ever since its initial publication in 1991. 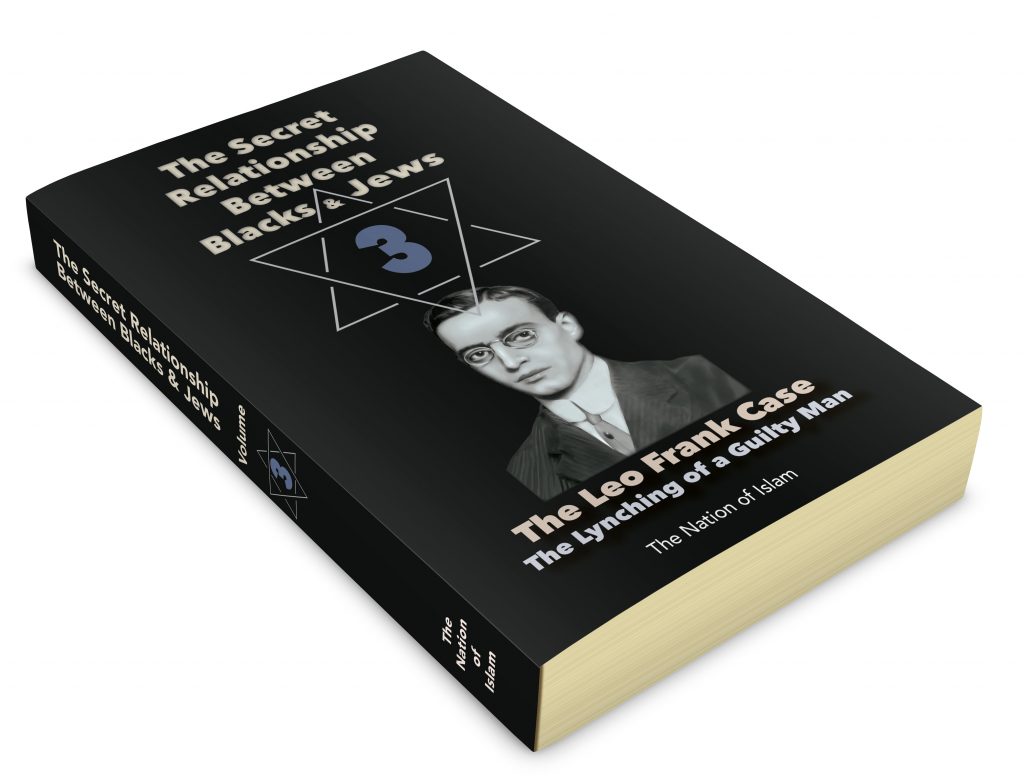 And now the Nation of Islam has released The Secret Relationship Between Blacks and Jews, Volume 3. The hefty 536-page document focuses entirely on one case of deep significance to the Jewish people: The Leo Frank Case of 1913–1915. In its international impact the Leo Frank case was very much like the O.J. Simpson case a century later. And its profound significance to American race relations makes it essential to understanding American Jews and the mentality that drives their behavior vis-à-vis Blacks in America. 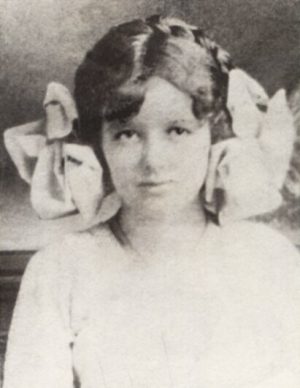 Though it is almost entirely unknown to the masses of Black people, Jews have persuaded the Black learned to accept that this one case, The Leo Frank Case, is the greatest single act of anti-Semitism in American history—a catastrophic miscarriage of justice that regenerated the Ku Klux Klan, launched the Anti-Defamation League of B’nai B’rith, and birthed the modern Civil Rights Movement. It is also the point in time when, Jews insist, their history in America must begin. Before the Leo Frank Affair, Jews treated Blacks as slaves; after, Jews claimed they were the Black man’s “best friend.” So who is this Leo Frank?

Leo Frank was the president of the Atlanta chapter of the powerful and secretive Jewish organization B’nai B’rith, and thus he was arguably the most powerful Jewish leader in the American South. He also ran a pencil factory in Atlanta, where he employed white child laborers and Blacks in menial positions. A 13-year-old factory worker named Mary Phagan—who made 7¢ an hour operating the machine that attached erasers to pencils—was told to come to Frank’s office on a holiday to collect her $1.20 pay and it was the last time she was seen alive. Her body, discarded in the factory’s basement, was discovered the following day by the factory’s Black night watchman. Frank was arrested on suspicion of having raped and murdered the girl, a crime that inflamed Georgians, who followed every detail on the front pages of Atlanta’s three daily newspapers. 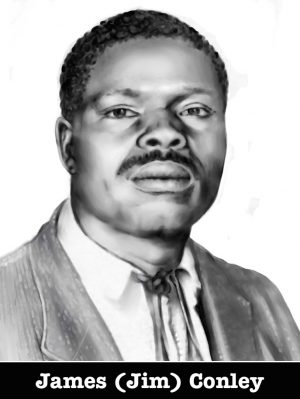 Then, several weeks before Frank’s murder trial, a Black janitor at the factory named James Conley divulged a shocking secret. He claimed that he was in the factory on the day of the murder and that Leo Frank had called on him to move the body of Mary Phagan to the basement after Frank’s attempt to rape the young girl had gone terribly wrong. Conley openly accused this powerful Jewish leader of murdering a young Gentile white girl. Frank, in turn, charged that James Conley was the real murderer. Never before in a Southern courtroom had a Black man’s word been accepted as evidence against a white man’s, yet the white prosecutor, the white judge, and the all-white jury believed the Black factory sweeper. Ultimately, on August 17th in 1915, after many legal appeals and a worldwide campaign for his freedom, whites stormed the prison where Leo Frank was being held and lynched him in the murdered girl’s hometown.

The prosecution and murder of Leo Frank are considered the worst act of “anti-Semitism” in American history. No other example exists that so publicly pitted Jews and Gentiles in a test of wills, like the Leo Frank case. And Jews practically demand that the outside world investigate the case to draw an accurate portrait of the American Jewish identity—that is, how they have suffered and overcome racial and religious persecution. At this very moment in 2016, the Museum of Jewish Heritage in Manhattan is hosting an exhibit titled Seeking Justice: The Leo Frank Case Revisited so that all the world will come to understand the plight of Jews through Leo Frank’s eyes and experience.

In 2015, Jonathan Greenblatt, the newly appointed National Director of the Anti-Defamation League, chose the 100th anniversary of Frank’s lynching (August 17, 1915) to announce a major national initiative against anti-Semitism, and in his remarks Greenblatt invoked the name of Leo Frank multiple times. Without question, the case is the central pillar of Jewish American identity. 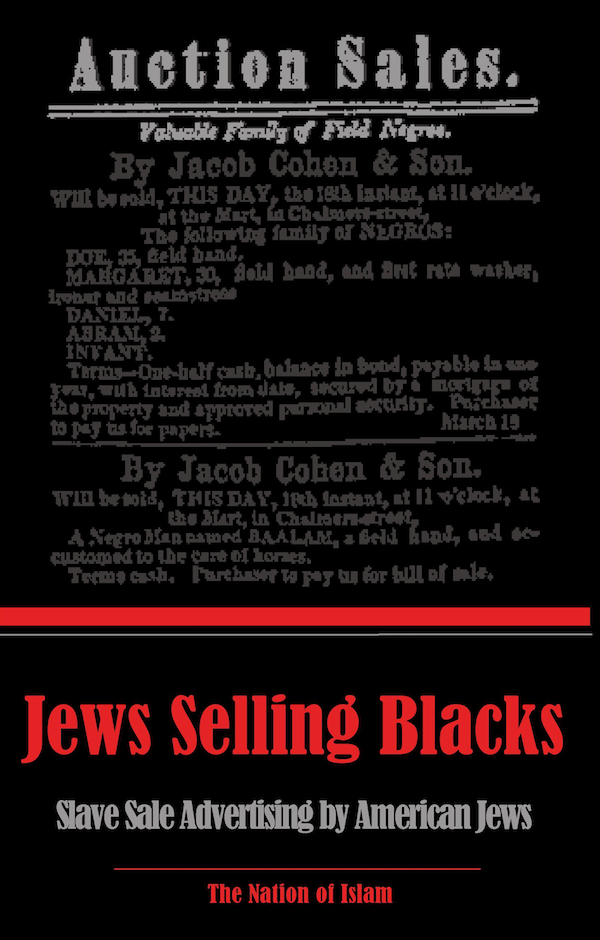 Jews Selling Blacks is the largest collection of Jewish slave-sale ads ever published. These Jews WANTED to let the world know about their marketing of human beings.

The Jewish demand that scholars focus on this case leads to an unanticipated treasure trove of unexplored records and documents that unlock the most confidential operations of the Jews’ highest leadership circles. As the Jewish people united in the international fight to overturn Leo Frank’s murder conviction, considerable data about their activities leaked into the public record—information so extensive and so revealing that its very existence is unique in the annals of Jewish history. The Leo Frank case offers a rare window into the thinking and strategizing of the leaders of the Jewish people.

Moreover, the passionate, century-long Jewish effort to clear Frank’s name paralleled an equally vicious attempt to pin the murder of Mary Phagan on the Black witness James Conley. The racist ruthlessness of that Jewish effort is laid bare through a massive cache of documents that tell a sordid tale of purchased testimony, the planting of evidence, racial scapegoating, extreme expressions of racism, financial manipulations, bribery, retaliation, threats to witnesses, and even attempted murder. The case is further marred by the academic world’s willful concealment of this damning evidence, a deception that continues to this very moment—until now.

The Secret Relationship Between Blacks and Jews, Volume Three, is also available as a Kindle e-book at Amazon.com. In it readers will find the clearest evidence ever presented concerning the crime of the century—and come to the inescapable conclusion that Leo Max Frank was in fact guilty of the murder of Mary Phagan. With graphics, maps, diagrams, photos, charts, and tables, the reader will trace the details of the case that all previous books have concealed. Not only is the identity of Mary Phagan’s murderer finally established as the leader of Atlanta’s B’nai B’rith, but justice is given to the many Blacks and Whites who testified against Leo Frank, as well as to the white judge, jury, prosecutors, and police officers, all of whom are viewed as instigators of an “anti-Semitic conspiracy.” In addition, the extraordinary operations of America’s Jewish leadership are brought to light.

For serious students of the Black–Jewish relationship who demand uncompromising truth, the third volume of the NOI’s 1,500-page series is not to be missed.

For serious students of the Black–Jewish relationship who demand uncompromising truth.

Available Here: Books that will Change Your Mind:

The Hidden History of Washington, DC — $10

The Hidden History of Massachusetts — $10

How White Folks Got So Rich: The Untold Story of American White Supremacy — $8