The Honorable Minister Louis Farrakhan lectured at Rutgers University in New Jersey on Nov. 19, 2016. His subject was “The Legacy of Brother Paul Robeson,” and a Final Call newspaper article can be found here:

At the question and answer portion a Muslim women asked The Minister about the issue of SHIRK (See the definition at the end). Here is a transcript of this interesting exchange:

Sister: This is the first time I[’ve] actually been to one of your speeches, Minister Farrakhan. Very good information, all the knowledge—I was very appreciative—you definitely [live] up to the standards that I hear about you. But more [of] an educational question, one in particular that I just found a little confusing: …well, my question is…What is the one thing that Allah will not forgive?

Min. Farrakhan: They say it is shirk.

Min. Farrakhan: And putting up with God that which is unworthy to be worshiped.

Sister: So the term, well, the terminology “direct descendants of God” does that contradict that?

Min Farrakhan: No. Have you read, in the Quran, my sister, when Allah intervenes in the affairs of men? He says in the Quran, “It was not you who slayed them; it was I who slayed them by your hand.” When the Prophet (PBUH) received the revelation of the Quran, he didn’t see Allah—he saw Jabril, an angel, in the form of a man. They say he looked in four directions and that image was there of a man. In the Hadith, a man dressed in white came to the Prophet and he was asking questions of the Prophet. And when the Prophet answered the questions and left, he said to his companions, Do you know who that was? And they said, no. And the Prophet said, That was Jabril.

In the Quran, in the third Surah, when Allah and the angels said to Mary, she’s going to have a child and his name would be the Messiah, worthy of regard in this world and in the hereafter. And she said, How can I have a child—a man has not yet touched me. Allah says, It is easy for Him. He just says, kun fayakun, Be! And it is. And then in another part of the Quran, talking of Mary, it says, Allah sent His spirit to her, and it appeared unto her in the form of a well-made man.

Whose spirit was in that well-made man? It was Allah’s spirit. So Allah works through human beings. He never sent angels to us if we’re not angels. He sent a human to us. All His prophets were human beings. And the Messiah, and the Mahdi that the Islamic world is looking for, is a human being. 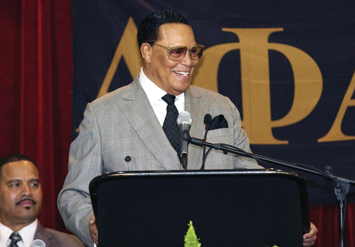 So what happens to us is that we become very spooky. We live in a physical universe. Look at this universe, created by Allah. It’s not spooky, it’s not spirit—it’s material. And you and I come physically from this earth. So all of the chemistry of the earth is in us.

So in the second Surah (Al-Baqarah – The Cow) of the Quran, Allah says, “I am going to place a ruler in the earth.” And the angels said, What will you place in it, but that which will create mischief and cause the shedding of blood. And that that he placed in the earth is called Khalifa. You know what Khalifa means, my sister? It means one who stands in the place of another, in the absence of that one, or in the death of that one. That is what a khalifa is.

So you and I, we are to be the Khalifa of God. We stand in His place. We are to rule according to His guidance and wisdom. And the more humble we are in submitting our will to do His will, He empowers us with the anointing of His spirit. (Applause.)

Now, you cannot worship Al Mahdi because he is anointed with the power of God: You worship Allah. And this is the thing that has touched my heart in the prayer that Master Fard Muhammad wanted us to say in the morning: “Surely I have turned myself to Thee, oh Allah, being upright to Him Who originated the heavens and the earth.”

The Originator of the heavens and the earth is not physically here, but we are. And he has set this universe on an evolutionary course toward perfection. And we are in that age now when the human being will be perfected, to represent God Himself as His Khalifa.

So, my dear family, that was a great question. Now plumb the depth of it. ’Cause if I were guilty of shirk—I just want to close with this—I would be worthy of the chastisement of Allah. But he blesses me so much in the face of all my enemies. And those of you who have been to Mecca with me: in truth they treated me in Mecca, like a rock star. The young people, like you, they broke down the barriers.

I was sitting where the Kings sit. I didn’t sit myself there—they sat me there. You know why? Because they don’t have nobody that has the courage to stand against the wickedness of America but Louis Farrakhan. He is the Muhammad Ali in the spiritual world. Nobody! Thank you for listening. Allahu Akbar!

The Holy Quran condemns SHIRK as an unpardonable sin, as in Chapter 4 Al-Nisa, The Women:
48 Surely Allah does not forgive that a partner should be set up with Him, and forgives all besides that to whom He pleases. And whoever sets up a partner with Allah, he devises indeed a great sin.
Maulana Muhammad Ali’s footnote 48 explains:
Holy Shirk or setting up partners with Allah is spoken of as the gravest sin. Wrong belief in false deities lowers the dignity of man. Man is made to rule nature itself and all creatures, but when he lowers himself before creatures lower than himself, he sets at naught the very purpose of his creation. It should be noted that shirk or setting up gods with God also includes blind obedience rendered to leaders; see 9:31 and also the next footnote. It should also be noted that if a person guilty of shirk repents of it before his death then all his sins including shirk are forgiven because he gives a new turn to his life. Even those who die while guilty of shirk will, after suffering the consequences of their deeds in the after life, be received into the mercy of God.