Whereas, on the twenty-second day of September, in the year of our Lord one thousand eight hundred and sixty-two, a proclamation was issued by the President of the United States, containing, among other things, the following, to wit:

That on the first day of January, in the year of our Lord one thousand eight hundred and sixty-three, all persons held as slaves within any State or designated part of a State, the people whereof shall then be in rebellion against the United States, shall be then, thenceforward, and forever free;

ONLY THE SLAVES OF “REBELLIOUS” STATES ARE ADDRESSED. AT THIS TIME IN HISTORY, LINCOLN ACTUALLY HAS NO AUTHORITY OVER THESE SLAVES OR THOSE STATES. THEY ARE NOW THE CONFEDERATE STATES OF AMERICA WITH AN ALTOGETHER DIFFERENT PRESIDENT.

…and the Executive Government of the United States, including the military and naval authority thereof, will recognize and maintain the freedom of such persons, and will do no act or acts to repress such persons, or any of them, in any efforts they may make for their actual freedom.

THE TERM “ACTUAL FREEDOM” IS SUSPECT, AND APPEARS TO MEAN THAT “EFFORTS” MUST BE MADE IN ADDITION TO THE PROCLAMATION.

NO MAGNANIMITY HERE. LINCOLN WANTS ALL TO KNOW THAT THERE IS NO LOVE FOR BLACKS AND THAT IT IS ENTIRELY A WAR MEASURE – NOT AN EQUALITY MEASURE.

…do, on this first day of January, in the year of our Lord one thousand eight hundred and sixty-three, and in accordance with my purpose so to do publicly proclaimed for the full period of one hundred days, from the day first above mentioned, order and designate as the States and parts of States

NOTICE THE TERM “PARTS OF STATES.”

WHY THESE EXCEPTIONS? THEY ARE AREAS NOT REBELLING AND IN COMMAND BY UNION (LINCOLN’S) FORCES AND THUS THEY ARE PERMITTED TO MAINTAIN BLACK SLAVERY.

…and which excepted parts, are for the present, left precisely as if this proclamation were not issued.

IN OTHER WORDS, WITHOUT ANY EFFECT ON SLAVERY.

And by virtue of the power, and for the purpose aforesaid, I do order and declare that all persons held as slaves within said designated States, and parts of States, are, and henceforward shall be free; and that the Executive government of the United States, including the military and naval authorities thereof, will recognize and maintain the freedom of said persons.

And I hereby enjoin upon the people so declared to be free to abstain from all violence,

…unless in necessary self-defence; and I recommend to them that, in all cases when allowed, they labor faithfully for reasonable wages.

“WHEN ALLOWED”? ARE BLACKS FREE ONLY TO LABOR FOR OTHERS? AND THIS LEAVES THE POWER IN THE HANDS OF THE REBEL SLAVEOWNERS. WHO IS EXPECTED TO DO THE “ALLOWING” BUT THE SLAVEMASTER, WHOM LINCOLN “ALLOWS” TO STAY IN COMMAND. INDEED, THE EMANCIPATION PROCLAMATION DOES NOT TOUCH ANY OF THE SLAVEHOLDER’S ASSETS—HIS LAND, HIS PLANTATIONS, HIS EQUIPMENT, HIS INFRASTRUCTURE—ALL REMAIN IN HIS HANDS.

And I further declare and make known, that such persons of suitable condition, will be received into the armed service of the United States to garrison forts, positions, stations, and other places, and to man vessels of all sorts in said service.

BLACKS ARE STRONGLY STEERED BY LINCOLN TO GO IMMEDIATELY INTO THE ARMY. IN OTHER WORDS, FREED FROM THE SOUTH TO SLAVE FOR THE NORTH. A “FREE” PEOPLE ARE JUST THAT — FREE; FREE TO FARM,  ESTABLISH HOMES, BUSINESSES, INSTITUTIONS AND COMMUNITIES, OWN LAND, BUILD FACTORIES, ENGAGE IN INTERNATIONAL COMMERCE. THE E.P. CONDITIONS THE “FREEDOM” OF THE SLAVES TO A SINGLE ROLE OF MILITARY SERVICE.

And upon this act, sincerely believed to be an act of justice, warranted by the Constitution, upon military necessity, I invoke the considerate judgment of mankind, and the gracious favor of Almighty God.

GOD HAS NOTHING TO DO WITH THIS.

In witness whereof, I have hereunto set my hand and caused the seal of the United States to be affixed.

Done at the City of Washington, this first day of January, in the year of our Lord one thousand eight hundred and sixty three, and of the Independence of the United States of America the eighty-seventh.

By the President: ABRAHAM LINCOLN

BLACKS WERE NOT TECHNICALLY FREED UNTIL THE ENACTMENT OF THE 13TH AMMENDMENT, WHICH, BY ITS WORDING, ESTABLISHES ANOTHER FORM OF SLAVERY IN THE FORM OF INCARCERATION. 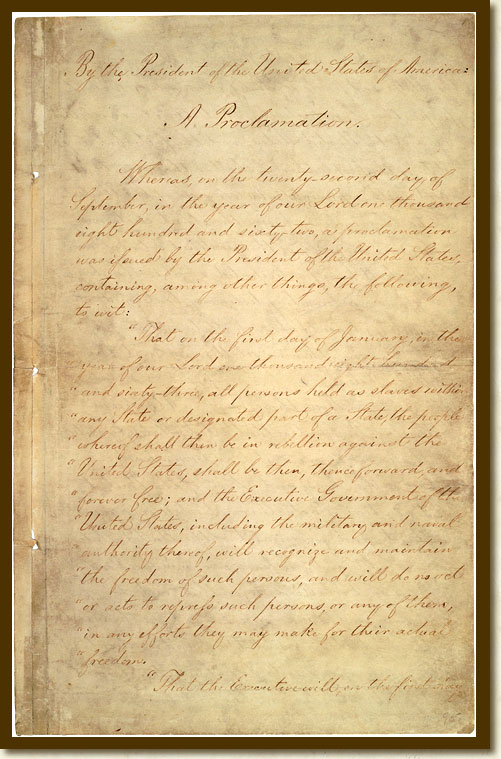