The racial history of Georgia is fraught with blood-curdling violence and the utter extremes of white supremacy. Native genocide, African slavery, sharecropping, Jim Crow, lynching, KKK terrorism, and state-sponsored oppression were not only practiced there—they are at the existential root of Georgia itself. Black people can safely say the state motto—“Wisdom, Justice, Moderation”—is hypocrisy.

Jewish people claim that they shared victimhood with Blacks throughout Georgia history. But in order to make that claim they ignore the extensive Jewish slave trading, such as that of Leah Minis, who was publicly advertising “Sundry Negro Slaves in families” in 1795, or that of Israel Keiffer, who in 1781 was selling “some Negroes, Cattle, and Household furniture,” “property” of the late co-religionist Solomon Zantz. They must ignore the mass Jewish exodus from Georgia in 1740, which occurred not to escape some anti-Semitic violence but, according to Rabbi Dr. Jacob Rader Marcus, to protest that “Negro slavery was prohibited, the liquor traffic was forbidden.” You read right. When Georgia decided to ban slavery, the Jews booked it to find a slave state. They only returned when African slavery was reinstated nine years later.

To make the case that they have kinship with Blacks in suffering the worst of white American racism, Jews point to a single event—the 1915 lynching of the convicted murderer of a young gentile girl, Jewish leader Leo Frank, who was killed after being snatched from a Georgia prison cell. Based on this one event Jews have claimed a historical oppression equal to that of Blacks, and Leo Frank has been given a sacred martyrdom status in the history of Jews in the Black civil rights movement. 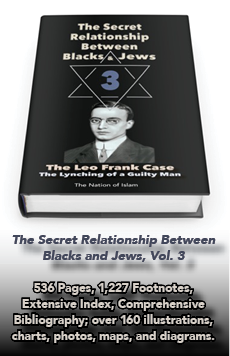 A new book by the Nation of Islam delves deeply into the Leo Frank case to meticulously examine this little-known history. Of the dozen or more books and thousands of articles written about this most significant case, it turns out that, strangely, none of those studies are by Black scholars. And the Jewish writers have routinely evaded the extraordinary involvement of Blacks in the case and how they were used and abused in the legal process that led to Leo Frank’s murder conviction. The 536-page book on the Leo Frank case by the Nation of Islam is titled The Secret Relationship Between Blacks and Jews, Vol. 3, The Leo Frank Case, and it reveals in graphic detail that the B’nai B’rith leader Leo Frank and his Jewish supporters were no civil rights crusaders: they were staunch proponents of white supremacy and true believers in the racist status quo. 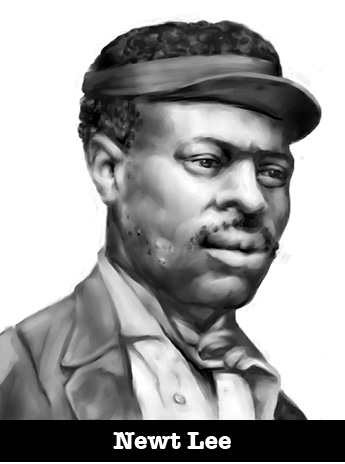 The trial of Leo Frank for the murder of 13-year-old Mary Phagan was a veritable cesspool of racism—not by the Georgia prosecutors of Leo Frank, but by Leo Frank and his hired defense team! One of the ugliest examples of Jewish racism commenced just hours after the murder. The man who discovered the body in the basement of Leo Frank’s pencil factory was Leo Frank’s employee, the Black night watchman named Newt Lee. Though it was Lee who alerted police to the grisly scene in the early morning hours of April 27th 1913, the police immediately arrested and jailed him, for no other reason than the arrest of the nearest Black person was a long-established American tradition.

But Frank also found himself under suspicion after police noticed that he was unusually nervous and trembling and that the statements he gave to investigators were, to them, less than candid.  One of scores of child employees at the factory, Mary Phagan had come to meet Frank to get her pay, and he admitted to being the last person to see her alive. Leo Frank sensed that police had their suspicions of him, but as the leader of Atlanta’s B’nai B’rith organization he had the wealth and connections to obtain the most expensive lawyers and private investigators. And once his legal team was assembled, they seem to have been working zealously and illegally to deflect suspicion away from their client Leo Frank. 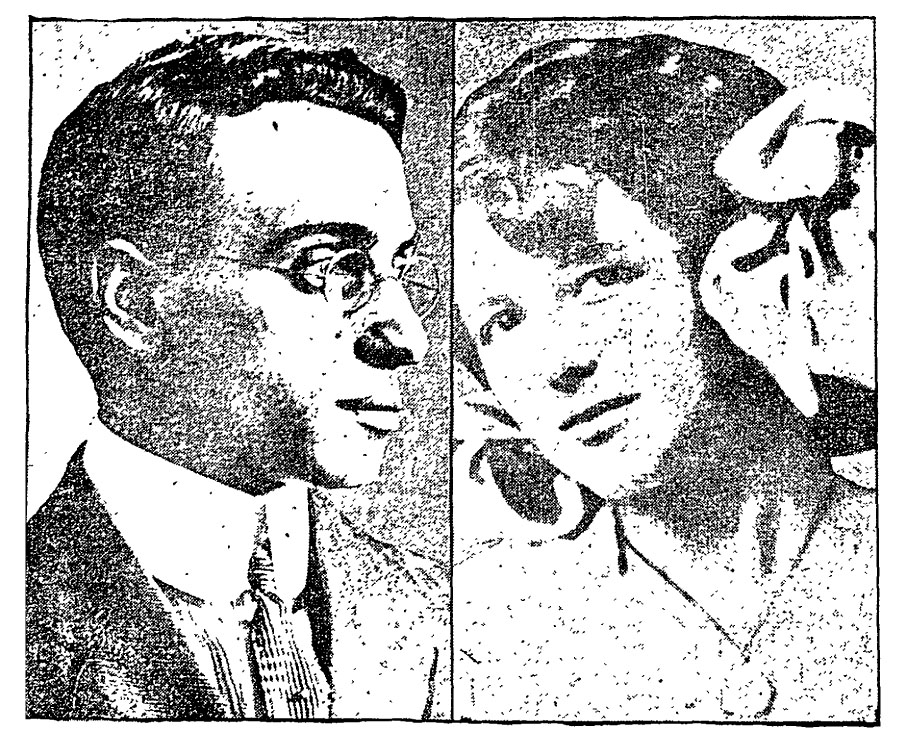 While Newt Lee sat chained in jail, and with the newspapers stoking a lynch-mob fervor against him, someone broke into Lee’s home, found a shirt of his, smeared it with blood, and placed it in his clothes hamper. At the very same time, Frank’s lawyer and fellow B’nai B’rith member Herbert Haas was “informing” police where they might be able to find that damning “evidence” against Lee. But Haas handled his part of the “frame-up” so poorly that police immediately suspected the bloody shirt to be “planted” evidence. The shirt appeared newly washed and not to have been worn at all, and it had been smeared with blood as if someone had used it to wipe a table. Worse, police confirmed that Lee, who was then sitting handcuffed in jail, was still wearing the shirt he had on on the day of the murder.

Further tying this botched scheme to Leo Frank was the simultaneous discovery that Frank had altered his night watchman’s factory timecard to indicate that Lee could have committed the crime. The front page of the April 30th edition (“Extra No. 8”) of the Georgian is titled “SUSPICION LIFTS FROM FRANK; MAY BE FREED,” and quotes detectives: “We now have enough evidence to convict Newt Lee.” Most troubling is the following passage:

“Additional clews furnished by the head of the pencil factory were responsible for the closing net around the negro watchman…what suspicion had rested on Frank was being rapidly swept away by the damaging evidence against the black man. It was announced that he [Frank] probably would be liberated tonight or in the morning.”

Atlanta Chief of Detectives Newport Lanford declared to reporters that somebody was “blocking the Phagan investigation, silencing witnesses, and ‘planting’ evidence.” Chief Lanford understood—as did everyone else following the sensational case—that only one person, Leo Frank, could benefit from these actions against the poor Black night watchman. And it was only Frank who had the resources to mount such an operation.

Frank’s botched attempt to frame his Black employee was actually the final straw for police, who then concluded that Leo Frank was the likely murderer. They arrested him, and a grand jury with five Jewish members indicted Frank for the murder of Mary Phagan. The “bloody shirt” incident came up at the trial and was one of the strongest pieces of evidence presented by the prosecution. 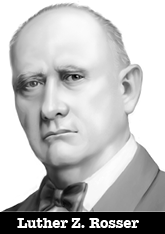 Tampering with, falsifying, and altering evidence are bad enough—indeed, they are all felonies—but when confronted with their crimes at his trial, Frank’s team doubled down and dove even deeper into the mud. His main trial attorney was the South’s premier advocate, the famed Luther Rosser, and in open court he had this incredible exchange with an expert witness who testified that the bloody shirt had indeed been planted at Newt Lee’s home:

Rosser: The shirt had the odor of blood on it when you first got it, didn’t it?

Rosser: Then, if a nigger had just put on his shirt and had taken it off in an instant, your nose would “get him”?

A. Have you ever smelled a negro, Mr. Rosser?

Rosser: More than you ever smelled. I was smelling them before you were born.

Jewish civil rights icon Leo Frank sat nodding approvingly at his attorney’s cross-examination prowess. For, though Rosser was no closer to rebutting the damning evidence against his client for the serious crimes of rape and murder, he had indeed established himself as the resident authority on the smell of niggers. And so a budding Black-Jewish relationship, which could have held out the promise of equal opportunity, racial brotherhood, and civil rights, collapsed like a 9-11 controlled demolition. 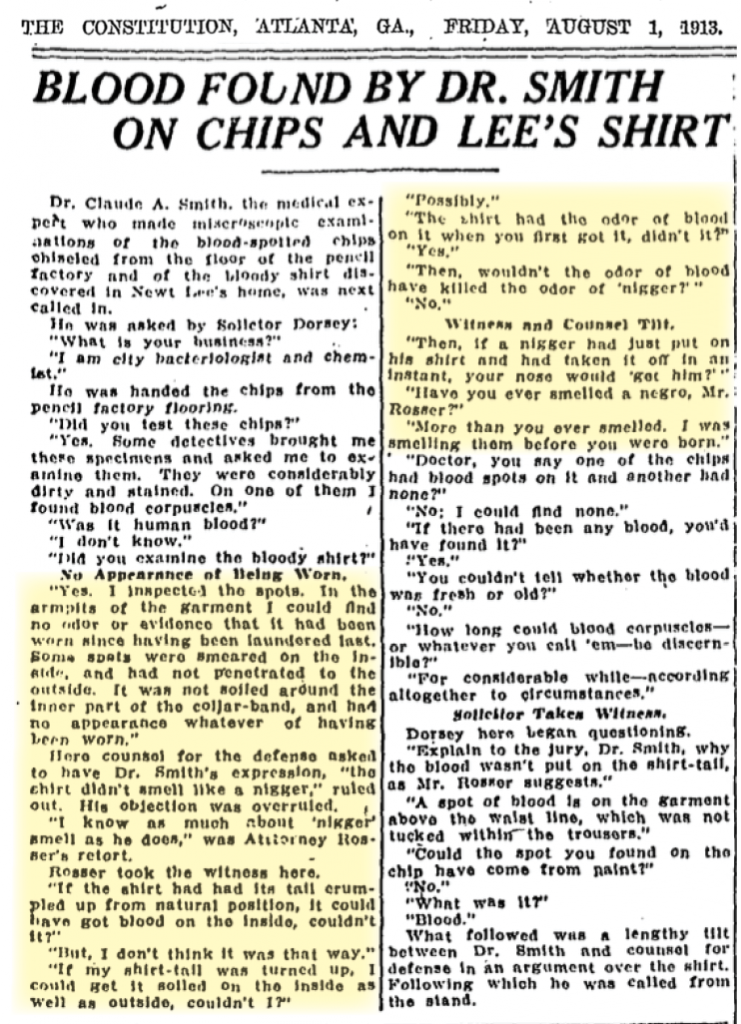 Notwithstanding this bizarre and grotesque trial tactic, Newt Lee testified in such a strong, truthful, and dignified manner that even the all-white jury could not be convinced that Lee had committed any crime at all. But that did not deter the Frank team, which argued in court that Lee, and the many Black witnesses that testified, should not be believed—simply because they were Black. “Negro testimony,” they insisted, was by definition inferior and unreliable. Further, Frank advanced the notion to the court that murder, rape, and robbery were “negro crimes” and thus by definition a white man (like him) could not have committed the murder of Mary Phagan. 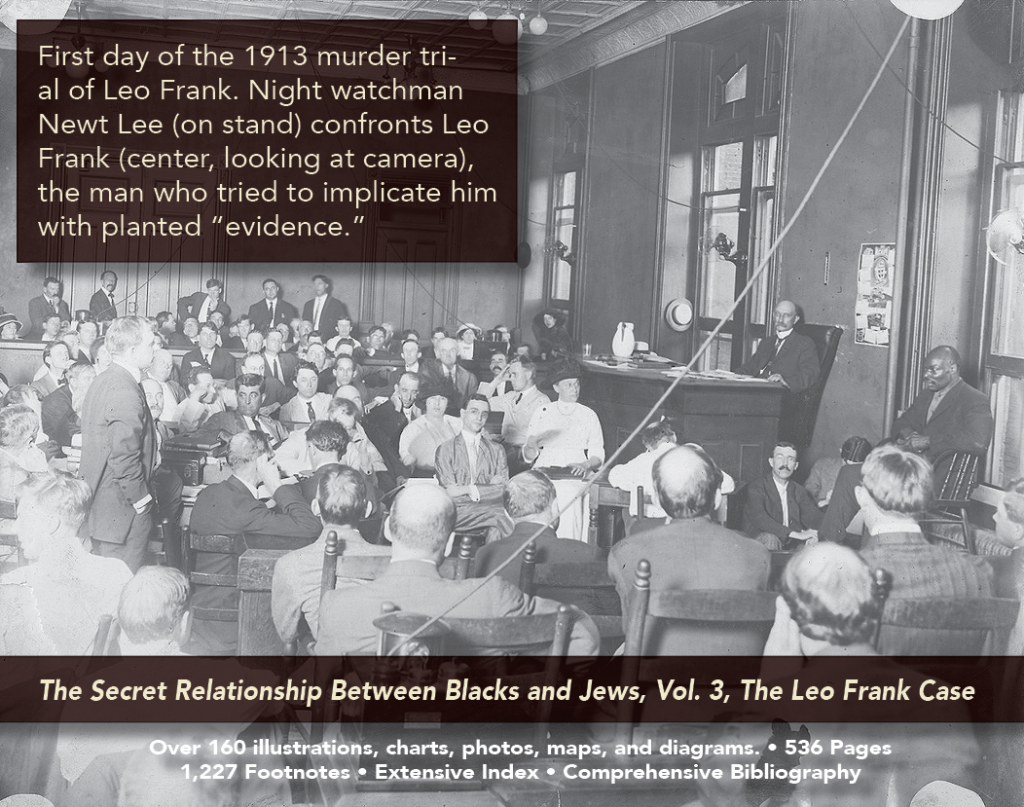 Of course, had the Georgia prosecutors pursued an “odor of Jew/Jew testimony/Jewish crime” attack against Frank, such an outrage would ring from every American history book as the very best proof of American “anti-Semitism” in its rudest form. Instead, Leo Frank—a Jewish racist—is “credited” with being the founding father of  the Anti-Defamation League and the Black-Jewish relationship.

Today, of the many studies of the case, all have concealed the anti-Black racism of Leo Frank and his supporters. Journalist Steve Oney is the ADL expert on the case. He penned a book of 742 pages yet avoids this “smell-of-nigger” exchange altogether. A stage play by Alfred Uhry titled Parade, which is now touring America, ignores and whitewashes these seedy features of Leo Frank’s alleged civil rights résumé.

All of this hidden history is revealed in unprecedented detail in the pages of The Secret Relationship Between Blacks and Jews, Volume 3. What’s more, the attempted framing of a Black man—a framing that Leo Frank had hoped would result in the innocent man’s lynching—is just one of many incidents of racism committed by Leo Frank and his representatives as he tried desperately to free himself from the charge of rape and murder, at the expense of an innocent Black life.

The Jewish role in the early civil rights movement has always been taken for granted as having a strong foundation in truth. Now that Black scholars have conducted a rigorous investigation of the Leo Frank case, the Jewish role in the Black struggle must be seriously revisited, uncovered, and exposed.

See the banned video at https://www.bitchute.com/video/lcUuo9tS2swE/