“A lie can travel halfway around the world before the truth can get its boots on.”

32-year-old star American swimmer Ryan Lochte is the quintessential frat boy. Anyone who has ever been on a white university campus on a weekend is well familiar with the type: a win (or a loss) in a university sports event is followed by drunken “keggers,” then overturned police vehicles set afire, and no arrests.

Olympian Lochte and three of his boys went out in Rio, but unlike the rest of the 11,000 athletes at the games they couldn’t hold their urine and chose to get violent about it. They vandalized a gas station bathroom, ripped down a poster, and urinated on the sidewalk. They were confronted by a security guard to answer for their behavior, but the four men claimed they were the victims of a robbery.

Ryan Lochte booked it out of Rio, leaving co-urinators Gunnar Bentz, Jack Conger, and James Feigen to deal with the public outrage. Back in America the lawyered-up Lochte was given a prime-time opportunity by NBC’s Matt Lauer to press some pre-scripted terms into the American psyche: Lochte was surprisingly consistent, five times saying he “over-exaggerated,” five times saying he “was intoxicated,” five times saying he was “held at gunpoint,” and five times blaming “my immature ‘tantics.’” NBC is hypersensitive to this lying-vandal scandal since former anchorman Brian Williams was able to con the entire network news division with alarming ease. 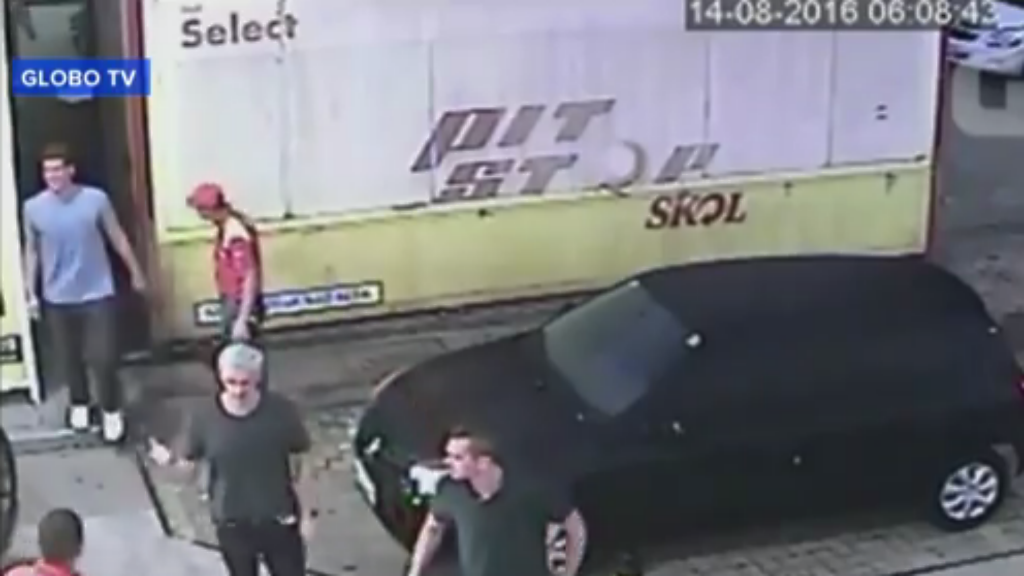 Lauer’s 14-minute interview is hard to watch. With his lawyers, agents, and “crisis managers” just off-camera Lauer easily made the 32-year-old “kid” admit that he was engaged not in a robbery but in a “negotiation” with the actual victim to avoid his own prosecution. Lochte mouthed contrition but still angled to maintain his white victimhood.

Economic Impact of an Ugly American

Lauer showed concern for Lochte’s potential loss of his current endorsement deals with Speedo, Airweave, Mutual of Omaha, Gillette, Gatorade, and Polo Ralph Lauren, contracts that are said to be worth up to $3 million. But nobody seems to be asking what the lying, scheming white-privileged Lochte and his frat boys have cost Rio and Brazil?

Eleven thousand visiting athletes heard of an alarming robbery of an American gold medalist accosted by police-badge-waving bandits. Yahoo sports reporter Eric Adelson is typical of the uncritical and unquestioning American “journalists” who couldn’t wait to break the “news”:

The most pressing risk facing these Olympics never was Zika, according to many experts. It was local crime. And Sunday’s scare involving American swimmer Ryan Lochte provided more proof. 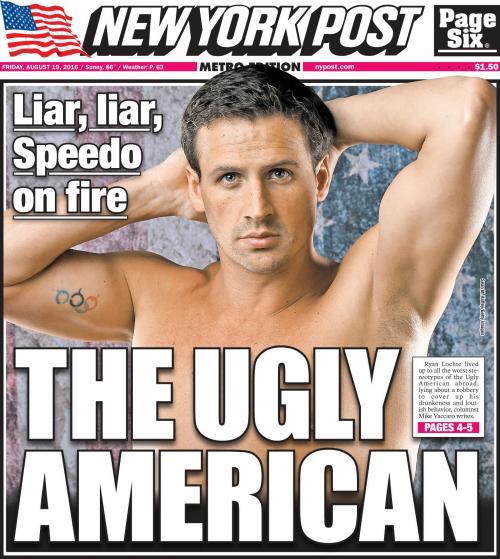 Each of those 11,000 athletes had family and friends who made the trip with them with loads of cash and credit cards. The Brazilian Tourist Institute estimated that half a million tourists would travel to the country during the 16-day Olympic Games. They projected that each would spend about $1,300 at the 20,000 businesses in Rio de Janeiro, such as its hotels, bars, restaurants, and nightclubs. With that $650 million they would also rent cars, bikes, mopeds, and hire taxis and tour buses to see the world-famous beaches, landscapes, museums, monuments, and other attractions. And they would tip waiters, waitresses, hotel maids, doormen, and taxi drivers. They would attend and spend at fairs, bazaars, carnivals, and the unending Olympic parties. After all the negativity heaped upon Brazil—ranging from Zika, water pollution, terrorism, to street crime—all of those Rio businesses looked forward to changing that image for the better.

And herein lies the damage of Ryan Lochte’s perniciously crafted Big White Lie. How many of those 500,000 tourists fearing a similar fate chose to forgo their planned activities? Even if they feared falling victim to Rio crime, certainly a taxi ride to and fro would safeguard their lives and their wallets. But Lochte located his fake crime in a taxi to ensure that even this safest form of travel was perceived to be fraught with mortal danger. He even gave his “robbers” police badges to ensure that even the Rio police couldn’t be trusted! Then, before he skipped town, he got his dear old mother to spread his lies:

“I think they’re all shaken up,” Ileana Lochte told USA Today. “There were a few of them … They were just, they just took their wallets…”

How many Rio visitors chose to leave Brazil early once they believed that the entire multibillion-dollar Olympic security operation was not bulletproof? Lochte certainly hightailed it out of town. Given its precision targeting of every tourist’s fear, it is hard to believe that this perfectly framed hoax could be the work of a drunken frat boy. The losses to the Brazilian economy and to the people of Brazil may have reached into the tens of millions of dollars. A foreign enemy plotting economic sabotage could not have inflicted a more devastating injury than Lochte has wreaked on Brazil.

And yet self-absorbed Americans seem more worried about Lochte’s endorsement losses—not Brazil’s reputational and economic losses. As of today, Speedo, Gentle Hair Removal, Airweave, and Polo Ralph Lauren have cut their ties with this ambassador of white privilege. Lochte and his cohorts most certainly should be extradited and fully prosecuted for their false report of a crime and their destruction of property, both of which carry penalties of up to six months in jail and a fine.

But what does the American treasury owe the people of Brazil? There is a price tag—a dollar figure—for Lochte’s American lies. His “immature ‘tantics’” were so readily enabled and widely spread by the white American media that they too share in the responsibility. These ugly Americans have tapped into a historical resentment felt by all of South America, the consequences of which no mere apology can account for or assuage. How America—not Lochte—handles its responsibility to the people of Brazil is really what the world is waiting to see.