The Atlantic Magazine’s Jewish editor Jeffrey Goldberg has posted an article that details the Jewish role in Black slavery. He confirms that Minister Louis Farrakhan is correct in the assertion that Jews “frequently dominated” the slave trade. The article by John-Paul Pagano was posted on The Atlantic website and contains the following reference material: 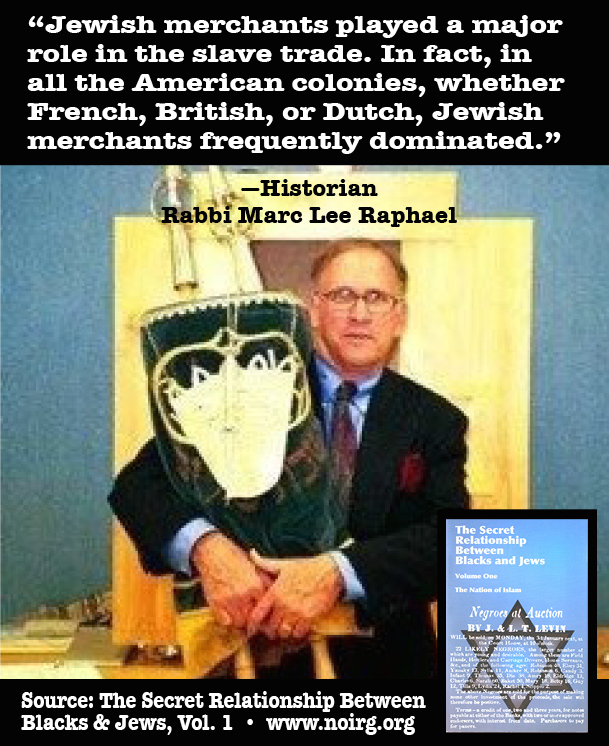 “…. During slavery, Jews were slave masters, slave traders, merchants, peddlers, and state[s]men. In general, Jews were everything in the Old South except abolitionists…“

Goldberg once Interviewed Min. @LouisFarrakhan for FOUR hours, leaving their meeting “fighting himself over how impressed he was.” Apparently, he was so impressed that he finally had to acknowledge that Minister Farrakhan was RIGHT about the Jewish role in Black oppression. See below:

The Atlantic article says this about
Jews and Black Slavery:

“Black and Jewish race relations within America were a microcosm of the greater Black-White race problem beginning in the Colonial Period. The initial Jewish contact with Blacks was an extension of the Dutch Slave Trade in which the Dutch tried desperately to eliminate “Jews and Jobbers” from the Slave Trade. Jewish history in America shows that Jews played an active role in the institution of slavery. Almost from the beginning there were Jewish slaveholders in New Amsterdam [New York]. Rhode Island history shows that Aaron Lopez and Jacob Rivera, refugees from the Spanish Inquisition, were well-known slave traders of colonial Newport. For the most part Jews in the North adopted the prevailing patterns of the people in the North. When slavery died out in the North so did Jewish participation in the institution. 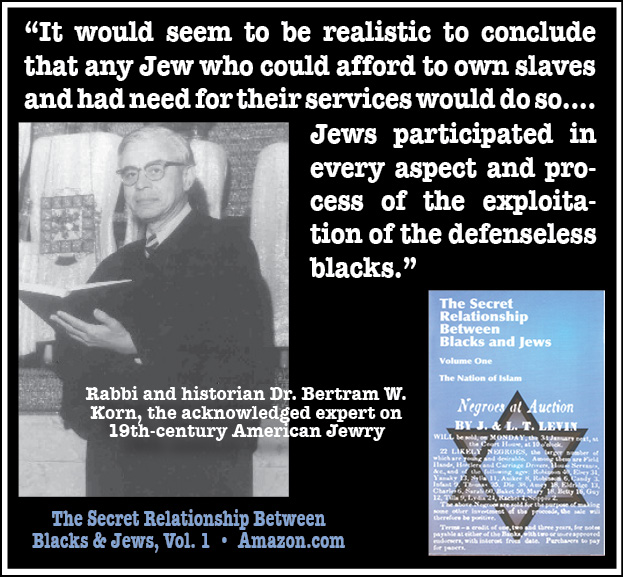 “As a group, Jews did not adopt a position toward slavery in the manner which Quakers made their position clear. When the abolition movement surfaced the Jewish community remained aloof and took no concerted stand on the issue.

“The majority of Black and Jewish contacts in Colonial America was in the southern Colonies, especially South Carolina and Georgia….Jews, as a result, were quite prominent in this colony [South Carolina] as well as Georgia. This fact did not cause Jews to treat Blacks any better than other colonial Whites. As historians Bertram Korn and Jacob R. Marcus indicated, the Jewish treatment toward Blacks did not differ from their fellow white Gentiles.

“The presence of the southern Jews complemented the system of slavery; their mercantilistic interest made slavery a more effective labor system. While most Jews were not to be found on plantations, their activities made the plantation a self-sufficient unit. What was not produced on the plantation was delivered by Jewish merchants. The southern Jew had as much, if not more, to gain by maintaining the system of slavery as any other white segment within the South. During the Civil War Jews defended the system which insured them acceptance and success in the South. Neither the Civil War nor Reconstruction changed the southern Jews’ perception of Blacks as an animal to be used and exploited.

“The belief that Jews were superior to Blacks was not alien to Jewish circles. An article in a Jewish newspaper in 1863 illustrated that some Jews had a strong leaning in the direction of white supremacy: 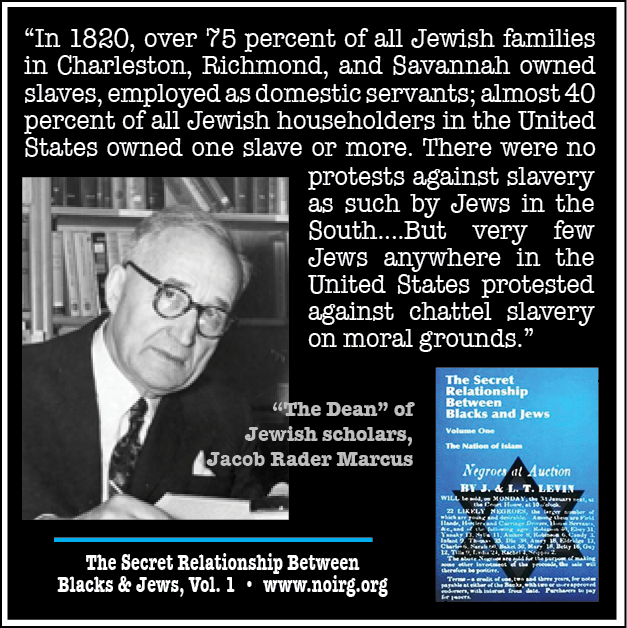 ‘We know not how to speak in the same breath of the Negro and the Israelite. The very names have startling opposite sounds—one representing all that is debased and inferior in the hopeless barbarity and heathenism of six thousand years; the other, the days when Jehovah conferred on our fathers the glorious equality which led the Eternal to converse with them and allow them to enjoy the communion of angels. Thus the abandoned fanatics insult the choice of God himself in endeavoring to reverse the inferiority which He stamped on the African to make him compeer even in bondage of His chosen people. There is no parallel between such races…The judicious in all the earth agree that to proclaim the African equal to the surrounding races would be a farce which would lead the civilized conservatives of the world to denounce this outrage.’

“The above blunt opinion reflected Jewish sentiment about Blacks after slavery ended.

‘Probably in no other region of the United States have Jews been so integrated with the general population or subject to less discrimination. Most came into the South after a period of assimilation in the North. They were welcomed because of their business connection which fitted in well with the philosophy of the New South as they quickly occupied an impartial position in the retail dry-good business.’

“Often in the New South, success of Jewish merchants depended upon winning Black trade. Jewish merchants appeared more courteous…than fellow white merchants. Blacks were often the victims of sales pressure when Jews refused to accept no-sale for an answer. …. ‘Jewing Down’…. The Jewish merchant received his desired price and the naïve Black went away with the over-priced goods.”

[end of excerpt from The Atlantic]

—From “Historical Impressions of Black-Jewish Relations prior to World War II,” in Strangers & Neighbors: Relations between Blacks & Jews in the United States, edited by Maurianne Adams and John Bracey (Amherst: Univ. of Mass. Press, 1999), pp. 34-36.

The statement above on the Jewish involvement in Black slavery and Black oppression was presented by Jeffrey Goldberg, editor of the Atlantic Magazine. The Honorable Minister Louis Farrakhan has presented precisely the SAME history and yet he is called “anti-Semitic.”