Donald Trump said on Saturday, November 21st: “I watched in Jersey City, N.J., where thousands and thousands of people were cheering as that building was coming down.” The building he was talking about was the World Trade Center. Then Trump labeled these people as Muslims. Wow! What a perfect example of how a big fat lie spreads much faster than the truth.

Still, this 9/11 lie does show us the long-term value of false flag operations: they have the ability to target an entire group or country for destruction. Trump is using this story about the “thousands” that were “celebrating” 9/11 as fuel to ignite Islamaphobia and justify the surveillance of Mosques all across America in search of “radical Muslims.” The presidential candidate said, “I want surveillance of certain Mosques.” Who does he think he is, Santa Claus checking who’s been naughty and who’s been nice? 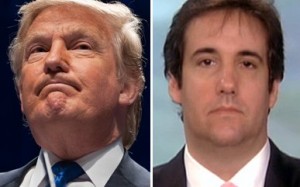 Trump’s chief counsel, Michael Cohen, stood by the comments, even as he was pressed by CNN’s Chris Cuomo on the fact that there’s no evidence to back up the claims.

“He’s probably right,” Cohen said of Trump, on the “New Day” television show. “There’s no way to say that it wasn’t.” Cohen said the argument over the number of people celebrating is misplaced, and that Trump was making a broader point about enemies within the United States.

“Whether it’s thousands and thousands or 1,000 people or even just 1 person, it’s irrelevant. To celebrate this tragedy … it’s wrong,” Cohen said. “What the exact number is, I don’t know, and I don’t think it’s relevant. What’s important is that there are bad people among us.”

Trump and Cohen are mistaken. The exact number of those celebrating the tragedy of 9/11 in New Jersey is 5. Let us now look at the evidence pointing to who these “bad people among us” actually are.

On the morning of 9/11, there were no “thousands” celebrating—only five “dancing Israelis.” Witnesses observed five “dancing Israelis” laughing and congratulating themselves as they filmed the events of that morning from the time of the first plane striking the World Trade Center building #1. In a New Jersey waterfront park facing Manhattan, five Israeli “art students” mounted a video camera poised to film the impact of the first jetliner that slammed into the World Trade Center. They were subsequently seen filming themselves, dressed as Arabs, celebrating when the buildings were hit. They were picked up and detained by police, but quietly released 71 days later and sent back to Israel.

In addition, according to the exposé Made in Israel: 9-11 and the Jewish Plot Against America, by Victor Thorn, prior to September 11, 2001, 140 Israeli nationals were apprehended as part of a massive investigation into an espionage ring that was operating in America. Following the 9/11 attacks, an additional 60 Israelis were detained who had tie-ins with Israel and the September 11th attacks. Made in Israel reports that these Israeli spies were tracking the Muslim “patsies” later blamed for 9/11, along with targeting and penetrating U.S. military bases, the DEA, the FBI, other government facilities, and the private homes of law enforcement officials and intelligence personnel.

What motive would Israel have for spying on its “friend,” America? Mr. Thorn uses the words of Israeli leaders to describe Israel’s motivation for committing such a crime:

A false flag operation, or a big fat lie, goes a long way to “properly reconfigure the American mindset.” After the very successful and spectacular celebration of the 20th Anniversary of the Million Man March on 10-10-15 led by the Honorable Minister Louis Farrakhan, we knew that the enemy was going to negatively respond to the rallying cry of “Justice or Else.”

The Paris killings in the name of “ISIS,” and now the disinformation emanating from the mouth of Donald Trump, let us know that the war against American Muslims and Blacks in general is in full effect. Donald Trump on a national media platform continues to put his foot in his mouth and divide the people of America into two camps: those that love truth and those that want lies.

Dr. Ridgely A. Mu’min Muhammad, Ph.D., is an Agricultural Economist and a member of the Nation of Islam Research Group. Visit them online at https://noirg.org and join the conversation on FaceBook.com/NOIResearch and Twitter @NOIResearch.