To reduce sharply the population of, as by disease, war, or forcible relocation. A reduction over time in a region’s population can be caused by sudden adverse events such as outbursts of infectious disease, famine, and war or by long-term trends, for example sub-replacement fertility, persistently low birth rates, high mortality rates, and continued emigration.

“And now I am speaking for Black America, for Hispanic America, for the Native Americans and for those who are desirous of life. They are making money now, plotting to give 7.5 billion people a vaccination: Dr. Anthony Fauci, Bill and Melinda Gates, you want to depopulate the Earth? “What the hell gives you that right? Who are you to sit down with your billions and talk about who can live and who should die? That is why your world is coming to an end quickly—because you have sentenced billions to death. But God is now sentencing you to the death that you are sentencing to others. …”

“And now I am speaking for Black America, for Hispanic America, for the Native Americans and for those who are desirous of life. They are making money now, plotting to give 7.5 billion people a vaccination: Dr. Anthony Fauci, Bill and Melinda Gates, you want to depopulate the Earth? “What the hell gives you that right? Who are you to sit down with your billions and talk about who can live and who should die? That is why your world is coming to an end quickly—because you have sentenced billions to death. But God is now sentencing you to the death that you are sentencing to others. …”

“They (the white race) are great scientists at tricking the black people. They were created by nature liars and murderers. (As Allah has taught me). They are the first liars and human murderers since the creation of our earth and have sought every evil means to exterminate us from our earth without exterminating themselves. Their entire rule over the Black Nation is a rule of death! They bring suffering and death upon us with a smile! Their show of friendship with you is only false. Both Bible and Holy Qur-an constantly warn us against taking them for friends. History shows that all black people who took them for friends learned later that they had been deceived.”  —The Most Honorable Elijah Muhammad

“How could we let the former colonial and slave master bring in vaccines for our people and we don’t have scientists or laboratories to look at this and test it to see if it is what’s on the label?”   —The Honorable Minister Louis Farrakhan

“Before the vaccine was made, I warned us in the Name of Allah that this was a death plot….The way to get rid of two to three billion people [is] to offer you a vaccine.”

“Now God is going to turn your vaccine into death in a hurry. Mark my words by the Help of God. Since you love to take the vaccine, then eat death…”

“How could we let the former colonial and slave master bring in vaccines for our people and we don’t have scientists or laboratories to look at this and test it to see if it is what’s on the label?”   —The Honorable Minister Louis Farrakhan

On February 25, 2018, The Honorable Minister Louis Farrakhan, leader of the Nation of Islam, spoke to a worldwide audience from Chicago, Illinois. In his now controversial lecture, Minister Farrakhan discussed one of the viciously anti-Christian passages in the Babylonian Talmud, a central text in the Jewish religion. The passage (Gittin 57a) condemns Jesus Christ to an eternal punishment of being “boiled in excrement.” The video clip below is being presented by Fox News and the National Review as a violation of Twitter’s “hate” policy. They are using it to have The Minister’s Twitter account closed down:

The Jewish holy book is the Talmud. Why would they want Jesus to be boiled in hot excrement?

The Nation of Islam Research Group asked Talmudic expert Michael Hoffman to view the clip and give his opinion on the veracity of The Minister’s statement about the Talmud. His response is below:

Farrakhan Spoke the Truth about the Talmud

The Babylonian Talmud tractate Gittin, which Minister Louis Farrakhan quoted truthfully and accurately in his Saviours’ Day speech last February, is concerned in part with the fulfillment of Jesus Christ’s prophecy concerning the destruction of the Temple of Jerusalem by the Romans, due to the transgressions of the Jews:

“Jesus came out from the temple and was going away when His disciples came up to point out the temple buildings to Him. And He said to them, “Do you not see all these things? Truly I say to you, not one stone here will be left upon another, which will not be torn down…Therefore when you see the Abomination Of Desolation which was spoken of through Daniel the prophet, standing in the holy place then those who are in Judea must flee to the mountains” (Matthew 24: 1-2; 15-16).

The “Abomination Of Desolation” was the Roman Army. Jesus was warning that in less than forty years it would advance to besiege Jerusalem, and that His followers were to flee to safety, which is what they did, leaving the unbelieving Jews to suffer the consequences.

Because the creed of Orthodox rabbinic Judaism is one of unrelenting revenge, the Roman General Titus, who personally directed the destruction of the Temple in 70 A.D., is forever an object of hatred, second only to Jesus himself. The rabbis of Orthodox Judaism have never forgiven Titus for commanding the legions who fulfilled Christ’s prophecy and destroyed the Temple at Jerusalem, along with the Jews who maintained that corrupt and doomed system. The revenge of the rabbis upon Titus is to tell nonsensical lies about him in the Talmud. 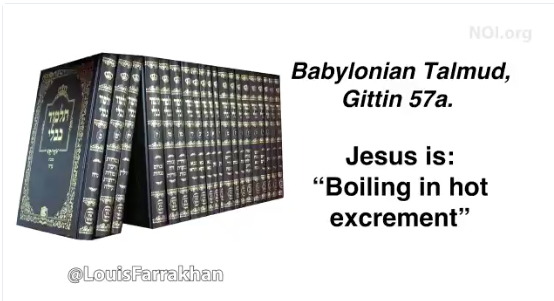 Few Christians or Muslims are aware that in the Babylonian Talmud Jesus shares his place in hell with the Roman Titus, who is depicted as being chastised for the destruction of the Temple by being burned to ashes in hell, reassembled, burned, reassembled and burned again—for eternity (Gittin 56b). In another depraved lie, Jesus is portrayed as being punished for “leading Israel astray” by forever remaining seated in a cauldron of boiling excrement in hell (Gittin 57a). According to the law (halahca) of Talmudic Judaism, “Anyone who mocks the words of the sages will be sentenced to boiling excrement (צוֹאָה רוֹתֵחַת).”

The typical rabbinic and Zionist response to the truthful description by Minister Farrakhan and others of what the Talmud teaches about Jesus, is to lie and say that in this passage the Talmud is referring to “another Jesus,” rather than Jesus of Nazareth: “Many commentaries suggest that some or all talmudic references to Jesus refer to another person” (Koren Talmud Bavli [Jerusalem: 2015], vol. 21, footnote to p. 319).

According to the Anti-Defamation League (ADL), “To agitate Christian readers, anti-Talmud writers often attempt to portray the Talmud as demeaning the figure of Jesus.”

By the ADL’s reasoning, “anti-Talmud writers” are never scholars who are dispassionately committed to the discovery of the truth about what the Talmud teaches, but rather, they are only agitators who, from impure motives, seek to “portray” the Talmud as “demeaning” Jesus.

How the ADL arrived at this conspiracy theory is not revealed, but the undercurrent of intimidation is clear: those who speak or write candidly and accurately concerning how Jesus is defamed in the Talmud are seeking to “agitate Christians.” No reputable person would want a career-killing stigma like that attached to his statements and most Christians and Muslims are thereby intimidated from pursuing the truth about the Talmudic depiction of Jesus. Moreover, according to the ADL, “the Talmud only refers to Jesus in a handful of places, and though these references may not reflect the courteous ecumenicism of the modern world, neither are they particularly inflammatory.” (Anti-Defamation League, The Talmud in Anti-Semitic Polemics [New York: 2003], p. 11).

The ADL expects us to believe that depicting the Christian Savior being boiled in feces is not inflammatory, while any critical observation that Mr. Farrakhan dares to utter concerning Judaism is nothing but inflammatory. The hypocrisy is all too familiar.

Long-standing denials by Talmudists and Zionists and their gentile apologists concerning the supposed absence of Jesus in the Talmud, are slowly being discredited after having held sway for centuries. David Klinghoffer elucidated this development in his essay, “What the Talmud Really Says About Jesus”:

“…the scandalous passages indeed refer not to some other figure of ancient times but to the famous Jesus of Nazareth. What exactly is so scandalous? How about Jesus punished in Hell for eternity by being made to sit in a cauldron of boiling excrement? That image appears in early manuscripts of the Babylonian Talmud, as does a brief account of Jesus’ trial and execution—not by the Romans but by the Jewish high court, the Sanhedrin.” (Publishers Weekly, January 31, 2007).

Mr. Klinghoffer says that the “Jewish community” has been content to let the evil sayings of the Talmud about Jesus “remain obscure and unknown.” His claim is erroneous. The rabbinic “community” actively teaches these viciously bigoted statements about Jesus within their religion, while denying to the world that they are present in their sacred texts. These inconvenient facts must not be suppressed. The admission by Klinghoffer and other Judaic intellectuals that Jesus Christ is indeed targeted in the Babylonian Talmud, has brought with it no substantive analysis of the long record of rabbinic denials and falsification that preceded his revelation, and which continue in some instances, up to the present time. Mr. Klinghoffer is eager to have us pass over Judaism’s system of dissimulation as quickly as possible.

Christians and Muslims are rightly offended at the disgraceful libels, pornographic scurrilities and hate speech in the Talmud. Louis Farrakhan, virtually alone among public figures in America, has had the courage to defend Jesus against these obscenities. 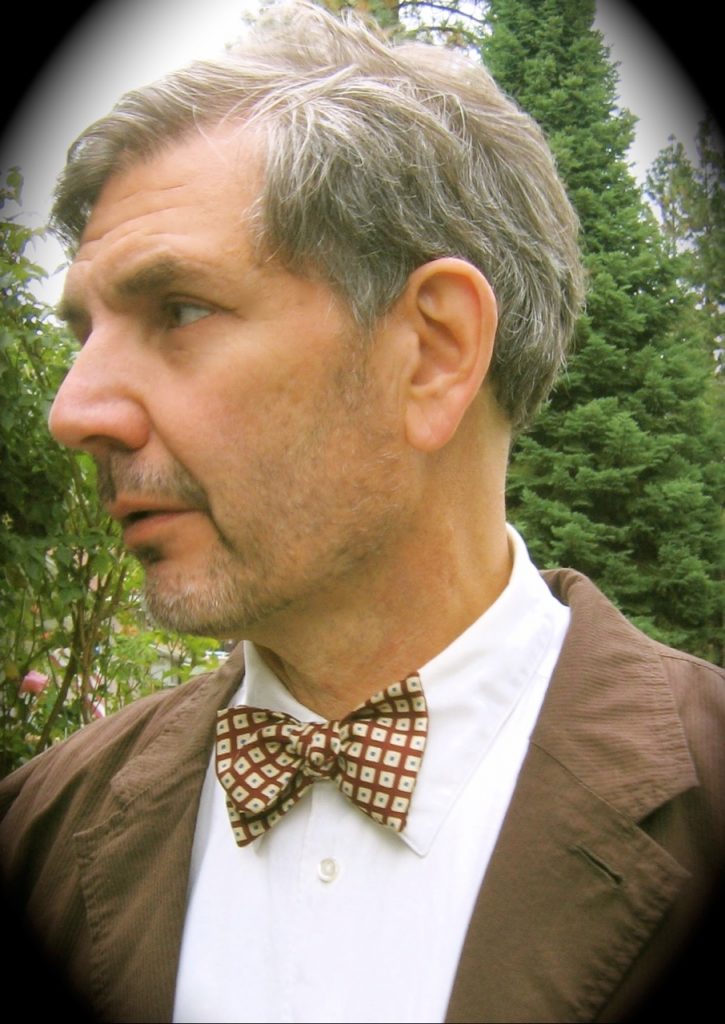 Michael Hoffman is a former reporter for the New York Bureau of the Associated Press and the author of nine books, including Judaism Discovered and Judaism’s Strange Gods. 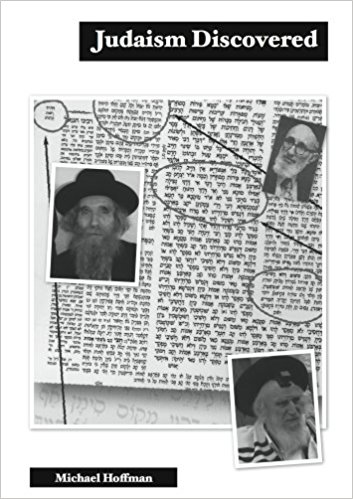 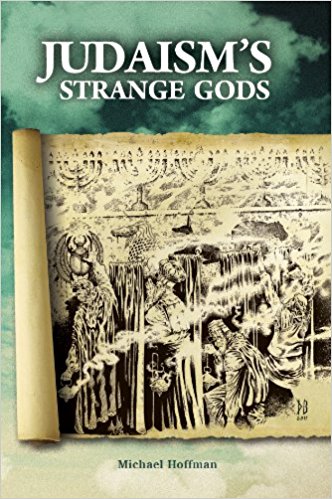