The Anti-Defamation League has recently issued a report that claims a “disturbing 86% spike in domestic anti-Semitic incidents in the first quarter of 2017…” Its antidote is, of course, more of the ADL! The “startling rise,” ADL head Jonathan Greenblatt says, requires that his organization insert its programs into the public school systems in order to “stamp out this wave of hate.”

Blacks must be very careful, because the ADL has similarly imposed its “training programs” on American police forces. The ADL carts US law enforcement personnel over to Israel to learn how Israeli police keep Palestinians in a constant state of apartheid. And how has that ADL “law enforcement training” worked out for us? Based on nationwide data collected by the Guardian, Black Americans are more than twice as likely as their white counterparts to be killed by police. In 2016, police killed Blacks at a rate of 6.66 per 1 million people, compared to 2.9 per 1 million for whites. Thanks, ADL.

So a closer examination of the ADL’s latest and highly dubious claims about “an upsurge in ‘anti-Semitism’” is fully warranted. The ADL points to dozens of what it calls “anti-Semitic incidents,” but it should be emphatically noted that the incidents ARE NOT based on police reports—they are based on reports made to the ADL itself, on just the word of the alleged victim.  The ADL numbers include alleged incidents of school “bullying,” “harassment,” and “vandalism”—whatever that means. Of course, ANY violation of ANYONE’s civil rights is to be taken seriously, but Jonathan Greenblatt’s private and UNOFFICIAL statistics are being relied upon to change laws and policies that affect the Black community, so they MUST be thoroughly parsed and rigorously questioned.

For instance, the ADL’s numbers include the recent spate of threats against the American Jewish community centers. But when those reports first surfaced in mid-January of 2017, even President Donald Trump voiced his doubts about the veracity of the Jewish claims in an unusual public statement:

Trump suggested that the attacks could reflect something other than anti-Semitism, saying that “the reverse can be true” and “someone’s doing it to make others look bad…”

The Anti-Defamation League was so alarmed at the President’s insinuation that it told Buzzfeed: “We are astonished by what the President reportedly said. It is incumbent upon the White House to immediately clarify these remarks.” 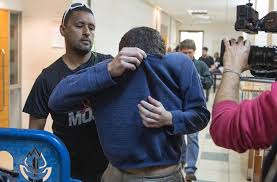 Turns out Trump was right and the ADL needed to “clarify its remarks.” Police arrested an Israeli Jew named Michael Kadar for making multiple violent threats against American Jewish centers. The USA TODAY headline said it all: “Jews shocked that suspect in Jewish center threats is one of their own.” Later, Kadar was charged with making more than 2,000 threats! The indictment said that the Jewish Israeli jihadist threatened a US senator and ordered drugs online to send to the senator’s house. He threatened to kidnap and kill the children of a CIA and Pentagon official. The indictment alleged that Kadar made a bomb threat against an El-Al flight to Israel that sparked fighter jets to be scrambled, and he threatened a Canadian airport, which required passengers to disembark in emergency slides and left six people injured. He is also accused of threatening a Virgin Air flight—a threat that resulted in the plane having to dump eight tons of fuel before landing—and threatening a plane being used by the NBA’s Boston Celtics.

Incredibly, this reign of terror was blamed on “autism and a brain tumor.”

They have yet to explain how reports of vandalism against Jewish cemeteries in the United States seem to have directly coincided with the threats made from Israel by the terrorist Michael Kadar, which suggests a deeper internationally coordinated false-flag conspiracy. The ADL seems to have dropped the investigation of these incidents, but continues to use the hoax statistics.

Michael Kadar is not the only Jewish terrorist helping to generate the ADL’s alleged “wave of hate.” Another Jewish man named Joshua Goldberg was arrested for posting online bomb-making instructions while posing as an “ISIS jihadist.” Mr. Goldberg’s terroristic résumé as posted on his Wikipedia page is shocking:

Goldberg first received widespread media attention under his alleged Twitter handle “Australi Witness” following the Curtis Culwell Center attack, a terrorist attack on a Garland, Texas exhibit featuring images of Muhammad in May 2015, in which two assailants died in a shootout with police. Goldberg’s “Australi Witness” persona, had, posing as a Perth jihadist, called for an attack on, and posted maps of, the center where the exhibit was taking place, and praised the jihadist attackers in its aftermath, and was retweeted by one of the assailants before the attack. His trial was suspended after it emerged that he had previously been diagnosed with schizophrenia and anxiety disorder as part of a long history of mental illness, and he was found incompetent to stand trial pending efforts by doctors to return him to competence.

Notice that, just as with Kadar, the diagnosis is not Jewish terrorism—but mental illness.

There is yet more false-flag self-inflicted Jewish terrorism. CommonDreams.org website is a prominent voice in left-wing politics. It prides itself on being a major forum for dialogue and debate on many societal issues. But it noticed a strange phenomenon. The comments sections of its posted articles were aflame with unusually harsh anti-Semitic rhetoric by a number of posters with the names DeShawn Williams, Rashid, Aziz, Ahmed, and the monikers PowertodaPeople, SynagogueofSatan, among many, many others. They advanced every anti-Jewish conspiracy theory and even praised Naziism and Adolf Hitler.   Thes 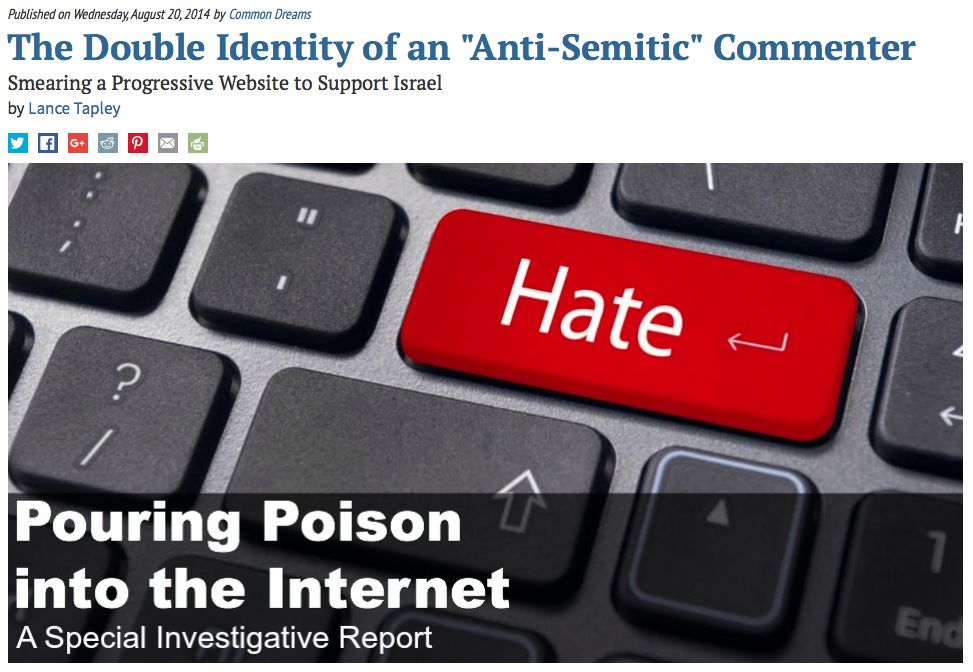 e “contributors” with Black- and Muslim-sounding names often debated each other on the pages of commondreams.org, stepping up the hateful rhetoric with each exchange. So distasteful were these postings that the regular readers stopped visiting and contributing to the website and its mission.

CommonDreams.org started to investigate and found that all of the posters and the postings—on both sides of the many, many Jew-hating exchanges—were coming from the same computer IP address and the same person: a Harvard-affiliated Jewish man whose stated motive for this flood of cyber-filth was to support Israel. Lance Tapley’s investigative report, “The Double Identity of an ‘Anti-Semitic’ Commenter Smearing a Progressive Website to Support Israel,” identifies this person as “a graduate student at the Midwestern campus,” who spent endless hours filling the “comments” sections of many websites, with anti-Jewish language and bigoted, violent, and murderous ideologies. Curiously, despite the volume and intensity of the pure hate expressed by this Jewish “grad student”—which he intended for readers to believe came from Blacks and Muslims—CommonDreams.org is actually protecting the man’s real identity, claiming “as a Jew…he could be put in danger by such a revelation.” Well, what about the Blacks and Muslims who are HIS targets, victims of his slanderous, hate-filled bile? And the “hate-crime”-crusading ADL has made no effort to identify, apprehend, or prosecute this Jewish man, who has single-handedly spread more “hate” than any other known source on the Internet.

But the ADL is not complaining—they just add this JEWISH-generated slime to their statistics and falsely claim Jews are victims. Similarly, when the Israeli Mossad pulled off the greatest act of false flag terrorism in history—the attacks of 9/11—they did not claim “mental illness.” They claimed victimhood and plunged the world into war against an innocent people. The media, a totally controlled and dutifully submissive mouthpiece for the ADL, aids and abets the ADL’s false flag agenda.

It is this faked and contrived “threat” that allows the ADL and its director Jonathan Greenblatt to falsely claim that “anti-Semitism” is rampant and on the rise, and that the Honorable Minister Louis Farrakhan and the Nation of Islam are at the root of it.

The ADL and its false flag mission is an insult to all Americans, who are being bullied into accepting the suppression of their rights and censorship of their discourse. Fortunately, more and more Americans are seeing through the schemes and are exposing the Synagogue of Satan, the REAL source of world hate and terrorism. Responsible Jewish leaders must stand up and put an end to this ADL false-flag strategy, because it’s hurting the Jewish community, diminishing their reputation and their position in the eyes of the world.