A new book about the life of Jesus has enabled us to clear up some theological confusion and to see the divine significance of The Honorable Minister Louis Farrakhan’s unyielding call for Land, Land, Land! Listen VERY CAREFULLY to The Minister’s statement from Part 30 of his landmark “The Time And What Must Be Done” lecture series:

The Minister is rejecting the offered “legal tender,” for God Himself has promised His Chosen People land.

Dr. Reza Aslan’s new book, Zealot (Random House, 2013), has become a New York Times bestseller. A Ph.D. scholar of religion, Aslan chronicles the life of Jesus of Nazareth and the volatile political environment into which he was born. 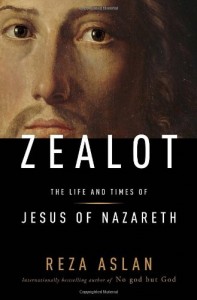 According to Dr. Aslan, early in his ministry Jesus was part of a group of Jewish rebels in the Holy Land known as the Zealots, radical men who fervently hated the Roman occupiers and their emperor Julius Caesar. Further, they bitterly hated all of the Jewish uncle toms running the synagogue who collaborated with and aided the Romans. The Zealots believed that the LAND on which they lived was promised to them—the Jews— by God Himself and that that land was the core and essence of their independence and freedom. Aslan says that this reality of Jesus’ more radical bearing becomes clear when one properly understands a widely quoted but wholly misinterpreted biblical passage. Almost everyone knows of the exchange in Matthew 22:15-22, in which Jesus was asked whether it was lawful for Jews to pay taxes to Caesar. Jesus is said to have replied, “Render unto Caesar the things that are Caesar’s, and unto God the things that are God’s.” Jesus’ rather arcane and opaquely wise response, according to Aslan’s research, actually had a much deeper significance. “The truth is that Jesus’s answer is as clear a statement as one can find in the gospels on where exactly he fell in the debate between the priests and the zealots—not over the issue of the tribute, but over the far more significant question of God’s sovereignty over the land.”

Jesus was saying precisely what Minister Farrakhan said in 2013, in essence: “I don’t want your worthless money—we want our promised land!”

The confrontation had very specific political relevance for the peasantry of Nazareth, but Aslan argues that the passage was watered down over time by the early leaders of the Christian church as they sought to make Jesus a man with worldwide appeal.

So Jesus was demanding land—not fidelity to some vague theological principle. And his unyielding demand for land is what sealed his fate with the Jewish priesthood, who were plotting his murder. Jesus’ answer, Dr. Aslan states, “seems to [have been] enough for the authorities in Jerusalem to immediately label Jesus as lestes. A bandit. A zealot.” A couple of days later, Jesus was seized by the Romans for the final time.

Two thousand years later, we have an eerily similar story developing among the ex-slaves in the American South. Aslan’s description of the oppressive economic conditions that drove Jesus and the Zealots of Galilee could have come directly from an American history book on the post-Civil War Reconstruction period:

“Those [Galileans] who managed to remain on their wasted fields often had no choice but to borrow heavily from the landed aristocracy, at exorbitant interest rates. Never mind that Jewish law forbade the charging of interest on loans; the massive fines that were levied on the poor for late payments had basically the same effect. In any case, the landed aristocracy expected the peasants to default on their loans; they were banking on it. For if the loan was not promptly and fully repaid, the peasant’s land could be confiscated and the peasant kept on the farm as a tenant toiling on behalf of its new owner. Within a few years after the Roman conquest of Jerusalem, an entire crop of landless peasants found themselves stripped of their property with no way to feed themselves or their families.”

Readers of The Secret Relationship Between Blacks and Jews, Vol. 2, will recognize this as identical to the conditions Blacks faced after slavery when they quickly found themselves re-enslaved by debt to Jewish merchants all over the cotton-growing regions. And out of their yearning for justice Blacks produced a man whose voice represented the masses. The Most Honorable Elijah Muhammad left Georgia with the name Elijah Poole, and after having been taught by Allah in the Person of Master Fard Muhammad beginning in 1931, he began to articulate with laser precision the significance of the land:

“We must understand the importance of land to our nation. The first and most important reason that the individual countries of Europe, Africa and Asia are recognized as nations is because they occupy a specific area of the earth….So remember, we cannot demand recognition until we have some land that we can call our own.”

And—just as with Jesus—once he demanded land, The Messenger of Allah became the target of death plots, which, he said, went all the way back to 1935.

Another voice arose from the cries of America’s oppressed, and though his legacy has been redefined as that of an accommodationist and a “dreamer,” we now know that just before his murder by the United States government Dr. Martin Luther King had shifted his focus from politics to LAND. He emerged from his 1966 meeting with The Most Honorable Elijah Muhammad with these very Zealot-like words: “We suffer domestic colonialism….We must achieve self-determination.” In 1968, he spoke at a rural Mississippi church that brought LAND front and center:

“At the very same time that America refused to give the Negro any land, through an act of congress our government was giving away millions of acres of land in the West and the Midwest, which meant that it was willing to undergird its white peasants from Europe with an economic floor. But not only did they give the land, they built land grant colleges with government money to teach them how to farm. Not only that, they provided county agents to further their expertise in farming. Not only that, they provided low interest rates in order that they could mechanize their farms. Not only that, today many of these people are receiving millions of dollars in federal subsidies not to farm and they are the very people telling the Black man that he ought to lift himself by his own bootstraps. This is what we are faced with and this is a reality. Now, when we come to Washington in this [Poor People’s] campaign, we’re coming to get our check.”

King may have concluded with a “check,” but all that his enemies heard was his clear reference to LAND, and especially his understanding of land as an “economic floor.” Within days of uttering these 169 words, Martin Luther King was dead.

In 1964, Malcolm X began the Organization of African American Unity (OAAU), and turned away from many of the positions he had held as a minister in the Nation of Islam. This delighted the Jews and the FBI but, unacceptably, Malcolm’s new OAAU maintained at its core the demand for land. In a secret 1969 memo, published in Ward Churchill’s book The COINTELPRO Papers (p. 102), the United States government took credit for the assassination of Malcolm X.

The Black Panther Party emerged from the ghettoes of America having been strongly influenced by The Nation of Islam. Its “Ten Point Program” demanded “land, bread, housing, education, clothing, justice, and peace.” The Party argued that the racist government had robbed Black people “and now we are demanding the overdue debt of forty acres and two mules…” Black scholar and activist Dr. Angela Davis wrote that “police, assisted by federal agents, had killed or assassinated over twenty black revolutionaries in the Black Panther Party.”

Kwame Ture (the former Stokely Carmichael) started the All-African Peoples Revolutionary Party, with one idea in mind: “In the final analysis all revolutions are based on land.” In 1998, Bro. Kwame Ture died of prostate cancer, which, he charged, was given to him by the FBI.

With this murderous history in mind, let us think very carefully about the significance of Our Minister Farrakhan’s strident call for land, separation, and independence. The histories of the most important figures in the hearts and minds of America’s Blacks prove that the righteous demand for land will incite our eternal oppressors to lethal retribution. In his introducing Muhammad’s Economic Blueprint, Minister Farrakhan is perfectly consistent with Allah’s clear commandment that His Chosen People settle in the Promised Land. Our embracing this vision is our absolute destiny, and requires that on our way across the Jordan River, we as quickly as possible learn the fine points of agriculture, land management, animal husbandry, ecology, and all the related sciences and professions, to transform the raw materials of our land into useful products. Jesus, Mr. Muhammad, Dr. King, and Min. Farrakhan ALL pointed to our destiny as true land lords, and history tells us that this divine mission is, for Blacks, a matter of life and death.