“Don’t fire until you see the whites [of their eyes]!”
—Colonel William Prescott at Bunker Hill 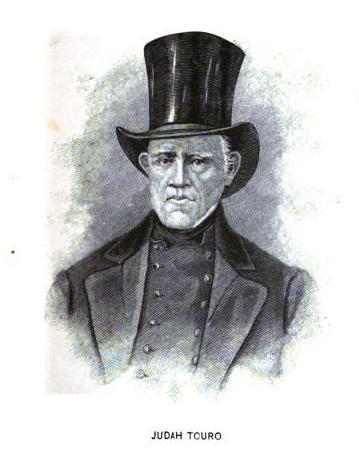 The Bunker Hill Monument opened to the public in 1842, and it was built to commemorate the June 1775 Revolutionary War Battle of Bunker Hill. The battle itself actually took place on nearby Breed’s Hill and included the forced participation of at least 36 Blacks who could gain nothing by the risking of their lives. It was a war that, while freeing the European colonists from England’s control, only served to plunge the African even deeper into slavery in America for the next 100 years. It is entirely appropriate, therefore, that the 221-foot obelisk celebrating white freedom was financed by a slave-owner—and a Jewish one at that.
In 1830, a “Jewish philanthropist” named Judah Touro teamed with a Boston Christian to finance the structure with a total grant of $20,000 (about $2 million today). Boston was so pleased to take the slave dealer’s money that they inscribed words of gratitude at the base of the monument:
“Christian and Jew, they carry out one plan, For though of different faith, each in his own heart a man.”
Touro (1775–1854) was born in Newport, Rhode Island, and became the leader of the Jewish synagogue that he bought and renovated. Black slaves actually helped to build the original Newport synagogue, whose congregants included two Jewish slave-merchants who “owned the most successful slaving business in the state.”

Jewish historian Leon Hühner wrote that Touro bought slaves “to wait on him, or to work in his various enterprises.” In 1809, he profited from the auctioning of 12 African people, and in 1812 he advertised rewards for the apprehension of seven Black runaways. He also did extensive business in merchandise such as rag clothing, which was to be used specifically by slaves.

Touro was “one of the earliest of prominent American philanthropists,” but Jewish historian Morris U. Schappes notes that “Negro institutions and causes, perhaps needing assistance most, were not among Touro’s beneficiaries.” As late as 1947, Blacks were not admitted to the hospital facilities of the Touro Infirmary in New Orleans.
See The Secret Relationship Between Blacks & Jews: https://noirg.org/store/