The lead rabbi of the Simon Wiesenthal Center, Abraham Cooper, no longer peddles his discredited history of Jewish friendship with Blacks like he used to. Last year he teamed up with the center’s resident historian Dr. Harold Brackman in an ill-advised attack on the Honorable Minister Louis Farrakhan. Both Cooper and the Wiesenthal Center were profoundly humiliated when Nation of Islam researchers uncovered a devastating 632-page confidential manuscript written by Brackman more than 30 years ago that casually presented the same lengthy history of Jewish slave-dealing and racism that the Wiesenthal Center now employs him to publicly deny.

In his own handwriting Brackman verified a number of ugly historical realities, including the fact that ancient Talmudic rabbis invented and spread the most destructively racist lie ever told—the so-called Curse of Ham myth—a libel that provided the philosophical foundation for Black slavery. He also revealed that the Arab trade in African slaves was conducted by “camel-riding merchant Jews”; and he further confirmed that in Brazil, the destination of 90 percent of all kidnapped Africans, slave trading became a “Jewish mercantile specialty”! Needless to say, after The Final Call broke the story, Rabbi Cooper knew he needed another “historian”—one that can alter history the way Jewish Talmud writers altered the scriptures.

In his hate-laced op-ed in the Pittsburgh Post-Gazette, the racist rebbe left Mr. Brackman on the sidelines and took aim at beloved Black journalist Bev Smith for inviting Minister Farrakhan to address Black people about issues facing their community. Let us note carefully that Rabbi Cooper’s missive came days after Sis. Bev publicly responded to the sudden hail of Jewish condemnation. She wrote on her website:

“What infuriates me is that I have not heard from these groups on their position on issues that affect the Black Community ever….Their suggestion for us to not have Minister Farrakhan at the table for this important discussion, reminds me of what white slave owners use[d] to do to their black slaves, and that is to tell the slaves how to meet, what to talk about and who to talk to.”

And as if on cue, Rabbi Cooper’s harangue entirely ignored her statement as if she actually were his slave. Like all the other Jewish critics, Rabbi Cooper offers Sis. Bev or Black Pittsburgh not a single solution to the many, many problems the show was determined to address—not one.

Nor does Cooper offer a single penny from that gigantic “nazi-hunting” budget toward any remedy that the Black community may decide on. Nothing from the gaggle of unholy hecklers that includes the loud-mouthed Jewish Chronicle editor Lee Chottiner, the slip-and-fall attorney David Ainsman, and the ultra-Zionist Jeffrey Finkelstein, who all together have become the mouthpiece for the Caucasian Jews of Pittsburgh. The Jewish Federation’s website trumpets all the group’s activities from bar mitzvahs to anti-Palestinian legislative arm-twisting—but absolutely nothing at all that addresses any issue Bev Smith wanted to deal with. It comes as no surprise to anyone what The Secret Relationship Between Blacks and Jews, Vol. 1, revealed: that the very first Black in Pittsburgh was in fact enslaved by a Jewish merchant named Levy Andrew Levy. It is hard for them to let a good thing go.

In deciding to assail Bev Smith’s superior wisdom and good sense, Rabbi Cooper abandons history altogether to broach a subject that Sis. Bev never mentioned and never intended to discuss—the issue of Israeli “Zionism,” that monstrous White supremacist colonization scheme that ran the ancient inhabitants off their Palestinian homeland in precisely and exactly the same way Columbus ran the Caribs and Arawaks off theirs. By now, the only pro-Zionists left on the planet are either those gangsters in the Israeli Knesset, or their underlings in the U.S. Congress, or the old die-hard South African apartheid officials still thankful for the many, many years of unwavering support from their fellow Caucasians in Tel Aviv. Even Cooper admits that anti-Zionism “is making serious inroads in the mainstream of society”—and for every dark-skinned human being it is not a moment too soon.

But Rabbi Cooper’s next claim is his all-time most bizarre. He uses the most revered icon of the Civil Rights Movement to do something beyond the skill of a thousand Houdinis—make Zionism, a racist political scheme, synonymous with the religion of Judaism, a revealed Word of God. Cooper wrote that “Rev. Martin Luther King Jr., shortly before his assassination, warned: ‘When people criticize Zionists, they mean Jews. You’re talking anti-Semitism.’” The problem here—beyond the idiocy of the premise—is that there is no proof that Dr. King ever said it! The quote is a fiction made up by Caucasian Zionists to gain credibility for a fundamentally bigoted philosophy that Dr. King himself could never support. It was declared a hoax in 2002 by the Jewish-American History Documentation Foundation, and there remains no record of Dr. King making any similar statement any time, anywhere. But they still could not let it go. Zionists like the Wiesenthal’s disreputable rabbi simply reinvented the quote and continue to spread it unashamedly.

For Cooper to use a suspect quote from the legendary leader of the poor and downtrodden to stifle any criticism of today’s murderous Israeli regime is a clear sign of Zionism’s long-overdue demise. But here is a statement we can prove that Dr. Martin Luther King made related to the Middle East. He wrote that “Peace for the Arabs means the kind of economic security that they so desperately need. These nations, as you know, are part of that third world of hunger, of disease, of illiteracy….So there is a need for a Marshall Plan for the Middle East, where we lift those who are at the bottom of the economic ladder and bring them into the mainstream of economic security.” Of course, we’re still waiting for the Zionists to stop quoting Dr. King and actually follow him. If a “Marshall Plan” to Rabbi Cooper means endless and brutal military occupation, mass Arab imprisonment, theft of Palestinian land, and the systematic murder of Palestinian leaders, then the Reverend Dr. King would be profoundly disappointed.

Martin Luther King was murdered 43 years ago and thus did not fully witness the horrifying reality that Israel represents to Blacks of the world today. Nobel Peace Prize winner Bishop Desmond Tutu of South Africa, however, is still alive and knows something about oppression. He was selected by Rep. James Clyburn and the Congressional Black Caucus to speak at President Obama’s historic inaugural event honoring Dr. King, because he is seen as a representative of Dr. King’s legacy of struggle. Read Bishop Tutu’s words from 2002: 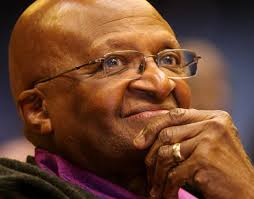 I’ve been very deeply distressed in my visit to the Holy Land; it reminded me so much of what happened to us black people in South Africa. I have seen the humiliation of the Palestinians at checkpoints and roadblocks, suffering like us when young white police officers prevented us from moving about….I have experienced Palestinians pointing to what were their homes, now occupied by Jewish Israelis.…Have our Jewish sisters and brothers forgotten their humiliation? Have they forgotten the collective punishment, the home demolitions, in their own history so soon? Have they turned their backs on their profound and noble religious traditions? Have they forgotten that God cares deeply about the downtrodden?

This quote is not a hoax. Bishop Tutu is an eyewitness to the Israeli misbehavior, echoing the very point Minister Farrakhan has been making for decades: that the practices of Israeli thieves of Palestinian land have absolutely nothing to do with the godly principles of the religion of Judaism. And in this opinion Bishop Tutu and Minister Farrakhan are joined by a significant population of Jews who have voiced profound opposition to Zionism for the very same reasons.

Our great fighter, the Honorable Minister Louis Farrakhan, came to Pittsburgh to offer a word of hope and insight, real strategic and substantive solutions, and actual resources to our people in Pittsburgh—just as Sis. Bev Smith asked him to do. After all, the Honorable Minister Louis Farrakhan has been doing exactly that for fifty extraordinary years! Our wonderful Sister Bev Smith has made a bold, powerful, and completely logical step to use the power of her radio show to make a difference in the community she obviously loves and cares about. Jewish leaders like Cooper, Ainsman, Chottiner, and Finkelstein have chosen to become disruptions to this internal Black healing, repair, and redemption. Bev Smith and panelists Rep. James Clyburn, civil rights veteran Dorothy Tillman, and Minister Louis Farrakhan are saying to the world that Blacks will solve their own problems and develop their own solutions despite this unproductive intrusion by those who offer nothing but unrighteous scorn and derision in the face of extraordinary Black need.