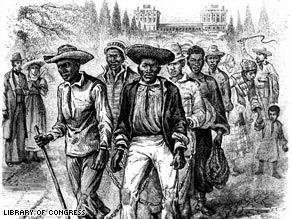 A wood engraving of handcuffed and shackled slaves passing the U.S. Capitol depicts a scene circa 1819.

Talk show host Bill O’Reilly said that slaves who built the White House “were well fed and had decent lodgings provided by the government.”

Besides providing his solution for American homelessness and hunger—slavery—O’Reilly has now forced white people to face the hidden truth about the slave trade in the nation’s capital.

Africans have always been in and around the District of Columbia for many generations. It was just a few miles down the Potomac that the first “20 negars” came into bondage in Jamestown—after the extermination of the rightful landlords, the Algonkins, the Susquehannocks, the Senecas, and the Piscataways.

The very area where Barack Obama took the oath of office in 2009 is the location of the tent city that housed the Black builders of the U.S. Capitol. And at least 400 of the 600 carpenters, masons, artisans, and skilled laborers—more than two thirds—were enslaved Black Africans. The building of Washington required the importation of so many highly skilled Black craftsmen that the District became known as “the Congo of America.” 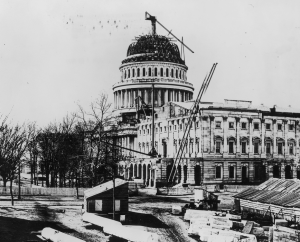 The last time “emancipation” for Blacks was declared, in 1863, it brought real convulsions to the capital city. When rumors of Lincoln’s Proclamation began to spread, Africans converged on the capital. One is quoted: “I want to stay around where the President lives. I figure if he eats, I’ll eat.”

Four hundred ex-slaves camped in what was called “Duff Green’s Row” on Capitol Hill behind the present Library of Congress; 4,000 in “Camp Barker,” near what is today Logan Circle; 10,000 crammed into “Murder Bay” (between 13th and 15th Streets and Ohio Avenue and the canal) and into “Foggy Bottom” below Georgetown. The local newspaper captured the feelings of most white people:

INFLUX OF CONTRABANDS. Just about these days there seems to be quite an influx of strange colored persons in our city. Each is telling some large story about his escape from slavery and his sufferings. These persons come here expecting to be taken care of by “white folks,” and disappointed in that expectation, resort to means for a living not countenanced in this community. Two or three of the species were before the police magistrate this morning, and were summarily disposed of by sending them to the penitentiary. They are only placed where they can earn a living, and not sponge it out of citizens.

Such was the mentality of white people as they grappled with “emancipation” and watched their chickens come home to roost. Their direct involvement in the growth of the American slave trade was deep indeed. After the 1808 U.S. ban on the trans-Atlantic slave trade, cotton planters of the Deep South could no longer easily get field hands from Africa. This fueled the rise in human breeding of Black people within the United States. The most vicious mistreatment of Black women in American history occurred during this time as they were forced into becoming industrial breeders.

Different states gained reputations for having better methods and techniques for producing quality slaves than others. One incredible example of this is when the Jewish slave trader Levy Jacobs was accused of misrepresenting the source of his merchandise. In response he posted this in a New Orleans newspaper:

Notice — A report being circulated that I have for sale no other than Kentucky slaves, I beg leave to state to the public that all the Negroes which I have on hand, and shall hereafter keep for sale are and will be Virginia born Negroes, of good character; that the person who has stated to the contrary, with the view of injuring me, I call upon in this public manner to come forward and support this charge if he can, or hereafter hold his peace. All Negroes sold and bought by me from traders (excepting at my own house) will be free of commission. —L. Jacobs

Washington, DC—the purported “home of the free”— became the center of this horrific slave-breeding market. In fact, George Washington himself was breeding slaves at his Virginia plantation. At one time as many as 1 in 4 of his 300 slaves were infants and young children. An assortment of white slave traders operated from the capital’s many tavern barrooms, including the notorious Franklin & Armfield. By 1830, wholesale traders marched their chained and shackled Africans right past the Capitol, even while the Congress sat in session. One observer wrote,

The auction block, the lash, and the manacled gangs on their way to the Deep South were as much a part of Washington as the steamy climate, the malaria, the marshes, and the dust. 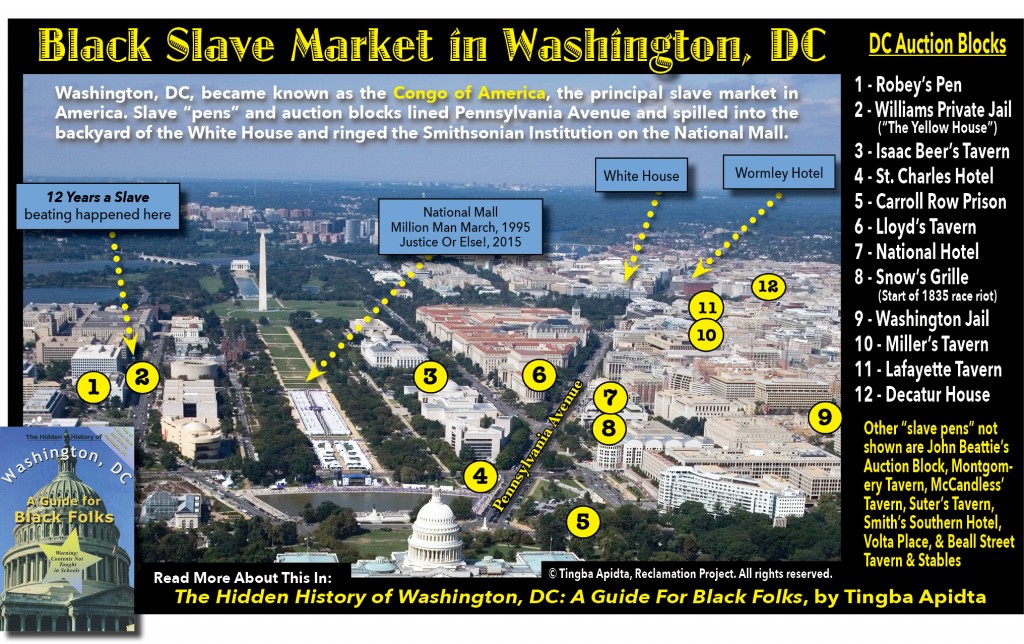 The United States government not only condoned the slave trade in the District but also afforded the traders every public accommodation. For 34¢ a day the federal jails could be rented by the traders to house the slaves headed for market. White criminals would sometimes have to wait for accommodations in favor of the more lucrative traffic in Black slaves. 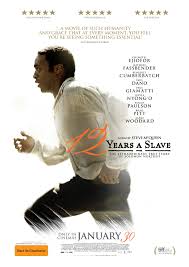 In the Christmas season of 1837, a “free” Black woman and her four young children were torn from their husband and father and locked in the District jail to be held for shipment to the South. Distraught and afraid, she resolved that her babies would not grow up as slaves and proceeded to kill them with her bare hands. Two of her children died before she could be restrained. She was tried for murder and acquitted on grounds of insanity. Her white enslaver returned her to her previous owner for breach of warranty—she had been “warranted sound, mind and body.”

The privately owned slave pens, called “Georgia Pens,” were the scenes of endless tragedies and gruesome horrors. One of those dungeons was known as Williams Private Jail (a.k.a. The Yellow House). Owned by William H. Williams, it was a three-story brick dwelling, covered with plaster, painted yellow and standing in full sight of the Capitol. It had staples driven into its walls where Blacks were “chained like wild animals.” Black children were kept at the Yellow House “to fatten” before sale. (Why are so many Blacks today named Williams?)

In 1841, trader James H. Birch kidnapped and drugged Solomon Northrup, the author of the memoir Twelve Years a Slave. Birch stowed him at the Yellow House before shipping him to New Orleans.

Slave Beating scene from the film Twelve Years a Slave

The white man beat him with a paddle until it broke and then whipped him with a cat-o’-nine tails, a scene which is portrayed in the 2014 movie. Solomon addresses the lashings in his memoir:

“Even now the flesh crawls upon my bones, as I recall the scene. I was all on fire. My sufferings I can compare to nothing else than the burning agonies of hell!”

Northrup wrote that he could see the Capitol Building from the dungeon window, and visitors to the Capitol reported that they could hear the screams from the slave pens.

Robey’s Pen was just around the corner from the Yellow House; it was once called an “infernal hell,” “a wretched hovel right against the Capitol…surrounded by a wooden paling 14 or 15 feet in height, with the posts outside to prevent escape….” 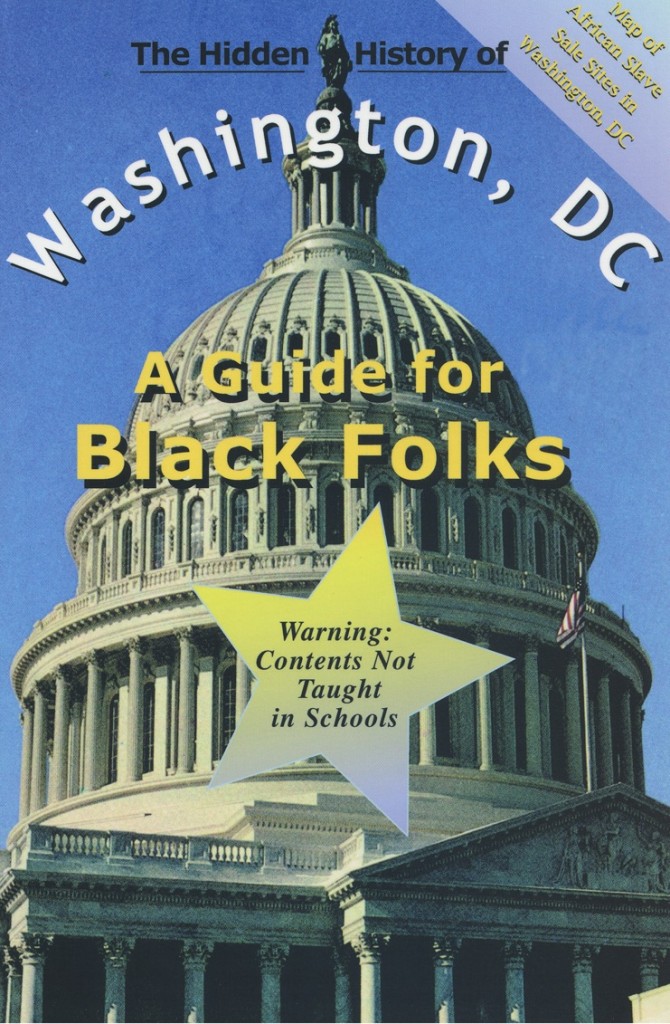 Miller’s Tavern (a.k.a. F Street Tavern) is just two blocks from Mr. Obama’s front door. It is where our distraught sister named Anna attempted suicide by jumping through an attic window to the ground three stories below. Both of her arms were broken and her back was injured, but she survived. Her white enslaver left her to languish and departed for Georgia to sell her two children.

This horrifying reality represents the true nature of America’s origins—and the unfortunate lot of those great Black builders of this nation’s capital who are the very source of the wealth and power of today’s mis-rulers.

Bill O’Reilly could never imagine the brutal world that the Black man and woman had to live in to make America the superpower it has become. But thanks to him, Blacks are more and more willing to see the ugly reality behind America’s wealth and power.

Source: The Hidden History of Washington, DC: A Guide For Black Folks, by Tingba Apidta